Energy is critical to life. However, we must work to find solution to source sustainable energy which compliments the UK’s emission targets. This article discusses six interesting facts concerning the UK’s diversified energy supply system and the ways it is shifting towards decarbonised alternatives.

In recent years, energy generation from coal has dropped significantly. In March 2018, Eggborough power station, North Yorkshire, closed, leaving only seven coal power plants operational in the UK. In May this year, Britain set a record by going one week without coal power. This was the first time since 1882!

2. Over 40% of the UK’s electricity supply comes from gas.

A natural oil and gas production in sea

While it may be a fossil fuel, natural gas releases less carbon dioxide emissions compared to that of coal and oil upon combustion. However, without mechanisms in place to capture and store said carbon dioxide it is still a carbon intensive energy source.

In 2018, the total installed capacity of UK renewables increased by 9.7% from the previous year. Out of this, wind power, solar power and plant biomass accounted for 89%.

4. The Irish Sea is home to the world’s largest wind farm, Walney Extension.

In addition to this, the UK has the third highest total installed wind capacity across Europe. The World Energy Council define an ‘ideal’ wind farm as one which experiences wind speed of over 6.9 metres per second at a height of 80m above ground. As can be seen in the image below, at 100m, the UK is well suited for wind production.

5. Solar power accounted for 29.5% of total renewable electricity capacity in 2018.

This was an increase of 12% from the previous year (2017) and the highest amount to date! Such growth in solar power can be attributed to considerable technology cost reductions and greater average sunlight hours, which increased by up to 0.6 hours per day in 2018.

Currently, the intermittent availability of both solar and wind energy means that fossil fuel reserves are required to balance supply and demand as they can run continuously and are easier to control.

6. In 2018, total UK electricity generation from bioenergy accounted for approximately 32% of all renewable generation.

A biofuel plant in Germany.

This was the largest share of renewable generation per source and increased by 12% from the previous year. As a result of Lynemouth power station, Northumberland, and another unit at Drax, Yorkshire, being converted from fossil fuels to biomass, there was a large increase in plant biomass capacity from 2017.

Decarbonisation: why must we act now? 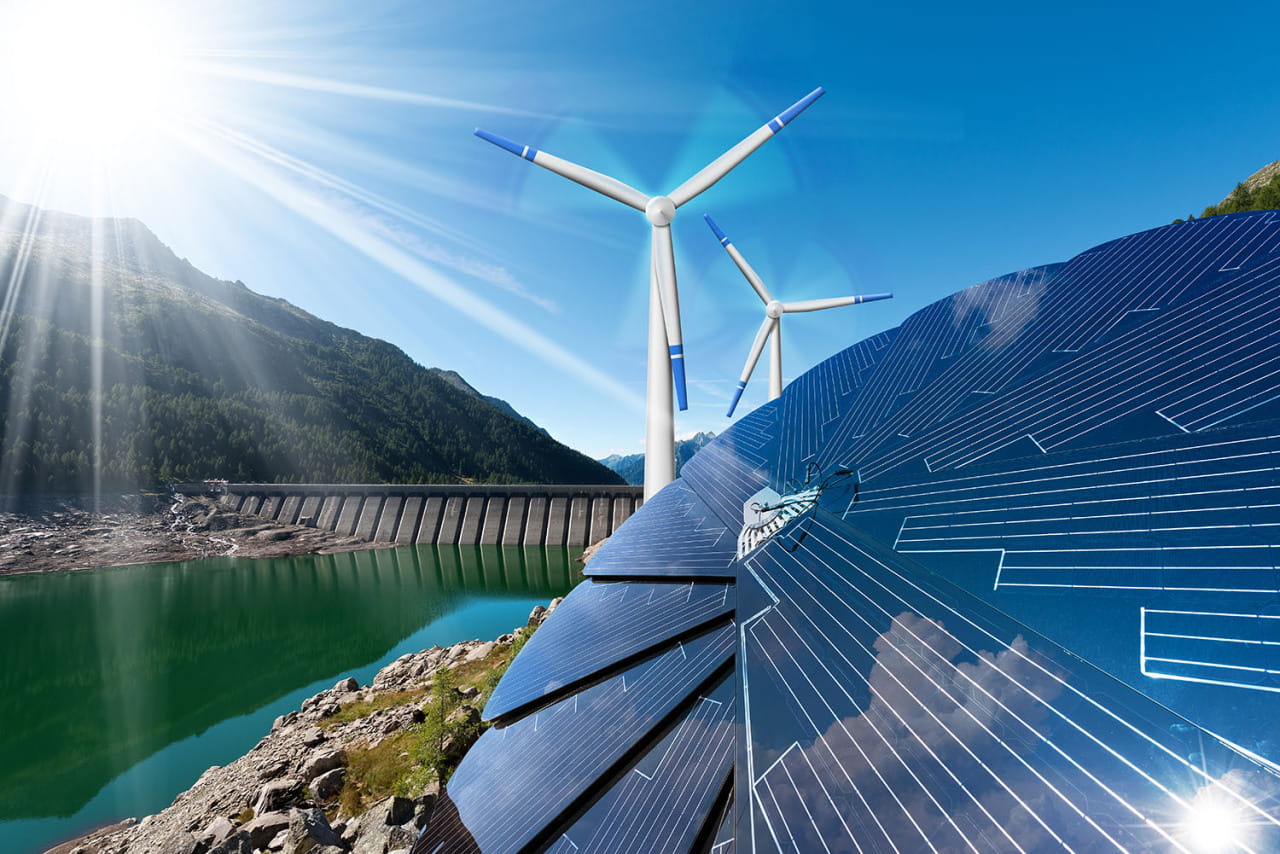 Throughout the series, you will be introduced to its members through regular features that highlight their roles and major interests in energy. We welcome you to read their series and hope to spark some interesting conversation across all areas of SCI.

The burning of fossil fuels is the biggest contributor to global greenhouse gas emissions.

According to the National Oceanic and Atmospheric Administration (NOAA), by the end of 2018, their observatory at Muana Loa, Hawaii, recorded the fourth-highest annual growth of global CO2 emissions the world has seen in the last 60 years.

Adding even more concern, the Met Office confirmed that this trend is likely to continue and that the annual rise in 2019 could potentially be larger than that seen in the previous two years.

Large concentrations of CO2 in the atmosphere are a major concern because it is a greenhouse gas. Greenhouse gases absorb infrared radiation from solar energy from the sun and less is emitted back into space. Because the influx of radiation is greater than the outflux, the globe is warmed as a consequence.

Although CO2 emissions can occur naturally through biological processes, the biggest contributor to said emissions is human activities, such as fossil fuel burning and cement production.

Weather impacts from climate change include drought and flooding, as well as a noticeable increase in natural disasters.

This warming has resulted in changes to our climate system which has created severe weather impacts that increase human vulnerability. One example of this is the European heat wave and drought which struck in 2003.

The event resulted in an estimated death toll of over 30,000 lives and is recognised as one of the top 10 deadliest natural disasters across Europe within the last century.

In 2015, in an attempt to address this issue, 195 nations from across the globe united to adopt the Paris Agreement which seeks to maintain a global temperature rise of well below 2C, with efforts to  limit it even further to 1.5C.

In their latest special report, the Intergovernmental Panel on Climate Change (IPCC) explained that this would require significant changes in energy, land, infrastructure and industrial systems, all within a rapid timeframe.

In addition, the recently published Emissions Gap report urged that it is crucial that global emissions peak by 2020 if we are to succeed in meeting this ambitious target.

Are we further away then we think?

As well as the Paris Agreement, the UK is committed to the Climate Change Act (2008) which seeks to reduce greenhouse gas emissions by at least 80% by 2050 relative to 1990 baseline levels. Since 1990, the UK has cut emissions by over 40%, while the economy has grown by 72%.

To ensure that we meet our 2050 target, the government has implemented Carbon Budgets, which limit the legal emissions of greenhouse gases within the UK across a five-year period. Currently, these budgets run up to 2032 and the UK is now in the third budget period (2018-2022).

The UK has committed to end the sale of all new petrol and diesel cars by 2040.

At present, the UK is on track to outperform both the second and third budget. However, it is not on track to achieve the fourth budget target (2023-2027). To be able to meet this, the Committee on Climate Change (CCC) urge that UK emissions must be reduced annually by at least 3% from this point forward.

We may not be sure which technologies will allow such great emission reductions, but one thing is for certain – decarbonisation is essential, and it must happen now!

Making fuel out of air

Engineers say they have demonstrated a cost-effective way to remove carbon dioxide from the atmosphere. The extracted  CO2 could be used to make new fuels or go to storage.

The process of direct air capture (DAC) involves giant fans drawing ambient air into contact with an aqueous solution that traps CO2 . Through heating and several chemical reactions, CO2 is re-extracted and ready for further use.

‘The carbon dioxide generated via DAC can be combined with sequestration for carbon removal, or it can enable the production of carbon-neutral hydrocarbons, which is a way to take low-cost carbon-free power sources like solar or wind and channel them into fuels to decarbonise the transportation sector,’ said David Keith, founder of Carbon Engineering, a Canadian clean fuels enterprise, and a Professor of Physics at Harvard University, US.

DAC is not new, but its feasibility has been disputed. Now, Carbon Engineering reports how its pilot plant in British Columbia has been using standard industrial equipment since 2015. Keith’s team claims that a 1 Mt- CO2 /year DAC plant will cost $94-$232/ton of  CO2 captured. Previous theoretical estimates have ranged up to $1000/ton.

However, growth is variable. The UK and Germany alone contributed to 56% of the expansion in the past three years. There is also a ‘bias’ for wind, with a 19% increase in 2017, due to good wind conditions and huge investments, the report says.

‘This is good news now the biomass boom is over, but bad news in that solar was responsible for just 14% of the renewables growth in 2014 to 2017.’

The EU’s 2030 goals for climate and energy. Video: European Commission

Germany remains top of the European league, with the largest total installed wind-power capacity; worth 42% of the EU’s new capacity in 2017, followed by Spain, the UK, and France. Denmark boasts the largest share of wind in its power mix at 44% of electricity demand.