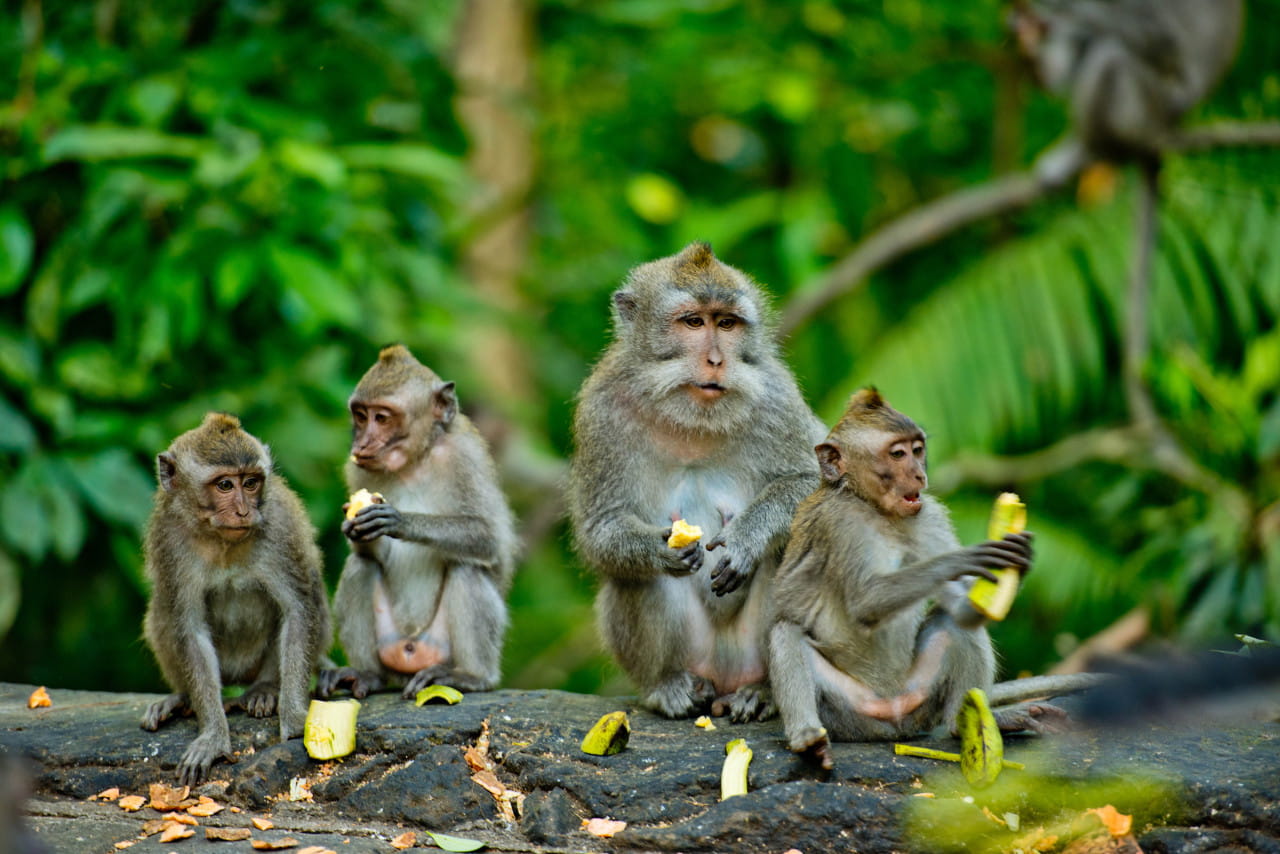 The banana colour scheme distinguishes seven stages from ‘All green’ to ‘All yellow with brown flecks’. The green, unripe banana peel contains leucocyanidin, a flavonoid that induces cell proliferation, accelerating the healing of skin wounds. But once it is yellowish and ready to eat, the chlorophyll breaks down, leaving the recognisable yellow colour of carotenoids.

The fruits are cut from the plant whilst green and on average, 10-30 % of the bananas do not meet quality standards at harvest. Then they are packaged and kept in cold temperatures to reduce enzymatic processes, such as respiration and ethylene production.

However, below 14°C bananas experience ‘chilling injury’ which changes fruit ripening physiology and can lead to the brown speckles on the skin. Above 24°C, bananas also stop developing fully yellow colour as they retain high levels of chlorophyll.

Once the green bananas arrive at the ripening facility, the fruits are kept in ripening rooms where the temperature and humidity are kept constant while the amount of oxygen, carbon dioxide and ethene are controlled.

The gas itself triggers the ripening process, leads to cell walls breakdown and the conversion of starches to sugars. Certain fruits around bananas can ripen quicker because of their ethene production.

By day five, bananas should be in stage 2½ (’Green with trace of yellow’ to ‘More green than yellow’) according to the colour scale and are shipped to the shops. From stage 5 (’All yellow with green tip’), the fruits are ready to be eaten and have a three-day shelf-life.

The very short shelf-life of the fruit makes it a very wasteful system. By day five, the sugar content and pH value are ideal for yeasts and moulds. Bananas not only start turning brown and mouldy, but they also go through a 1.5-4 mm ‘weight loss’ as the water is lost from the peel.

While scientists have been trying out different chemical and natural lipid ‘dips’ for bananas to extend their shelf-life, such methods remain one of the greatest challenges to the industry.

In fruit salads, to stop the banana slices go brown, the cut fruits are sprayed with a mixture of citric acid and amino acid to keep them yellow and firm without affecting the taste.

Bananas are a good source of potassium and vitamins.

The high starch concentration – over 70% of dry weight – banana processing into flour and starch is now also getting the attention of the industry. There are a great many pharmaceutical properties of bananas as well, such as high dopamine levels in the peel and high amounts of beta-carotene, a precursor of vitamin A.

Whilst the ‘seven shades of yellow’ underpin the marketability of bananas, these plants are also now threatened by the fungal Panama disease. This vascular wilt disease led to the collapse of the banana industry in the 1950’s which was overcome by a new variety of bananas.

However, the uncontrollable disease has evolved to infect Cavendish bananas and has been rapidly spreading from Australia, China to India, the Middle East and Africa.

The future of the banana industry relies on strict quarantine procedures to limit further spread of the disease to Latin America, integrated crop management and continuous development of banana ‘dips’ for extending shelf-life.

The Haber process currently helps feed more than half the world, producing 150m tonnes of ammonia a year. This is forecast to rise further, in line with the food demand of a growing world population.

And yet, it has serious drawbacks. In its traditional form, the process requires high temperatures – around 500°C – to make the extremely stable molecule nitrogen reactive.

The Haber process takes place at extremely high temperatures, similar to that of an average fire.

It also needs high pressure to shift the equilibrium towards the desired product. The process is sensitive to oxygen, meaning that nitrogen and hydrogen must be introduced as purified elements, rather than as air and water.

These requirements together make the process extremely energy-hungry; estimated to consume between 1% and 2% of global primary energy production. In 2010, the ammonia industry emitted 245m tonnes of CO2 globally, corresponding to half the UK’s emissions.

In nature, the process relies on the highly complex enzyme nitrogenase, operating at an ambient pressure and temperature. But using the entire biological system would not be economical for large-scale industrial synthesis, and thus the search for an inorganic system that matches the performance of the biological has become an important challenge.

In recent years, novel electrochemical approaches and new catalysts have yielded promising results suggesting that, at least for small-scale synthesis, other ways may have a future.

The chemical reaction that feeds the world. Video: TED-Ed

‘On the catalyst side, there is the discovery of ‘super promoters’, helping N2 dissociation, allowing lower process temperatures, while optimised catalyst formulations yield significant improvements in activity.

‘Perhaps even more exciting are new approaches in processing, for example by electrochemistry, or simply running the reaction in an electric field, or bringing plasmas into play,’ he said.

In 2013, Shanwen Tao, then at the University of Strathclyde, Glasgow, UK, and colleagues demonstrated for the first time the production of ammonia from air and water, at ambient temperature and pressure, using a proton-conducting Nafion membrane in an electrochemical approach.

Nafion, a Teflon-like material that conducts cations but neither electrons nor anions, is also used in fuel cells.

‘Electrochemical synthesis of ammonia is an important new approach for efficient synthesis of ammonia using green renewable electricity as the energy source. This could be a key technology for a possible ‘ammonia economy’,’ where ammonia replaces or complements hydrogen as an energy carrier, says Tao.

Separate efforts using different routes are being developed in Japan, with a particular focus on ruthenium as an efficient catalyst. One approach is to apply super promoters to provide electrons that destabilise nitrogen by weakening the triple bond and making the molecule more reactive for ammonia synthesis.

This was first reported in 2012 by Hideo Hosono’s group at the Tokyo Institute of Technology, who used ruthenium catalysts in combination with ‘electrides’ – a new class of ionic materials where electrons serve as the anions.

The method operates at atmospheric pressure and temperatures between 250 and 400°C, and hydrogen poisoning of ruthenium catalysts is no longer a problem.

Ruthenium is a type of metal in the platinum group. Image: Metalle-w/      Wikimedia Commons

‘This catalyst exhibits the highest activity and excellent long-term stability,’ says Hosono, who sees the future of his methods in distributed, small-scale applications of ammonia synthesis.

Hans Niemantsverdriet, director of SynCat@Beijing, China, acknowledges the rapid progress being made, but also strikes a note of caution.

‘In spite of interesting discoveries, I find it hard to imagine that these improvements will be able to replace the current large-scale and fully optimised technology,’ he says. ‘In the fertiliser area, novel technology will at best become a niche market for very special situations. Also, the CO2 footprint is hardly diminished.’

In the long term, Niemantsverdriet has hope for the ammonia economy as championed by Tao and others, providing carbon-free hydrogen from renewable energies.

‘I strongly believe that there will be scope for large industrial parks where this technology can be cleverly integrated with gasification of coal in China, and perhaps biomass elsewhere,’ he says. ‘If dimensioned properly, this has the potential to reduce the carbon footprint in the future.’