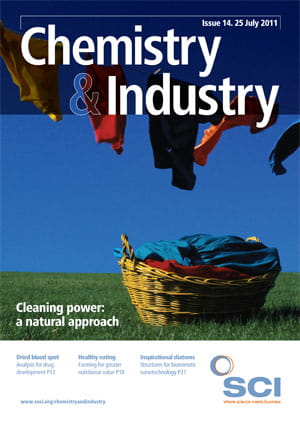 Diatoms are a relatively recent and amazingly successful group of single cell algae. In the short time, geographically speaking, of 185m years, they have taken a 20% share of global CO2 fixation, making them equally important as the world’s remaining rain forests. Since they tend to sediment as soon as they die after a bloom, diatoms are also very important for carbon sequestration.

Unlike other biominerals, their cell wall is made of silica rather than of calcium minerals, making them unique. They live in a microscopically small glass box – a frustule – which is roughly 10μm in diameter with a slightly larger lid overlapping the sides, similar to a small petri dish.

While offering protection for the cell, the frustule can make reproduction complicated. In asexual reproduction, each side of the shell becomes the lid of a new diatom, which means that one of the daughter cells will have a marginally smaller case than the original one. Many diatom species bypass this problem by occasional sexual reproductions. In this case, diatoms build their new frustule from scratch, but run the risk of being without protection for a while.

In some species, the glass shell is round and symmetrical, like a petri dish, while others have evolved more complex shapes. Each species also has a characteristic surface structure – patterns of small pores measuring tens to hundreds of nanometres, which allow the cells to take up nutrients. When the frustule is cleaned of the cellular material, the pores give the silica shell a delicate lace-like appearance. These patterns are also species-specific, so they must be genetically encoded. The genes probably act via specific proteins that catalyse and regulate the production of these intricate morphologies. However, the quest to find these proteins has met major challenges.

Even drastic protein isolation methods, for example, boiling the biological material with the shells. Nils Kröger, then working in the group of Manfred Sumper at the University of Regensburg, Germany, made a breakthrough in the late-1990s after dissolving the glass shell of the diatom Cylindrotheca fusiformis in water-free hydrogen fluoride. This brutal procedure, hitherto unheard of in protein biochemistry, released a new group of proteins, which the researchers called silaffins because they had an affinity to silicon compounds, including silicic acid.

Each of the three silaffins identified in the first experiments precipitated silica globules, ca 1μm in diameter, from a solution of silicic acid. However, the subsequent characterisation of the silaffins was difficult. Peptide sequencing failed, owing to the presence of unusual chemical modifications to amino acid side chains. Eventually, however, the researchers managed to find a longer gene, which encoded a precursor protein, from which the silaffins were derived. Synthesising the predicted sequence of the precursor protein and comparing its properties with the silaffins, Kröger and colleagues clarified the nature and function of the highly unusual modifications found in silaffins.

The researchers found that the amino acid lysine was most heavily modified, bearing polyamine functions in some cases, methyl groups in others. ‘When we finally succeeded in establishing a more gentle way of liberating the silaffins, using aqueous hydrofluoric acid of the strength used in etching glassware, we also found that all amino acids with hydroxyl groups were modified with phosphate groups,’ Kröger remembers. Comparing the modified proteins with the unmodified ones derived directly from the gene sequence, the researchers found that the unmodified version precipitated silica at neutral pH, but not in the slightly acidic milieu of the diatom cell.1

Further research revealed that silaffins are present in most diatom species investigated, but that their amino acid sequences varied considerably. What remains well-conserved, however, is the nature and arrangement of the amine and phosphate modifications. This suggests that the polypeptide chain mainly acts as a scaffold for these groups, and that they are the active ingredients. This insight led to the discovery of protein-free polyamine molecules in diatom shells, which appear to have similar activities as the silaffins and are typically present in similar amounts.2

A mixture of phosphate and polyamines can precipitate silica globules in vitro, much like the silaffins do. However, this activity still doesn’t account for the genetically determined lace-like patterns in the diatom shell. The sequencing of two diatom genomes, Thalassiosira pseudonana and Phaeodactylum tricornutum, has led to some interesting candidate genes, but hasn’t improved our understanding of the morphogenesis yet.3

Earlier this year, Kröger’s group at the Georgia Institute of Technology in Atlanta, US, presented a new group of proteins that offers a glimpse at how these pore patterns may be formed. The so called cingulins are similar to silaffins but specific to the girdle band of the diatoms, the cingulum. In the cingulum of Thalassiosira pseudonana, these proteins form microscopically small rings, which appear to be acting as scaffolds for the construction of the silica structures.4

This, says Kröger, ‘is the first demonstration that organic matrices can directly act as a scaffold for the morphogenesis of silica nano and microstructures, something which we had only speculated about so far.’ Looking at other diatom species, the researchers found similar scaffolds in all examples they checked. For the first time they are now able to use biochemical modification of the cingulin proteins to find out what it does to the resulting silica structures.

However, there may be additional levels of complexity that remain to be unravelled. Steve Mann from the University of Bristol, UK, comments: ‘Pattern formation […] often involves the secretion and directional growth of vesicles that act as microscale reaction flasks for the silicification processes. Understanding how the vesicles are regulated in time and space is in my opinion where the great breakthrough will happen.’

This would chime with the observation that silica shells are a relatively recent invention of evolution, while biomineralisation and patterning per se are much older. ‘I would speculate that the morphogenetic pathways were in place as cellular patterning processes prior to the emergence of biosilification, and were only later adopted as a means of controlling the spatial aspects of biomineralisation,’ Mann concludes.

Although scientists cannot currently copy the diatom’s ability to create intricate mineral patterns at ambient temperature, from aqueous solution at near-neutral pH, there is always the option to steal its products and use them as starting materials. Using natural structures as scaffolds for artificial ones is known as biotemplating. Chad Mirkin’s group at Northwestern University in Evanston, Illinois, US, applied this approach to diatoms in 2004. The researchers removed all organic materials from the silica shell and then modified the silica with silane reagents, coupled DNA oligonucleotides to the reactive centres introduced, and then attached gold nanoparticles to these.5

Initially, their aim was to use such structures to make sensors based on surface-enhanced Raman scattering (SERS), but so far with no success. In later versions, Mirkin’s group used vapourdeposition to coat diatom shells with gold, which indeed proved suitable for SERS sensors.6

Kröger’s colleague Kenneth Sandhage, who also works at the Georgia Institute of Technology, has since developed synthetic methods that keep the silica structure intact but replace the chemical groups entirely. Initially, in 2002, Sandhage’s group reacted a silica diatom microshell with magnesium gas, transforming the microshell into a nanocrystalline magnesia (MgO)-based replica that retained the three-dimensional shape and fine (submicron) features of the starting microshell.

Gregory Rorrer and his group at Oregon State University in Corvallis, US, have used diatom shells to develop biosensors. In these sensors the photoluminescence of the silica is enhanced when bound to electron-rich molecular ligands, such as antibodies. Thus, diatom-based sensors can convert the antibody–antigen recognition process into an optical signal.8 In their most recent work, Rorrer and colleagues have demonstrated that they can enhance photoluminescence even more strongly by doping the diatoms with traces of germanium.9

The group prepared pure diatom of silica by oxidising the organic material with hydrogen peroxide, which also separates the valves – the flat tops and bottoms of the shells – from the girdle bands. From cylindrical shells of the diatom Cyclotella, the researchers obtained round silica disks, 10μm in diameter, with well-defined pore patterns, which could be connected to optical devices via fibre optics.

‘We were the first group to harness the intrinsic optoelectronic properties of diatom frustules to detect a biomolecule by enhanced photoluminescence,’ says lead author Debra Gale. ‘Currently there is no conventional fabrication method to synthesise a type of material which has the same unique structural features and optoelectronic properties as diatoms. Diatom biosilica is a promising alternative material platform for device applications and it can be produced on a massively parallel scale using environmentally benign fabrication methods.’

Rorrer’s group has engineered diatoms for application in three diatom-based device platforms: antibody-coated for immunocomplex biosensors, germanium-doped for electroluminescent displays, and titanium-doped for dye-sensitised solar cells. Applications of these diatom devices may still face challenges though. For instance, one expert warned that non-specific adsorption of biomolecules is likely to make the application of such biosensors difficult in medical specimens such as blood samples. In this case, extensive sample preparation might rule out point-of-care use, which is a key target for new medical sensors.

The growing interest in the nanostructures of the diatom shell has so far led to successful biotemplating as well as a number of processes that can precipitate silica globules. As it turns out, a wide variety of organic molecules can catalyse this process, provided they have amine groups and phosphate groups in the right concentrations. In addition, many of them can also precipitate TiO2 from soluble titanium IV complexes.10

owever, biomimetic synthesis of comparable nanoscale patterns hasn’t quite happened yet. Even though researchers can produce porous aggregates using silaffins or coat molecular scaffolds with biomimetic materials, their control is still a long way away from what diatoms can achieve. Thus, before these initial insights can become useful in a new, biologically inspired nanotechnology, more fundamental research into the secrets of the diatoms’ glass houses is needed.