Walking in the nanoworld 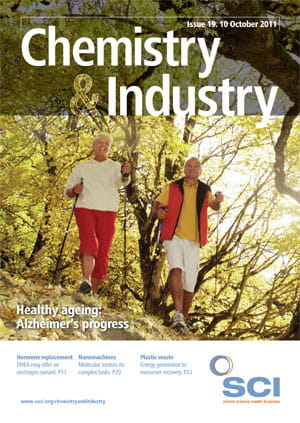 Nearly two decades ago, technical breakthroughs in the use of laser technology to trap and manipulate molecules attached to beads – laser tweezers – made it possible to study the molecular motors of the cell in unprecedented detail. Scientists scrutinised the nanoscale activities of motor proteins, including the myosin that powers our muscles and kinesin that transports components around within the cell.

Within a few years, the elementary mechanical properties, such as the distance covered with each stroke of a motor, the time needed, and the force transmitted were reported at a single molecule level. At around the same time, crystal structures of the relevant proteins enabled scientists to pin down molecular interactions and to complete the picture.

But was it really the correct picture? Also around the same time, in the early 1990s, some physicists began to doubt whether a molecular motor follows the same principles in the nanoworld as a macroscopic machine would in the visible world. Proteins are, in principle, capable of working like a large machine made of steel pistons, gears and levers, but considering the relentless battering that they receive from the Brownian motion of all molecules around them, they would face similar difficulties as a person trying to walk around in a room filled with basketballs flying in all directions.

Gravity would be practically non-existent, so they would have to glue themselves to the track to be able to transmit any force.

What physicists like Dean Astumian, now at the University of Maine, US, suggested instead was that molecular machines might find it easier to use Brownian motion than to fight it. Rather than using energy to struggle forward through a hailstorm of basketballs, they suggested that molecular motors use it to exclude the forces going in the wrong direction, leaving a net Brownian push in the desired direction.

Surprisingly, it is possible to use Brownian motion for unidirectional locomotion without violating the laws of thermodynamics. To stay in our macro-scale analogy, imagine skiing on a rough, saw-toothed surface, while being battered continuously by basketballs. They would push you this way and that, but you would stay in the same place in the long term because the impacts would cancel out statistically.

However, if the ground had an asymmetric saw-tooth profile – sloping much more steeply towards your front than towards your back – and you could push a button to grip the ground with a matching profile from your skis at any time, and release it as you see fit, you would actually move forward. This is because, measured from the trough in which you are sitting when the gripping claws of your ski are engaged, the nearest peak in forward direction is much closer than the nearest in the backward direction. So if you disengage the grip and re-engage randomly, you are more likely to have randomly moved one step forward than one step backwards.

This is how scientists now believe most biological motors work – by a ‘Brownian ratchet’ mechanism. The energy that is put in – typically as ATP – does not generate the forward moving force. Instead it is used to engage and disengage an asymmetric energy profile that adds a bias to the random Brownian motion and thus selects the movement going in the desired direction while discarding the rest.

For the classical ‘walking molecule’ kinesin, which gives the impression of walking along its microtubule track, researchers have replaced one of the firm legs with a flabby, unstructured chain of amino acids, leaving only the track-binding domain intact. They could show that this wobbly version of kinesin walks practically as fast as the natural one, which supports the prediction of the Brownian ratchet model that the ‘legs’, unlike ours, do not transmit power to drive the protein forwards. More recently, the same has also been shown for the muscle protein myosin.1

This understanding of how natural walking molecules harness the chaos of the Brownian motion has shaped the way nanotechnologists are now advancing in their attempts to design nanomachines that can walk around and transport objects. As molecular interactions and patterns are the key to the motor function, researchers have started by using established methods of DNA nanotechnology to build artificial molecular ‘walkers’.

In 2004, the group of Nadrian Seeman at New York University, US, reported the first walking DNA constructs. The researchers used base-pairing for all the relevant interactions. An anchor strand connects the foot of the walker molecule with the footholds on the track by forming double helices with both. Crucially, the anchor strand has a loose end where it can hybridise with a third DNA molecule. This third strand, the fuel strand, dissolves the attachment to the foothold by forming a more stable DNA duplex with the anchor strand. This duplex is washed away as the waste of the reaction.

At around the same time, the group of Friedrich Simmel at the Technical University of Munich, Germany, demonstrated DNA ‘hands’ that can be instructed to grip or release nanoscale objects. With hands and feet in place, the complete DNA robot wouldn’t be far off.

In 2010, Seeman’s group presented a programmable DNA assembly line with DNA walkers that can accept cargoes along on their trip.2 The researchers built a two-dimensional track using the DNA origami technique introduced by CalTech’s Paul Rothemund in 2006, from a total of more than 200 DNA oligonucleotides, offering 18 footholds. On this, they installed three 2-state DNA machines that can be programmed to donate – or not – different configurations of gold nanoparticle cargos, leading to eight experimentally distinguishable outcomes.

They moved a triangular DNA walker with four legs and three arms past these stations. ‘This walker is analogous to the chassis of a car moving along an automobile assembly line,’ Seeman explains. They could show that the walker could pick up cargo from the stationary DNA machines as instructed. As in the earlier work from Seeman’s lab, the movements and transfers are managed by competitive double-helix formation of DNA strands. Recently, Seeman says, ‘we have shown how to combine origami units, so future work includes increasing the size of the system by increasing the number of components and cargoes involved, and hopefully developing the system to combine smaller units, so that we can control finer details of structure. Recycling is also a goal – right now it’s like we built a whole plant to make a single car.’

In a paper that appeared simultaneously, Kyle Lund and colleagues show how a three-legged DNA ‘spider’ can precisely follow the path designed for it on a DNA origami surface.3 Unlike Seeman’s DNA robots, which have to be enticed to perform each step by addition of suitably complementary DNA strands, this project involves an autonomous walker, which only uses the information included in the track. The researchers could show that the robot could respond to elementary instructions including start, follow, turn, and stop which were programmed into the fabric of the track.

The DNA spiders consist of a steptavidin molecule as the body and three DNA legs that have the catalytic ability to cleave the DNA strands that they bind to. As the cleaved footholds bind the DNA legs less favourably than the uncleaved ones, the forward direction of the spider is dictated by a chemical gradient that the robot creates by its own catalytic activity. One could also say that it burns the bridges it has passed, hence von Delius and Leigh have called this the ‘burnt bridges approach’ to directionality in a recent review.4

According to Simmel, ‘In the future, DNA walkers on origami tracks might be supplemented with other nanocomponents and integrated with simple molecular logic elements. This will result in molecular robotic systems that can be programmed to react to their environment in a variety of alternative ways, or to carry out assembly tasks in a content-dependent manner.’

While DNA walkers are still curiosity-driven, practical applications of DNA nanotechnology are already emerging in the field of sensors. An improved control of movement relative to a DNA track could also help the development of third generation genome sequencing, because one could reverse the roles, immobilise the motor, and use it to thread DNA through a nanopore for readout of the bases.

Building robots from DNA has many practical advantages, most derived from the fact that molecular biology has developed so many tools to manipulate, analyse, and make DNA. However, the resulting molecular motors are typically as big and as complex as nature’s own motor proteins, such as kinesin. The challenge for organic chemists is to recreate in small molecules the principles that have been demonstrated in natural nanomachines and in artificial ones made from DNA.

Although many researchers have demonstrated some kind of movement between two molecules, it was only in 2010 that chemists succeeded in matching the characteristics of the natural walker kinesin – a directional, repetitive movement on the same track – and progressive molecular movement, which starts each new cycle without undoing the progress of the last one.

David Leigh’s group at the University of Edinburgh developed a small molecule system with two legs attaching to the molecular track by different covalent bonds, namely a disulfide bond and a hydrazone unit. In acidic conditions, the disulfide foot remains in place, but the hydrazone can detach and rebind to a different foothold. At high pH, the hydrazone foot becomes immobilised, while the disulfide foot can step out. However, the small molecule walker still lacks direction. It steps out randomly one way or the other, and a population of such molecules will eventually settle on the same thermodynamic equilibrium distribution regardless of the starting point.

The researchers managed to coax the walker away from the equilibrium by replacing the base step for the disulfide rearrangement with an irreversible sequence of disulfide reduction followed by oxidation. They placed the reaction under kinetic control so that it favours the product that is more quickly formed over the one that is more stable.

The same principle would also provide directionality on a longer track, for example a polymer of the units used in this research, as the walker would on average make more steps in the forward direction. ‘It's a bit like a drunk staggering home: take two steps forward, one step back, but still it proceeds with net directionality from A to B,’ Leigh says. In subsequent work, Leigh’s group modified the original acid–base system by introducing an additional photochemical step that expands or contracts the track and thus strains the walker.6 By coordinating this change with the molecular footwork, the researchers can now force the walker to move in either direction.

According to Leigh, ‘Currently we are working on systems with other origins of directional bias, systems with more rigid and extended tracks, and walkers that can capture, transport and release molecular cargoes. The ultimate goal is to construct small-molecule walkers that can perform tasks by migrating autonomously and unidirectionally along polymeric, surface-bound tracks.’ That’s still a long way to walk for a small molecule.

Michael Gross is a freelance writer based in London, UK.