Worldwide, around 5% of the population suffer from industrial, military, or recreational noise-induced hearing loss (NIHL). However, academic scientists have already carried out animal studies showing how molecules can protect the inner ear from the irreversible effects of noise damage – which could help safeguard hearing in noisy environments, such as military or industrial settings.

The UK charity Action on Hearing Loss estimates that the market for drugs to prevent noise-induced hearing loss could be worth $2bn, set against the current $6bn US market and €3.8bn European market for hearing implants and devices. So how might these drugs actually work?

Noise induces hearing loss by stressing the inner-ear cells that convert sound waves into electrical signals that travel to the brain. These hair cells vibrate in response to sound and can be both mechanically and chemically destroyed by noise. The theory behind the latter is that metabolic stress triggers hair cell death.

Researchers have found that loud noises lead to outer hair cells and lateral wall cells in the ear producing free radicals, in this case active oxygen and nitrogen species. Free Ca2+ has also been found to increase in the ear’s outer hair cells, but its exact role has yet to be proven (See Molecular handshake overleaf). Meanwhile, studies using guinea pigs, chinchillas and mice have demonstrated that antioxidant precursors and antioxidant mimetics can combat these free radicals, reducing permanent threshold shift (PTS) – hearing level change that has become persistent and isn’t expected to improve.

Reactive oxygen species appearing after loud noise persist for seven to 10 days, continuing to do damage. This offers a treatment window immediately after noise exposure that has been validated in animal studies,1 and which is now being exploited in some clinical trials.

A 2005 review article2 found 28 different antioxidant compounds that had been tested to protect hearing on the basis of antioxidant effects, including glutathione, ebselen, resveratrol and ascorbic acid. N-acetylcysteine (NAC) is one of the most widely studied antioxidants,3 with research showing its efficacy before noise, after noise, or as in one randomised, double blind study in a noisy nightclub, no measurable effect at all. Yet a further trial did show that NAC offered protection – to a group of manufacturing employees with a relatively common mutation in which the GST mu 1 (GSTM1) and GST theta 1 (GSTT1) genes have a null allele variant so that the entire gene is absent. These genes encode the isoenzymes of the glutathione s-transferase (GST) system, and incidentally are linked to susceptibility to chemical carcinogens.4 Genetics and nutrition, then, could both contribute to our ear’s relative ability to stand up to noise.

Another important element on the noise-protection battlefield is magnesium. A placebo-controlled study of 300 military trainees showed that only 11% of those on a magnesium aspartate supplement experienced PTS in both left and right ears. Meanwhile, recruits on the placebo suffered 22% (left ear) and 29% (right ear) PTS, and overall were around 10 times more likely to come away from training with some hearing loss than those taking Mg2+.

Those with a higher baseline magnesium level in their blood had more natural protection from hearing loss, while other work points to vitamin B12 as another nutrient that may help reduce sensitivity to noise.

Experts are not necessarily deterred by individual compounds’ apparent clinical failures. Some experts, including Colleen Le Prell at the University of Florida, US, expect that a cocktail of antioxidants will offer a better chance of protecting ear cells from noise.

Many experts in the field, including Jochen Schacht, director of the University of Michigan’s Kresge Hearing Research Institute in Ann Arbor, US, suggest that medicines to prevent, but not cure, hearing loss could be available in the next five to 10 years.5 ‘All the drugs that have been successful in animals – antioxidants are just one example – are candidates that deserve more scrutiny and then perhaps exploratory trials,’ he believes. However, no treatments that have worked so far in animal trials provided a ‘silver bullet,’ he says. ‘We may have to settle for drugs that provide some relief, but not necessarily complete protection,’ he suggests.

South Illinois University is currently leading the field with its launch in October 2012 of a late-stage trial with the US military of a drug to increase protection for people like soldiers exposed to very noisy environments. This treatment is based on D-methionine, which occurs naturally at low levels in cheese and yoghurt. Other front runners are ebselen, a man-made compound that mimics the action of an enzyme in the body that naturally recharges glutathione, and a dietary supplement that includes a combination of vitamin A-precursor beta carotene, vitamin C, vitamin E, and magnesium (see Table below). 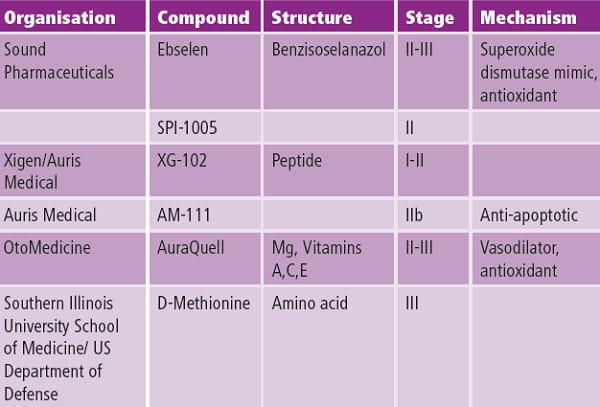 Animal studies suggest these agents reduce or prevent NIHL, but clinical trial data is still needed to determine their safety and efficacy in humans. Treatments based on D-methionine, ebselen and NAC all boost the natural antioxidant glutathione, which is thought to battle chemical stress in the ear’s hair cells.

A recently-completed clinical trial on a drug to rescue hearing at the eleventh hour has shown promising results. In November 2012, Swiss company Auris Medical announced that it had completed a Phase 2b study involving 210 patients who came in for treatment for acoustic trauma or sudden deafness across Europe. The trial drug, dubbed AM-111, inhibits the c-Jun N-terminal kinase enzyme, which is involved in apoptosis in the inner ear. Patients in the trial received the drug (or a placebo) within 48 hours of hearing loss via an injection through the eardrum. The aim is to stop hearing loss in its tracks, before the damage becomes permanent.

The trial’s coordinating investigator, Markus Suckfüll, said that the ‘clear and clinically meaningful improvements observed with AM-111 in the treatment of severe to profound hearing loss demonstrate that effective otoprotection is feasible, and they appear very promising’. He added that the placebo arm of the trial gave the results added credibility to control for patients who spontaneously recover their hearing, and would ‘provide a wealth of important new information for future hearing research’. The company’s next step will be to publish detailed outcomes of the trial in scientific journal articles, and to discuss taking clinical development further with regulators. Xigen has also partnered with Auris medical to explore whether its XG-102 stroke and myocardial infarction drug also has potential in the hearing loss arena.

Seattle-based Sound Pharmaceutical (SPI) is focusing on an orally-delivered small molecule (SPI-1005) based on ebselen that is currently in mid-stage clinical trials at the University of Florida for the NIHL, chemotherapy induced ototoxicity – hearing loss caused by drugs – and tinnitus. SPI found that right after loud noise exposure, the enzyme glutathione peroxidase 1 (GPx1) is diminished in several critical cells and tissues in the cochlea. SPI-1005 increases GPx1 expression and, the company suggests may allow affected cells and tissues to repair themselves.

The latest Phase 2 study on SPI-1005 has just kicked off, using temporary threshold shift (TTS) in volunteers listening to music on headphones as an indicator for the drug’s efficacy. ‘The goal is to determine if SPI-1005 can prevent or reduce the TTS induced by listening to loud music,’ says LePrell, who is lead investigator.

Le Prell has also been jointly funded by the US National Institute on Deafness and other Communication Disorders and by OtoMedicine to carry out further animal studies into vitamins ACE plus Mg dietary supplements as a preventative treatment. The focus has been on maintaining efficacy when the supplements are given orally, rather than via injection.

Where hearing loss is concerned, NIHL may represent relatively low-hanging fruit, suggests Ralph Holme, head of Biomedical Research at Action on Hearing Loss: ‘Potentially it could be easier to recruit patients for clinical trials for NIHL, especially given the active interest in this type of treatment from the UK and US military.’ But as with other types of hearing loss, he cautions, ‘there is still work needed to understand the mechanisms of NIHL before effective treatments can be developed’.

It remains to be seen whether the current pipelines will yield viable drugs. However, these trials certainly won’t be the last we hear about chemical pathways involved in deafness. ‘It’s an area of intense research,’ says Schacht, ‘New ideas may emerge at any time.’

A recent report in Nature6 highlighted work by a Harvard University team to map the precise 3D atomic structure of thin protein filaments critical to ear cells. They also worked out what it would take to pull these linked proteins apart – gaining an understanding of how a loud noise could cause deafness.

The researchers homed in on the ‘tip links’ of hair cells in the inner ear. Strings of proteins physically connect the cilia or ‘hairs’ found in these cells, and it is tension in these tip links that sets off a process that ultimately sends a signal to the brain. The tip links are formed from proteins called cadherins, mutations of which can cause congenital deafness and balance problems. The group hypothesised that the connections between the cadherins would be the first to break under stress. Lead author Marcos Sotomayor explains that this hypothesis was based on previous molecular dynamics simulations.

Sotomayor synthesised and purified large amounts of the ends of the proteins, where they connect, then bound them together. Targeting the bond with powerful X-rays, courtesy of the Argonne National Laboratory, allowed him to couple X-ray diffraction results with biochemical data. The result was a 3D map of the bonded region, pinpointing each individual atom.

The research revealed the two cadherins – protocadherin-15 and cadherin-23 –bonded like two hands gripping each other at the wrist. One surprise was that the handshake was not mediated by calcium ions, but instead by a unique extended interface between the cadherins that had not been seen before in other cadherin bonds.

‘Cadherins are found in many organs and tissues around the body, and are usually involved in calcium-dependent cell-cell adhesion, ie they act as a ‘glue’ that keeps tissues together,’ says Sotomayor. ‘Cadherin-23 is not found in many other tissues, but protocadherin-15 is found in the brain, kidney, lungs and pancreas.’ Sotomayor says we don’t know a great deal about what these two proteins do in other tissues, but their absence in humans is associated with blindness and deafness (Usher syndrome).

Sotomayor’s work opens the door to research drugs or molecules that may increase the bond between these cadherins, strengthening the tip links and helping them to withstand forces from loud noise. ‘Our research may trigger the search for or the rational design of drugs that counteract the effect of deafness mutations within the crystallised complex,’ Sotomayor concludes. ‘We studied four of those mutations, revealing some of the mechanisms at play: the first steps towards drug design.’

Helen Carmichael is a freelance science writer based in Dorset, UK.