We use cookies to ensure that our site works correctly and provides you with the best experience. If you continue using our site without changing your browser settings, we'll assume that you agree to our use of cookies. Find out more about the cookies we use and how to manage them by reading our cookies policy.
Hide
Sustainability & Environment
■ ■ ■ ■
19 July 2022

This year, four students produced outstanding essays in which they describe their research projects and the need for them. In the first of this year’s winning essays, Angus McLuskie outlines his work in improving the production of urea derivatives and polyureas.

Would you risk your life for plastics and agrochemicals? You might not have to…

Urea derivatives hold a substantial global market, which is dominated by their use as fertilisers in the agrochemical sector, in addition to smaller-scale technical applications as glues, resin precursors, dyes and pharmaceutical drugs. Furthermore, polyureas are important protective coatings, with a global market exceeding £800 million a year.

Currently, urea derivatives and polyureas are produced on an industrial scale using highly toxic chemicals such as phosgene, (di)isocyanates and carbon monoxide. These reagents are detrimental to human health, as evidenced by the release of methyl isocyanate gas from the Bhopal Union Carbide factory in 1984, which led to thousands of deaths and a global outcry.

Phosgene was itself used as a battlefield chemical weapon in World War I, and is sourced from fossil-fuel-derived carbon monoxide. The result is a process with significant health and environmental impacts.

As part of a global drive to tackle climate change and move towards a circular economy, the objective of our research is to replace non-renewable and toxic feedstocks with novel sustainable catalytic processes to produce useful chemicals and materials.

In pursuit of greener methods, we have recently discovered synthetic methodologies, using a catalyst of manganese, to couple dehydrogenatively (1) methanol and (di)amines and (2) formamides and amines to make symmetrical (poly)ureas and unsymmetrical urea derivatives respectively (ACS Catal., DOI:10.1021/acscatal.2c00850). 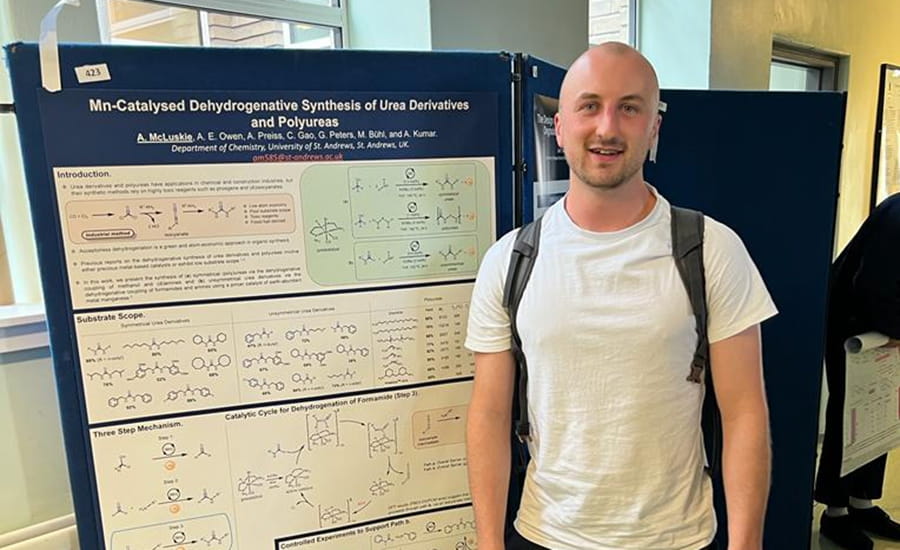 Angus with his poster on Mn-Catalysed Dehydrogenative Synthesis of Urea Derivatives and Polyureas.

The only process byproduct, molecular hydrogen, is valuable in itself, and the non-toxic reagents of methanol or formamide can be sourced from renewable feedstocks. For example, Carbon Recycling International, an Iceland-based company, has developed methods to generate methanol industrially through the direct hydrogenation of CO2 (ATZextra Worldw., DOI:10.1007/S40111-015-0517-0). Formamides can be made from formic acid, which may be produced from biomass or CO2.

The synthesis of urea derivatives using this approach has been reported previously using iron and ruthenium catalysts, but these present individual limitations. Iron catalysts result in poor yields and substrate scope, while ruthenium catalysts are expensive and raise sustainability concerns due to ruthenium’s low abundance in Earth’s crust (Chem. Sci. J., doi.org/10.1039/C8SC00775F and Org. Lett., doi.org/10.1021/acs.orglett.5b03328).

The synthesis of polyureas via this approach has only been achieved before using a ruthenium catalyst. With a manganese-based pincer catalyst, we succeeded in making a broad variety of symmetrical and unsymmetrical urea derivatives as well as polyureas at high yields and under a low catalytic loading of 0.5-1 mol%. As the third most abundant transition metal in Earth’s crust, manganese is much cheaper than ruthenium, which improves the economic viability of the process for industrial applications.

This is the first example of the synthesis of polyureas from diamines and methanol using a catalyst of an Earth-abundant metal. We have demonstrated for the first time the synthesis of a potentially 100% renewable polyurea from methanol and a renewable diamine Priamine, which is commercialised by Croda. This could be of interest to emerging businesses for making bio/renewable plastics. 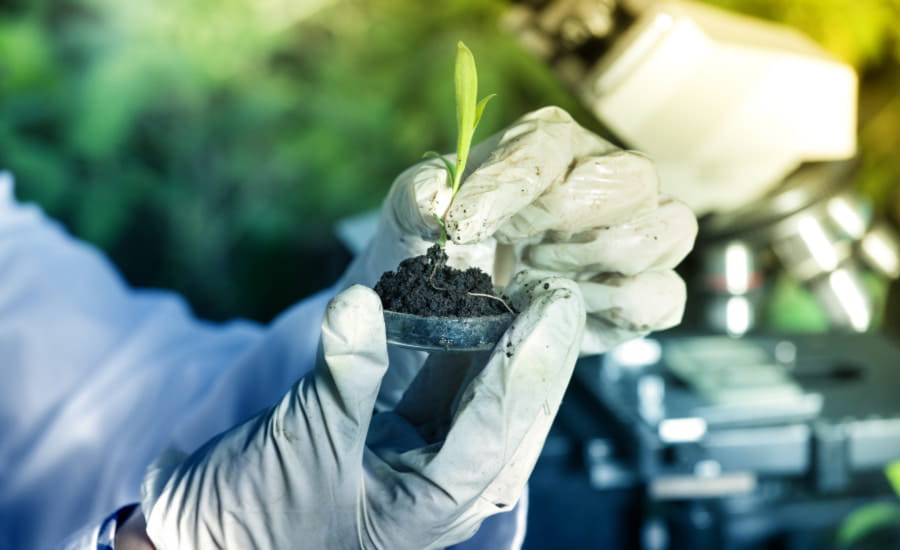 Angus hopes his research will help us develop urea-functionalised agrochemicals and pharmaceutical drugs in a more efficient, greener way.

This initial proof of concept is exciting, but there are challenges to overcome for commercialisation. Evidently, the cost is important, and since the catalyst is much more expensive than reactants, such as amines and methanol, the cost is directly linked to the catalyst’s activity; a homogeneous catalyst that is non-recyclable and offers a turnover number of 100-200 makes the process expensive.

We are now focusing our efforts on enhancing the efficiency of the catalyst to increase cost-effectiveness, which will also allow us to make commercially important urea-functionalised pharmaceutical drugs and agrochemicals with greater efficiency and reduced impact on the environment, human health, and economy.

Written by Angus McLuskie | Edited by Eoin Redahan You can find more of their work here.