We use cookies to ensure that our site works correctly and provides you with the best experience. If you continue using our site without changing your browser settings, we'll assume that you agree to our use of cookies. Find out more about the cookies we use and how to manage them by reading our cookies policy.
Hide
Science & Innovation
■ ■
25 July 2022

From sanitary pads to vaccines, how adversity accelerates innovation

From the Black Death to the Covid-19 pandemic, great adversity has also led to great advances. So, which inventions have emerged from times of hardship? Eoin Redahan finds out. 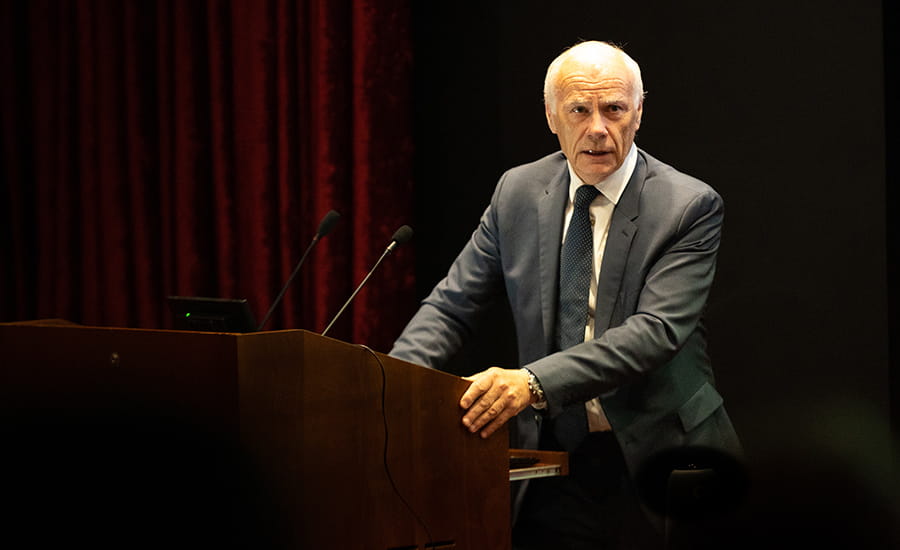 The pandemic taught us a lot about ourselves. It taught me that eating my body weight in sweets was a great way to destroy my teeth, and it brought home to many the futility of the five-day commute. On a more abstract level, it taught governments and policy makers just how much can be achieved in a short space of time when necessity demands it. The vaccines that swam around our veins bore testament to this.

The pandemic has shaped innovation. Nowhere is this more apparent than in medicine. It isn’t the first awful event to provide a hotbed for change, and it won’t be the last. ‘It is possible to accelerate innovation,’ Paul said. ‘We’ve demonstrated that.’

Black Death and the bird mask

As bad as the Covid-19 pandemic was, the Black Death makes it look very tame indeed. It is estimated that the Plague, which was its worst from 1346-53, took up to 200 million lives in Eurasia and North Africa.

Amid the carnage, it is also said to have given us a system to mitigate infectious diseases with which we are familiar, including isolation periods. According to Britannica, ‘public officials created a system of sanitary control to combat contagious diseases, using observation stations, isolation hospitals, and disinfection procedures.’ 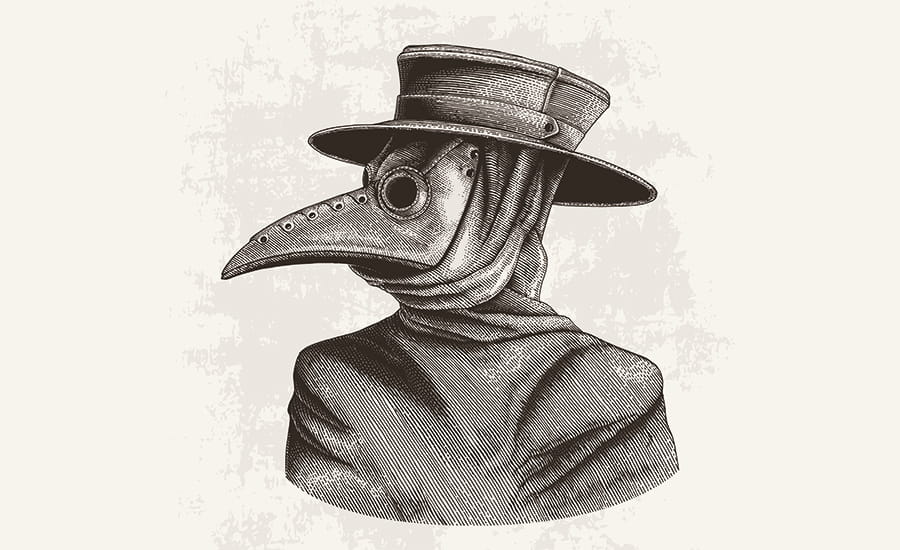 The terrifying doctor will see you now.

The Plague also said to have inspired greater experimentation in pharmacology. In a sense, it also helped democratise medicine, with medical textbooks shifting from Latin to the vernacular. As John Lienhard, at the University of Houston, noted: ‘Both medical and religious practice now shifted toward the laity.’

But perhaps the most memorable advance from this time was the strange, beak-like masks worn by some doctors during the Plague. These masks were a crude (and frankly terrifying) way to protect the doctors from the disease in the air. The doctors even filled these masks with herbs in an effort to protect against pathogens.

Byproducts of the war effort

Of course, wars have also led to military innovation at breakneck speed. During the American Civil War, the Minié ball was created. It spun faster than other bullets and could travel half a mile – unlike pre-Civil War bullets, which went a mere 300 feet. 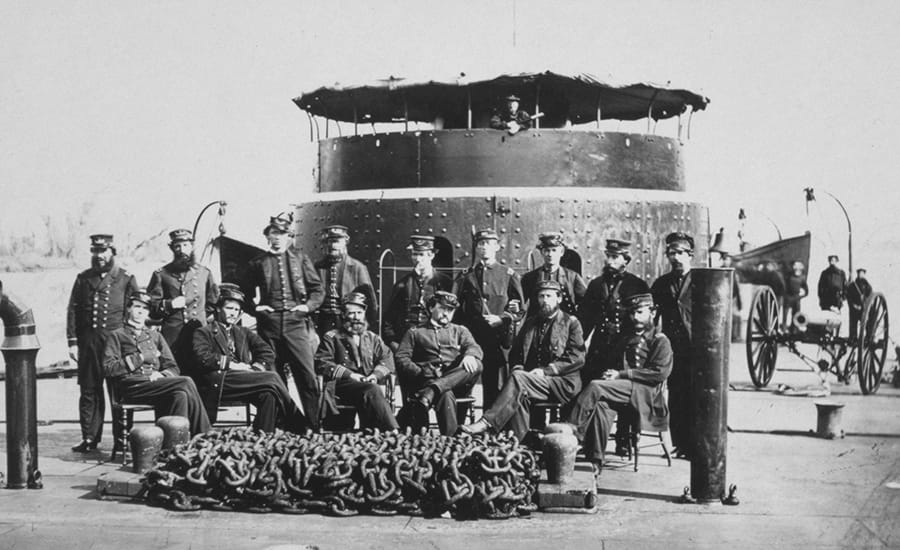 Officers of a monitor-class ironclad warship, photographed during the American Civil War.

This war also led to the ironclad warship, with plates riveted together to protect against cannonballs. However, it should also be noted that many of the most interesting war-borne inventions have ended up having little or nothing to do with military application. 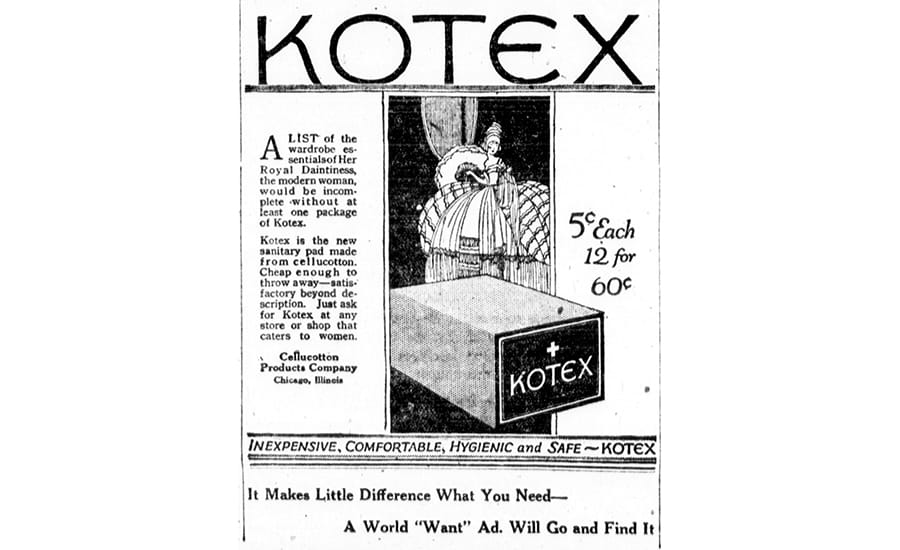 The ‘cotton-like-texture’ of cellucotton led to its brand name Kotex. According to this 1920 advertisement, this ‘wardrobe essential of Her Royal Daintiness’ was available at any shop that catered to women. Different times.

World War I gave us the blood bank, the Kleenex, the trench coat, and the sanitary pad. The sanitary pad has peculiar origins. In 1914, the war resulted in cotton shortages and substitutes were needed. Kimberly-Clark executives duly discovered a processed wood pulp material that was five times more absorbent than cotton, and cheaper to make. The material was used for bandages, and Red Cross nurses realised that this material could be used as makeshift sanitary pads. The company then developed a sanitary pad – branded Kotex – made from cellucotton and a fine gauze.

Material substitution also led to ground-breaking innovation in World War II. According to the National WWII Museum New Orleans, in 1942 Japan cut off the US supply of natural rubber. With the demand for rubber high, US President Franklin Roosevelt invested $700m to make synthetic rubber from petrochemical byproducts at 51 new plants. By 1944, these synthetic rubber plants were producing 800,000 tonnes of the material a year. 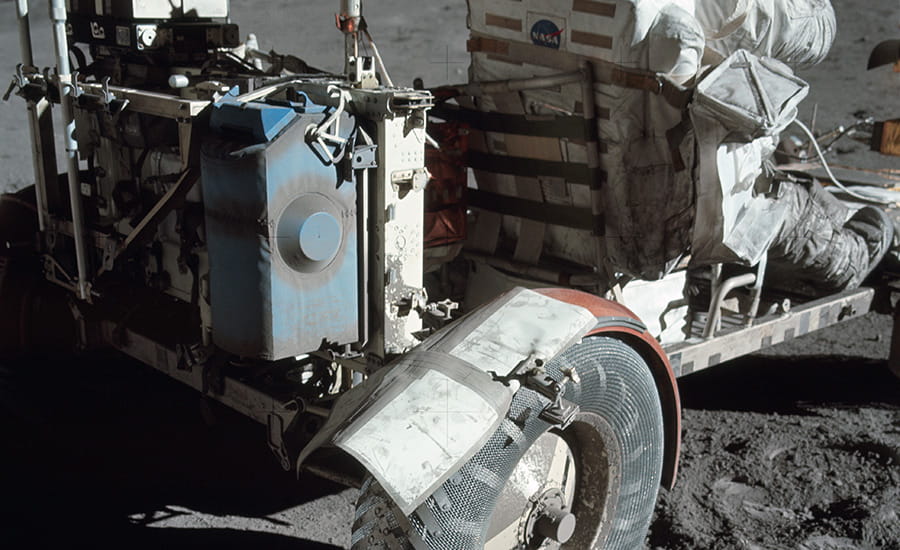 Duct tape was developed by Johnson & Johnson during the Second World War, and by 1972 the ubiquitous tape had reached the moon. This makeshift wheel fender repair helped the Apollo 17 mission’s lunar rover to keep lunar dust at bay.

We use many other products invented during the Second World War, including duct tape, which was developed by Johnson & Johnson to keep moisture out of ammunition cases. A fellow called Harry Coover discovered cyanoacrylates – the active ingredient in Super Glue – while he tried to create a clear plastic for gun sights.

And the next time you reheat your dinner, spare a thought for Percy Spencer, the US physicist who noticed the candy bar melting in his pocket when he stood next to an active radar set. This moment of epiphany led to an invention you might know: the humble microwave.

Just as these trying times lead to extraordinary leaps in technology, they also lead to the large-scale rollout of said discoveries. A prime example of this is penicillin. It was first used to treat an eye infection in 1930, but it was only with the horrific fall-out of war that experiments with deep tank fermentation led to its widespread production. 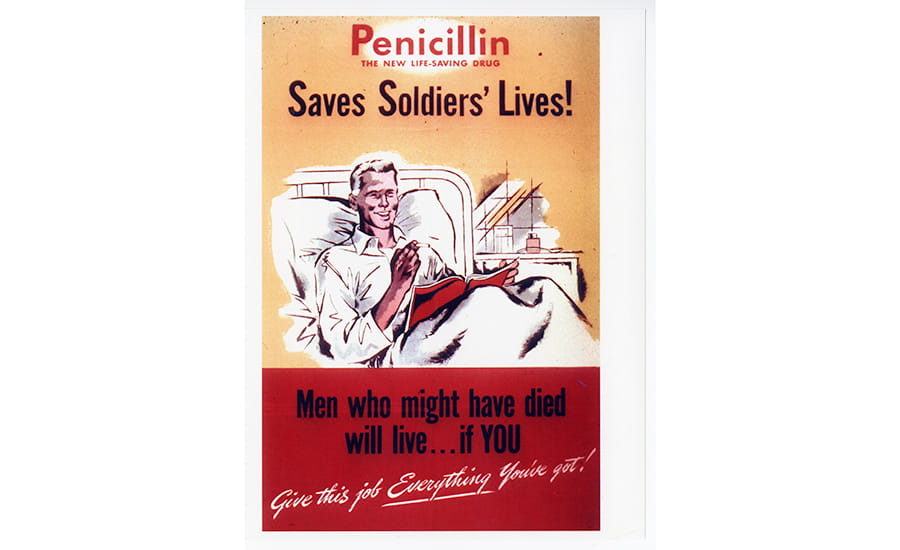 A soldier recuperates in hospital thanks to penicillin in this Second World War poster. Note the not-quite-so-life-saving hospital bed cigarette. Different times, again.

The Penicillin Production through Deep-tank Fermentation paper in ACS notes that: ‘During World War II, the governments of the United States and the UK approached the largest US chemical and pharmaceutical companies to enlist them in the race to mass produce penicillin […] One of these companies, Pfizer, succeeded in producing large quantities of penicillin using deep-tank fermentation.’ 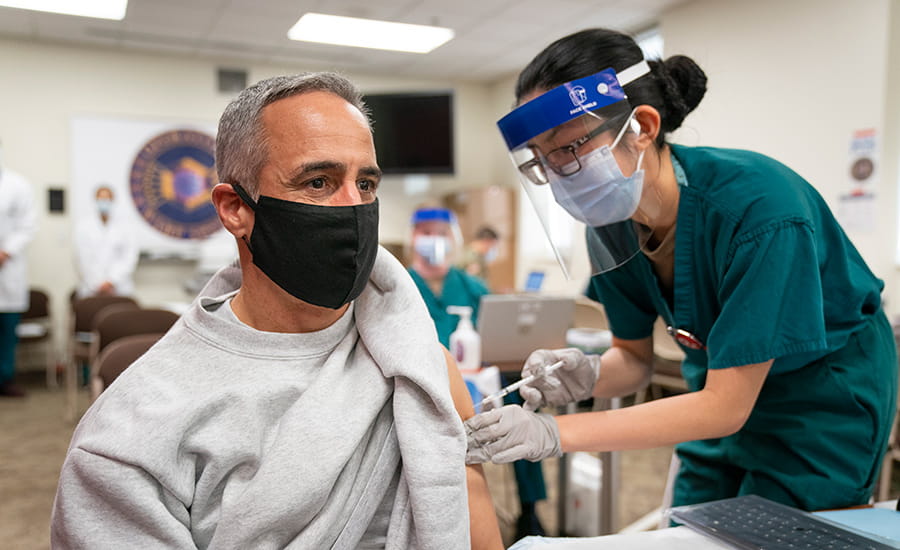 The speed of development and global-scale rollout of vaccines against Covid-19 was unprecedented. Science, business and governments worked together to get the world moving again.

And, as we all know, Pfizer was back at it again during the Covid-19 pandemic. Along with AstraZeneca, Moderna, and essentially the entire pharmaceutical industry, it created vaccines that saved countless lives. Governments and policymakers were also reminded just how quickly life-saving technologies can be pushed through when needed.

But the legacy of Covid-19 treatment will stretch further, be it in nanotechnology, artificial intelligence, or other fields – who knows what else will come from it?

As Paul Booth said: ‘It is possible to accelerate innovation. We’ve demonstrated that.’