Why are chillis spicy for humans, but not for birds?

What makes chilli peppers so spicy and how do they help with pain relief? The SCI Horticulture Group explained all ahead of their appearance at BBC Gardeners’ World Live in Birmingham from 16-19 June.

This June, the SCI Horticulture Group will tell the public all about the hidden chemistry behind their favourite fruit and vegetable plants. One of the main plants they will feature at the National Exhibition Centre is the humble chilli pepper – and these famous fruit-berries conceal more secrets than you might think…


Where does the chilli originate?

The chilli pepper (Capsicum spp.) is a member of the Solanaceae, the plant family that includes edibles such as potatoes, tomatoes, aubergines, but also poisonous plants such as tobacco, mandrake, and deadly nightshade.


Who brought the chilli pepper to these shores?

The chilli was brought to Europe in the 15th century by Christopher Columbus and his crew. They became acquainted with it on their travels in South and Central America and, shortly thereafter, to India via the Portuguese spice trade.


How varied is the genus?

From the five domesticated species, humans have bred more than 3,000 different cultivars with much variation in colour and taste. The chilli and bell peppers that we eat are the fruit – technically berries – that result from self-pollination of the flowers.

Today, chilli peppers are a global commodity. In 2019, 38 million tonnes of green chilli peppers were produced worldwide, with China producing half of the total. Spain is the largest commercial grower of chillies in Europe.

Capsaicin is the main substance in chilli peppers that provides the spicy heat. It binds to receptors that detect and regulate heat (as well as being involved in the transmission and modulation of pain), hence the burning sensation that it causes in the mouth.

In humans, these receptors are present in the gut as well as the mouth (in fact, throughout the peripheral and central nervous systems) – hence the after-effects of eating too much chilli. Capsaicin, however, is not equally distributed in all parts of pepper fruit. Its concentration is higher in the area surrounding the seeds.

>> Get tickets for Gardeners’ World Live 2022 and pop by our stand to say hello!


How do you measure chilli heat?

The Scoville Heat Unit Scale is used to classify the strength of chilli peppers. Scoville heat units (SHU) were named after American pharmacist Wilbur Scoville who devised a method for rating chilli heat in 1912. 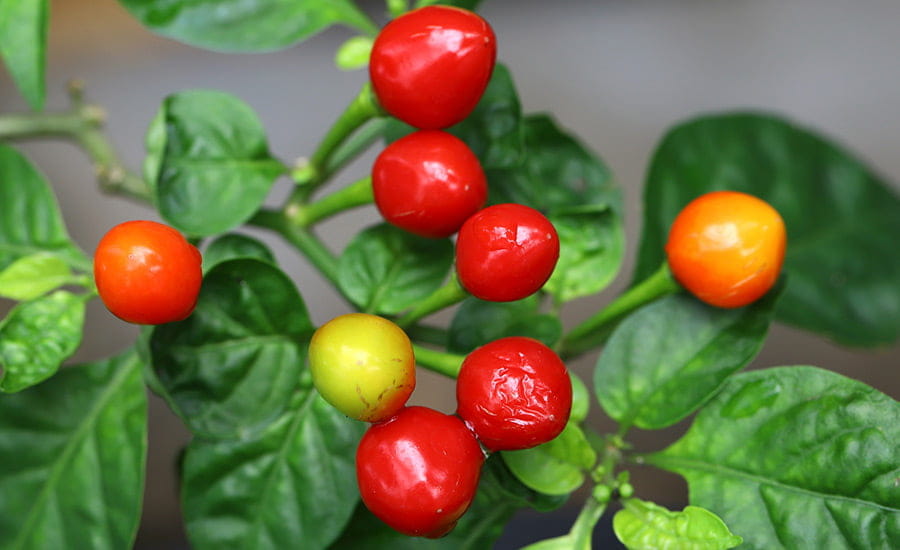 This method relied on a panel of tasters who diluted chilli extract with increasing amounts of sugar syrup until the heat became undetectable. The greater the dilution to render the sample’s heat undetectable, the higher the SHU rating. Pure capsaicin measures 16,000,000 SHU.

The capsaicin content of chilli peppers varies wildly, as is reflected in the SHUs of the peppers below:


Dispersal vs. protection – why do chillies contain capsaicin?

The seeds of chillies are dispersed in the wild by birds who do not have the same receptors as mammals and, therefore, are unaffected by capsaicin. Perhaps chillies have evolved to prevent mammals from dispersing their seeds?

Capsaicin has also been shown to protect the plant against fungal attack, thus helping the fruit to reach maturity and the seeds to be dispersed before succumbing to rot. This antifungal property can also be put to good use in helping to preserve foods for human consumption.


How did chilli help win a Nobel Prize?

Capsaicin was pivotal in the research that led to the award of the 2021 Nobel Prize in physiology and medicine to David Julius and Ardem Patapoutian for their discoveries of receptors for temperature and touch.

The two US-based scientists received the accolade for describing the mechanics of how humans perceive hot, cold, touch, and pressure through nerve impulses. The research explained at a molecular level how these stimuli are converted into nerve signals, but the starting point for the study was work with capsaicin from the humble chilli pepper.

Capsaicin is used as an analgesic (a pain reliever) in topical ointments, nasal sprays, and patches to relieve chronic and neuropathic pain. Clinical trials continue to investigate the potential of capsaicin for a wide range of additional pain indications and as both an anti-cancer and anti-infective agent.

>> Special thanks to Neal Price from Chillibobs, Martin Peacock of ZimmerPeacock, Hydroveg, and The University of Reading Soft Fruit Technology Group for supporting the work of the SCI Horticulture Committee at BBC Gardeners’ World Live.