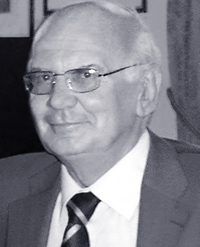 Derek Wallwork Heywood was born in Pendlebury on 11 January 1934, the only son of Wilfred and Florie Heywood, and died after a short illness on 10 November 2021, aged 87. His father sold fruit and vegetables at Smithfield Market in Manchester. He was educated at Christ Church School in Pendlebury, at Farnworth Grammar School (which he left in 1952), and at the University of Manchester Institute of Science and Technology. In 1957, he married Renee Caswell, who died in 2007 after nearly 50 years of marriage. They had two children, Sally and Nicola (who sadly passed away in 1997).

After leaving school, Derek started work at Allied Colloids Ltd, before being called up for National Service with the Royal Air Force. For almost 40 years (from the late 1950s to the late 1990s) he worked for BIP Ltd as a textile chemist, beginning his career in the company’s Manchester office before relocating to its Oldbury site, near Birmingham, where he became Technical Development Manager. His job involved a lot of travelling in a consultancy capacity.

Derek began his textile career in textile printing and moved into amino-finishing, which became a specialist area. He carried out development work in cross-linking applications for non-woven textiles and carpet backings. He also gained experience working with aqueous polyurethanes for textile finishes and coatings.

After leaving BIP Ltd, he became the Managing Director and Textile and Chemical Consultant of Sacola Associates (named after his two daughters), based at his home in Cheadle Hulme. Derek worked in textile mills across the world and was a consultant to a number of major chemical companies and garment manufacturers. He also edited Textile Finishing, which was published in 2003 by the Society of Dyers and Colourists (SDC), and contributed a chapter on Easy Care to Chemistry of the Textile Industry).

Derek joined the Society of Chemical Industry (SCI) in 1964 and was a busy member, serving on many of its committees. SCI records show that he was a member of the Canadian, International, Yorkshire and Humber, South Wales (also a member of its committee) and Manchester Sections. He chaired the committee of the Manchester Section (which he joined in 2000) from 2004 until 2006 and was instrumental in its merger with the Liverpool Section to form the Liverpool and NW Regional Interest Group (RIG) in 2006. He was a member of this RIG committee until he died and served as a member of the SCI’s Fire and Materials and Science and Enterprise Technical Interest Group committees.

As early as 1988, the SCI recognised Derek’s immense contribution by awarding him its Lampitt Medal ‘for outstanding service in a variety of aspects of the society’. All those who served with him enjoyed his company and humour. He was a caring and passionate supporter of the SCI, and we are deeply indebted to him for all his hard work on behalf of the Society and its members.

Derek joined the Society of Dyers and Colourists (SDC) in 2005 and, after becoming a Fellow and Chartered Colourist, he was awarded a Gold Medal for his ‘prolonged and distinguished services to the Society’ in 2019. He was a member of the SDC Finance Committee and served as Chair of the SDC Board.

He is remembered with fondness by the staff at the SDC HQ in Bradford. ‘He was very modest about his achievements and rarely spoke about them, but always relayed lots of funny stories from his travels round the world’, said one.

Derek played rugby for Manchester YMCA until his late thirties and was President of Stockport Lions. He was a member of the ‘31 Club’ – a group of 15 senior people from the textile industry, who each brought a guest to hear speakers at their regular dinners at the Stanneylands Hotel in Wilmslow.

Derek’s funeral was held at All Saints Church, Cheadle Hulme, on 9 December. He is survived by his daughter Sally Hindley and grandsons Josh and Sam Hindley.