The competition was open to masters students, PhD students and early post docs in the field of Agrisciences. Participants were asked to tweet a selfie with their research to @SCIAgrisciences. Six people entered.

The winner was Fran Pool, University of Reading. Details of Fran’s and the other five entrants’ research are provided below:

‘My research seeks to mathematically model cholesterol biosynthesis and lipoprotein metabolism in a human liver cell. Particular focus has been on the mevalonate pathway and the effects of fungicide ingredient, CYP51 inhibitor, on the pathway from a toxicological perspective. I chose to pursue a PhD at Reading University as I had really enjoyed my masters dissertation entitled 'Mathematical Modelling of Lipoprotein Metabolism'. The work really brought alive the uses of mathematics in every day situations, especially in human health. It also became apparent that there was a niche in the mathematical modelling of cholesterol regulation still to be explored. I gained the most enjoyment from creating models that replicated known behaviours and exploring new areas such as the effects of CYP51 inhibitors on the mevalonate pathway. This work can be used to provide insight into the toxicological properties of fungicides and extended to include the interaction of the mevalonate pathway with other pathways involved in cell development. The most challenging aspect of my PhD (and I hear many others) has been writing the thesis. However, the late nights agonising over sentence structure and flow of the work is rewarded by the sense of achievement upon submission. For me, the SCI event I attend in July was a welcome break from thesis writing made better by the interesting work presented by other researchers in a friendly and relaxed environment. The sheer scope of topics presented in that one day was truly impressive and the standard of research very high.’ 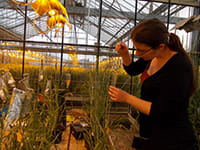 'Plants conserve water by producing a waterproof waxy coating and microscopic stomatal pores. Stomata open to allow CO2 uptake for photosynthesis, but close to prevent water loss in unfavourable conditions. Some studies have found links between the processes of wax production and stomatal development, and my research is delving deeper into plants with altered wax to see if we can pinpoint the cause of this relationship.’

'I am a first year PhD student at Natural Resources Institute, University of Greenwich. My research is focused on the Mediterranean (MED) cryptic species of whiteflies belonging to the Bemisia tabaci species complex. B. tabaci is a group of pest organisms causing considerable agricultural damage in tropical and subtropical regions worldwide. MED is one of the two whitefly species that are invasive and it also shows an alarming level of resistance to various insecticides. Recent evidence shows that members of the MED species, spanning from southern Europe to Sub-Saharan Africa, display more complex genetic structure than previously thought, together with significant biological differences between populations. These findings challenge the measure of species delimitation currently applied to B. tabaci complex. My goal is to study the level of gene flow between various MED populations and other related species and their preference for various host plants together with detoxifying mechanisms contributing to the differential host plant utilisation.’ 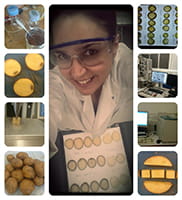 Cláudia Carvalho, University of Greenwich - working for a future with better crisps and chips

‘I am in the middle of my 2nd year and I am doing my PhD at the University of Greenwich in the Natural Resources Institute, with a scholarship from AHDB Potatoes (former Potato Council). My PhD is about Understanding mechanisms and identifying markers for the onset of senescent sweetening during potato tuber storage. Senescence sweetening is an important issue for the potato industry because storage potential of processing potatoes is often terminated prematurely by the unpredictable onset of senescent sweetening. The condition, characterised by a rise in reducing sugar content (fructose and glucose), results in darkening of chips and crisps, and heightened risk of acrylamide formation through the Maillard reaction. There is lack of information on biochemical mechanisms leading to senescent sweetening and there is an urgent need for better predictive methodologies for growers/processors. Using commercial varieties with contrasting propensity for senescence sweetening the aim of my project is to improve understanding of the mechanism(s) underpinning senescent sweetening and to develop predictive tools.’ 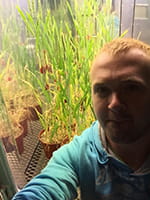 ‘My research is based around a Doubled Haploid population of wheat to identify possible traits that are tolerant to heat stress and using this data to improve crop model responses to heat stress. The project combines genotyping, a field phenotyping trial, controlled heat stress experiments and crop modelling to achieve this. The field phenotyping allows the population to be calibrated to the crop model as well as identifying allele effects on certain phenotypic traits. The heat stress trails aim to clarify susceptible growth timings, as well as allele effects on tolerance to heat stress. The crop model can then be used to identify where any potential tolerant traits can be beneficial in future European climates.’ 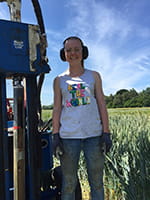 Christina Clarke, University of Reading - Taking soil cores in the field down to 80 cm to study rooting at depth in wheat

All the tweets can be seen on the SCI Agriecnes Twitter Feed at: @SCIAgrisciences