Innovation Day is designed to promote early career innovation. The event brings together early career scientists and industry leaders to consider solutions to meeting the most pressing needs of the public.

The Schlinger Symposium brings together promising young scientists and technology leaders from across the chemical industries with a focus on frontiers of chemical R&D.  Plenary and breakout sessions are oriented to areas where the chemical industry interfaces with other emerging  business sectors.  In combination with the award ceremonies, the Schlinger Symposium offers attendees the opportunity to learn about cutting-edge science and technology, exchange ideas with peer industrial researchers and entrepreneurs, and prepare to be innovation leaders. 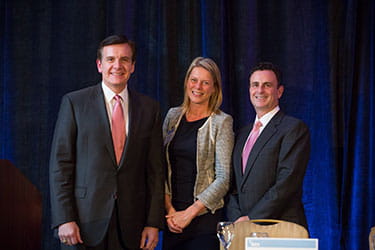 The 2015 event focused on the science of materials. Speakers, breakout session organisers and presenters for Innovation Day 2015 represented some of the most well know orgnisation and institutions in the USA, and included Cornell University, Dow Chemical Company, ExxonMobil Chemical,  Lyondell Chemical Company, R. Grace and Company and University of Pennsylvania, to name a few.

The SCI Gordon E. Moore Medal recognizes early-career success in innovation, as reflected both in market impact and improvement to quality of life. The 2015 award was presented to John A. McCauley of Merck Sharp & Dohme at a luncheon in his honour on Innovation Day 2015.

The Perkin Medal recognised as one of the highest honours given for outstanding work in applied chemistry in the United States. It commemorates the discovery of the first synthetic dye (the so-called Perkin mauve) by Sir William Henry Perkin in 1856. Following the Innovation Day events at CHF, SCI America awards the 2015 Perkin Medal to Cynthia A. Maryanoff, Foundation Distinguished Professor, Baruch S. Blumberg Institute.