This item first appeared in 2007

A total of 54 members and guests attended the traditional pre-Christmas evening meeting held on 6 December 2007.

Group Chairman, Colin Ruggles, opened proceedings by introducing Mrs Margaret Bessey and inviting her to make the first presentation of the George Bessey Award to John Buekett for his long and distinguished service as Committee Member, Honorary Treasurer and Chairman of the Group. Also present for the bestowing of the award were Sandy Gray (SCI Chairman), Andrew Ladds (SCI CEO), Diane Brown (Chair of the Awards Committee) and Monica Iglesias (Awards Coordinator). In his response John thanked the Group and Society and said that he had chosen as his prize a set of the multi-volume account The History of Technology.

Captain William Wells, Master Mariner and former Thames pilot then gave his talk on The History and Heritage of Maritime London. This covered the remarkable, contentious and continuous development of London as a port from Roman and Saxon times to the era of the Port of London Authority, Jack Dash and Trade Unions, Containerisation and leisure craft on the Upper Thames. Anecdotes included hair-raising tales of negotiating the Thames Barrier (set 7 degrees skew to the tidal current) and piloting cruise ships astern through Tower Bridge (because it is impossible to turn such large vessels for their return trip down river). The excellent PowerPoint slides were greatly admired and the talk generated a lively discussion. 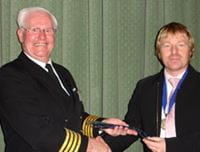 At the conclusion of the meeting Chairman Colin Ruggles presented Captain Wells with a Construction Materials Group tie (and also gave ties to Mrs Margaret Bessey and her son David who had accompanied her to Belgrave Square).

The assembled company then assembly adjourned to the Garden Room for mince pies, wine and animated conversation.