Michael Cotterell was awarded a Rideal Travel Bursary in 2015.
Below, he describes how his attendance at Optical Trapping and Micromanipulation, a sub-conference of SPIE Optics and Photonics 2015 taking place between 9 and 13 August 2015 in San Diego, California, allowed him to present his research and gain invaluable feedback from other attendees.

‘SPIE Optics and Photonics 2015 brought together approximately 4,400 scientific researchers in San Diego, California. The event was split into a variety of sub-conferences all focussed on the study and applications of light and optics.

'I attended the Optical Trapping and Micromanipulation sub-conference. The themes within this sub-conference were diverse, although all concerned with using laser beams to optically trap single or multiple particles (micrometre to nanometre in size) in gas, liquid or even in a vacuum. Themes included: transfer of optical angular momentum from laser beams to trapped particles, using aperture-diffracted laser beams to optically trap proteins in water and probing their structure using acoustic Raman scattering, using structured laser beams to enhance trapping strengths for trapping large objects, modelling the dynamics and forces on particles in optical traps, and studies of the hydrodynamic interactions between multiple particles in liquid solutions.

‘I gave a talk in a session which was focussed on optical manipulation of matter through gaseous media. Talks were either 20 or 30 minutes in length, and I was fortunate to be offered an invited talk of 30 minutes entitled ‘Extinction Cross Section Measurements for a Single Optically Trapped Particle’. I spoke about the single particle cavity ring-down spectroscopy (SP-CRDS) techniques I have been developing in the Bristol Aerosol Research Centre at the University of Bristol, using a Bessel laser beam optical trap to finely control the position of a single aerosol particle at the centre of the fundamental Gaussian mode of a cavity ring-down beam. I presented measurements of how the extinction cross sections for aerosol particles vary with particle size and composition for atmospherically-relevant hygroscopic inorganic species. Modelling the size-dependence of a particle extinction cross section, the refractive index variation with relative humidity can be retrieved precisely, while performing our measurements at multiple wavelengths allows the refractive index to be characterised as a function of both the illumination wavelength (400 to 650 nm) and relative humidity. Such highly-precise and comprehensive refractive index parameterisations are critical for accurate calculations of aerosol radiative forcing efficiency, a key quantity used in climate modelling. As well as giving a talk, a companion paper with the same title will be published in Proceedings of SPIE soon.

‘After my talk and prior to further questioning, conference chair, Gabriel C Spalding, commented on the importance of my research and encouraged the optical trapping community to further apply their techniques within the atmospheric science and aerosol fields. I received questions with regards to assessments of the accuracy with which refractive index retrievals can be made, and how this accuracy scales with the particle size and the CRDS wavelength. I also spoke extensively with Dr Grégory David, a postdoctoral researcher in Professor Ruth Signorell’s group at ETH Zurich. Our group collaborates with that of Professor Signorell and it was very useful to speak at length about recent developments and problems we have encountered. Dr David gave a talk about their use of a quadruple Bessel laser beam (QBB) optical trap to confine single aerosol particles, detailing comprehensive experimental measurements with complementary numerical simulations to study the dynamics of these single particles in QBBs.

‘Other talks I found interesting included those by Profs Halina Rubinsztein-Dunlop and Kishan Dholakia, who both spoke about using the transfer of optical angular momentum from a laser beam to a particle to make the particle spin. In the case of Prof Dholakia, performing such experiments in vacuum reduced the rotational drag allowing particles to spin which should allow studies of particles under high rotational g-forces. In their talks, Drs David Phillips and Simon Hanna spoke about their research into exploiting the hydrodynamic interactions between particles in liquid solutions, where optical manipulation of one particle had implications on the position of a second. Using computer simulations, it was shown that by manipulating arrays of particles and moving them in a rotary fashion, the position of a particle which was free from optical confinement could be finely controlled by the hydrodynamic interactions in three dimensions. 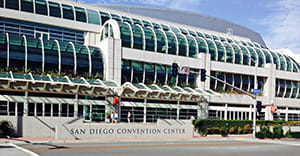 ‘The location of the conference itself, the San Diego Convention Centre at the heart of San Diego, was excellent. There were plenty of things to do outside of the conference, with the USS Midway Naval Museum a short walk from the convention centre, and the world famous San Diego Zoo also within walking distance. I would like to thank Professors Jonathan Reid (project supervisor) and Andrew Orr-Ewing for their help and support over the duration of my PhD project and for giving me the opportunity to attend such a good meeting. I also acknowledge the help of Drs Thomas Preston and Bernard Mason who were co-authors on the conference proceedings manuscript. Finally, thank you very much to the SCI-RSC Rideal Trust for their financial contribution towards travelling to this wonderful conference.’