On 16th March 2018, SCI’s Young Chemists’ Panel and Fine Chemicals group, in collaboration with RSC’s Heterocyclic and Synthesis group, hosted a celebration of organic chemistry for the final of the 5th National Retrosynthesis Competition.

From the 40 teams who entered the preliminary round in December 2017, ten were selected to compete in the final by a panel of experts from academia and industry. The judges were Professor Ross Denton, University of Nottingham, Professor Ed Anderson, University of Oxford, Dr Richard Horan, GSK, and Dr Gail Wrigley, AstraZeneca.

The finalists were drawn from a broad cross-section of chemistry-based organisations, including universities and academic institutions, pharmaceutical companies, contract research organisations, and the agrochemicals sector.

At the final, teams presented their synthetic strategies for the as-yet unsynthesised natural product Pestaloficin A. Teams also answered questions from the audience and judges that challenged their reasoning and route selection.

#UKRetroComp
Looking forward to a good day of chemistry! pic.twitter.com/x2wAEAbhpk

The winners of this year’s competition were The Burton Boys from the University of Oxford, made up of PhD students Kilian Garrec, Joseph Mason, and Sam Chan. 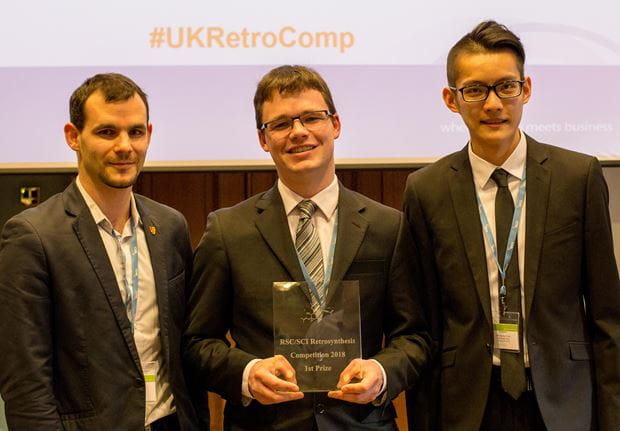 The runners up were The AZ Team from AstraZeneca. The Atoms Family from AstraZeneca took third place. The Burton Boys also took the audience prize for favourite presentation of the day.

The organising committee would like to thank all of the teams who entered the competition for their contributions and for producing such a wide variety of retrosynthesis and forward analysis to Pestaloficin A.

They would also like to thank the judges, guests, attendees, sponsors and exhibitors for their significant input into the event. We would particularly like to thank the RSC and SCI for their generous support for this year’s competition, which included the donation of various prizes and membership packages.

We would also like to acknowledge the leadership of Dr Rob Wybrow from Tennants Fine Chemicals, UK, for bringing the event together.

Based on enthusiastic positive feedback from participants and special guests on the day, the competition was hugely successful, underlining the key central importance of synthetic organic chemistry in both fundamental and applied research in the UK.

Taking that positive momentum forwards, the organising committee has already begun their planning for the 6th National Retrosynthesis Competition, to be held in March 2019.