Debunking the Myths of Flame Retardants

Within the fire and materials community pressure to reduce, if not generally ban the use of halogen-containing, and more specifically bromine-containing flame retardants, has been gathering momentum during the last 15 years or so. Hence so, the SCI Fire and Materials Group meeting in Glasgow on 5 November entitled ‘Bromine flame retardants - Life-savers or eco-villains’ offered the opportunity for delegates to experience a series of lectures from acknowledged experts on each side of the current debate.

24 attendees, including speakers, representatives from the polymer and textile industries as well as academic staff and students from the universities of Bolton and Strathclyde, spent an extremely fruitful and interactive day listening to and discussing the presentations.

The first presentation from Willem Hofland on behalf of the European Flame Retardants Association, a sector group of the European Chemical Industry Council (CEFIC), was an overview of the flame retardant types and markets. He stated that while there were about 140 different chemical compounds used commercially as flame retardants, in round figures, about 70 contained halogen (chlorine or bromine) and 70 were based on non-halogen chemistries which included a mix of inorganic and phosphorus- and nitrogen-containing species. He also emphasised that while halogen-based retardants had become the target of environmentalists based on the identification of some bromine-containing species as being persistent organic pollutants or ‘POPs’, only 3 types at the current time had been banned. 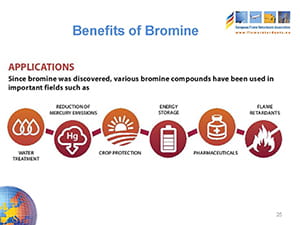 These are the polybrominated biphenyls (PBDs), banned since the late 1990s and the polybrominated diphenyl ethers (PBDPEs) penta- and octabromodiphenyl ether, banned in 2004. In addition, hexabromocyclododecane or hexa has been listed as a restricted chemical from August of this year. The recurring pressures to restrict or even ban the use of decabromodiphenyl ether or deca continue in spite of its having passed EU and other risk assessments with claims that when released into the environment, exposure to UV light causes debromination to the toxic penta- and octabromo- congeners. He finished by debunking the myths often promulgated about flame retardants and more specifically bromine-containing FRs emphasising their effectiveness in increasing fire safety and reducing fire casualties, their recyclability and reductions in toxic gas emissions by reducing the number of fires.
Right: Willem Hofland Presentation Slide

Dr Adrian Beard representing the phosphorus, inorganic and nitrogen flame retardants association or PINFA, complemented the previous presentation and highlighted both the chemistry and properties of the chemical species within this group. He demonstrated how flame retardants were influenced by REACH showing that some restricted chemicals were based not only on halogen chemistry but also phosphorus and boron. 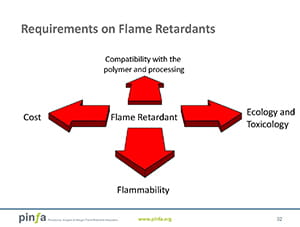 He also stated that the recent US Environmental Protection Agency had concluded that some halogen replacements posed environmental concerns. He showed how PINFA ran a pilot programme to have flame retardants graded under the US Greenscreen® initiative in which 4 grades from the extremes of ‘Avoid - Chemical of high concern’ to ‘prefer - Safer chemical’ could be identified. While focussing on halogen-free flame retardants and their ‘green’ credentials, he most notably emphasised that in choosing any flame retardant for a particular polymer and application there were always interrelated tensions between cost, impact on processibility, the level of flame retardancy required and the environmental impact. Thus the final selection was always a compromise based on the final customer and often regulatory requirements including those relating to the environment.
Right: Adrian Beard Presentation Slide

Peter Wragg, on behalf of the UK flame retardant textile users’ network, FRETWORK, presented an overview of the flame retardant treatments available to and used by the UK textile industry, where levels of flame retardancy and durability demanded were defined by the relevant fire safety requirements. In the particular area of UK domestic furnishing fabrics these are the current UK Furniture and Furnishing Regulations. Since their implementation in 1988 it is reckoned by independent research that the use of these flame retardant fabrics across the UK saves 54 lives and about 780 fire injuries per annum. During this time he identified that hexa (now banned) and deca in combination with antimony III oxide were and the latter still is the most cost-effective flame retardant applied as a backcoating because it is effective on all fabric constructions containing a variety of different fibres and their blends with minimal effects on fabric aesthetics. Attempts to replace this system with phosphorus-based flame retardants are challenged by their being effective only to specific fibres types and blends, durability to the 40°C water soak requirement and cost. Both he and Hofland provided evidence that under the so-called Voluntary Emissions Control Action Programme or VECAP, emissions into the environment of deca by textile processors in the EU had reduced to minimal levels. It was interesting to note, he said, that in the MSD literature associated with the components of a typical deca-based formulation, only the potential carcinogenic properties of the necessary antimony III synergist were highlighted.

Prof Richard Horrocks, of the University of Bolton then gave an overview of the EU COST programme, FLARETEX (Sustainable flame retardancy for textiles and related materials based on nanoparticles substituting conventional chemicals; see also http://www.FLARETEX.eu), now in its fourth final year which has the aim of galvanising academic and industrial researchers across the EU and associated nations in developing novel, non-halogen flame retardants with an emphasis on nanotechnology. Examples of research undertaken to date were presented and it was emphasised that while the introduction of nanoparticles alone into polymeric and textile substrates might slow down the burning process, they were not flame retardants in the sense that they increased ignition resistance and reduced burning times. However, in the presence of conventional and more novel flame retardants, potential synergistic interactions were observed which could lead to reductions in the use of overall levels required to maintain a defined level of flame retardancy.

The morning’s session was completed with a lecture by Dr John Crosse from the University of Lancaster regarding his research into the persistence of brominated flame retardants in the environment with a focus on changes in concentration since the 1980s in gannet and sparrowhawk eggs collected legally during the period to the present day. These reflected the respective food chains within the aquatic environments of Ailsa Craig and Bass Rock in Scottish polluted estuaries on the one hand with those overland food chains across the Midland and Northwest English geographic areas on the other. Analytical focus was on the incidence of the penta- and octa- BDPE congeners whose rise in concentrations in both target species appeared to be similar to the increase in commercial usage during the 1980s and 90s followed by a decline in the post 2000 period once these two had been banned. Little if any correlation was found in terms of their effect on egg shell thickness. Dr Crosse stated that there was recent evidence to suggest that higher brominated congeners were being identified and, although he had no direct evidence, he postulated that these could arise only from the release of deca into the environment and its subsequent debromination. Wragg pointed out that while his penta- and octa- concentration versus time curve appeared to reflect the increasing use of deca since 1988, this was probably coincidental since neither of the measured PBDPEs had been present in backcoated UK furnishing fabrics, although the penta- congener was used in some polyurethane foam fillings prior to its ban.

After lunch, Dr John Liggat (University of Strathclyde), discussed the implications on polymer processing and properties when flame retardant additives are introduced into melt-processed polymers. He pointed out that in producing flame retardant polymers the challenge of achieving an overall acceptability in terms of processibility and application suitability were often greater than that of acceptable flame retardancy. The magnitude of this challenge was little affected by whether halogen-containing or non-halogen-containing polymers were being formulated.

The afternoon continued with two PhD students from the University of Bolton who gave oral presentations to complement the two posters shown by their colleagues during the lunch period. 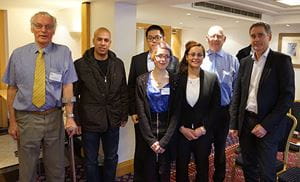 Sara Eivazi in her second year of her PhD studies gave a paper entitled ‘Flame Retardant Back-coated Fabrics: the Challenge to Replace Bromine-containing Formulations’ that dovetailed well with the morning’s papers and this was followed by Katherine Williams, a third year PhD student at Bolton, whose paper was entitled ‘An Intumescent Phosphorus Coating for Polymers and Composites’. This paper demonstrated that while phosphorus-containing flame retardants often possessed char-swelling or intumescent properties, their sensitivity to water and hence durability to water immersion was often a significant problem.
Photo - Left to Right: Richard Horrocks, Awni Alkhazaleh, Katie Williams, Chen Zhou, Sara Eivazi, Willem Hofland, Adrian Beard

To round off the day’s proceedings, Prof Horrocks’s presentation, ‘Halogen vs Non-halogen Flame Retardants: Some Inconvenient truths!’, showed that the challenges to replace halogen-containing flame retardants were not insignificant with the major issue being the universality of halogen-containing systems compared with the substrate or polymer specificity of the non-halogen counterparts. Not only do the latter require to be chosen and formulated more exactly with respect to the polymer, but also higher concentrations are often required to achieve a given level of flame retardancy. The high atomic mass of bromine compared with that of phosphorus, for example, ensures that most Br-containing retardants comprise about 50-80% bromine whereas the latter contain typically only about 8-20% phosphorus. These often higher concentrations of the latter may then aggravate the cost vs processibility vs level flame retardancy balance as discussed previously by Drs Beard and Liggat. He suggested that the increasing environmental pressures appear to focus on the element bromine and not its compounds, which suggests a lack of appreciation that bromine is not exactly a rare element with a presence of about 65ppm in sea water and ~2000ppm in rock salt. Furthermore, the elements of phosphorus and nitrogen are present in many extremely toxic molecules not to mention chemical warfare agents in regard of the former! He concluded that if society wishes to reduce the use of flame retardants based on maximising sustainability while maintaining or increasing levels of fire safety, then maximising the number of chemical species available to the formulator is essential. Finally, in so doing potential synergies between different groups can also be maximised thereby leading to significant reductions in overall application levels.

In summary, the day’s presentations provided an objective overview of the issues involved with bromine-containing flame retardants and demonstrated their strengths against the challenges posed by their replacement. Some of the presentations are available on the SCI web-site and can be accessed using the link below.