Relaunched in memory of eminent flavour chemist Prof Harry Nursten, this two day symposium is now in its third year. It is an opportunity for early career researchers within Flavour and Sensory Science research to present and share their work. This year it was hosted by Northumbria University, Newcastle and presentations were given by delegates from the Universities of Nottingham, Reading and Northumbria who were joined by a number of industry and visiting researchers.

The SCI Food Group sponsored an award for the presentation of work deemed to be the Best Contribution to Flavour and Sensory Science. The judging panel selected the speaker that showed innovation, industry applicability and demonstrated a multidisciplinary approach to the challenges of their project. The speakers were also assessed on their general presentation skills. The panel comprised; Dr Craig Duckham, Chair of the SCI Food Group, Dr Lisa Methven of the Food Group Committee and Lecturer, Food and Nutritional Sciences, University of Reading, UK., Dr Ian Fisk Associate Professor in Food Chemistry, Faculty of Science, University of Nottingham and Dr Georgios Koutsidis, Senior Lecturer in Food Science in the Department of Applied Sciences, University of Northumbria. A second award was made, sponsored by the IFST Sensory Science Group, and was based on a delegates vote for best presentation.

The symposium was opened by Dr Koutsidis and the first session was on Flavour Generation and Release. We were treated to quick fire presentations of 6-7 minutes from first and second year students and of 10-12 minute talks from third and final year postgraduates. After the opening section students were invited to Chair the talks and engaged in animated Q&A discussions with the speakers at the end of each session.

There was a great diversity of topics covered and it is impossible do them all justice by listing them all here but the following is a taster... 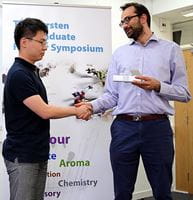 Wei Xia made an excellent presentation and described the enzymic generation of umami compounds from the waste stream of a filamentous fungi fermenter. The aim of the project was to add value to an existing process and to meet a growing industry demand for novel but affordable savoury seasonings and flavour enhancers. Using a range of nucleolase, glutaminase, phosphodiesterase and deaminase enzymes in an optimised process sequence he was able to demonstrate a 2.5 fold increase in glutamic acid yield, and 173 fold and 20 fold increases in glutamine and 5’-inosinic acid generation respectively.

The Impacts of hop acids and polyphenols on the perceived bitterness of beer presented by Olayide Oladokun was the audience choice for the IFST award for Best Presentation. His project was very topical and is a reflection of the huge consumer interest in highly hopped beers. This trend has emerged over the past five years on the back of the so called Craft Brewing revolution that has spread from the USA to Europe, particularly across the UK and Denmark. The emerging understanding of bitterness and the strong genetic component of perception has led to a re-thinking of how the sensory impact on consumers is evaluated. 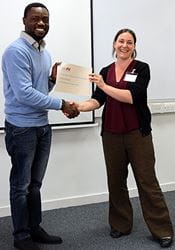 This talk included the results of analysis of 33 carefully selected example larger beers that were evaluated by a trained sensory panel which included the development of a beer bitterness lexicon.

In a related talk, Saskia Hofmann spelt out some of the challenges faced by anyone attempting to standardise sensory testing for the perception of mouthfeel related stimuli. Without once mentioning the oft abused term astringency, she explained how she teased out the attributes generated by panellists tasting black tea model systems and analysed the mouthfeel impact of sugar and fat content whilst also correlating it with viscosity measurements. Surprisingly there is no standard lexicon for the mouthfeel of black tea currently in use by the industry. Perhaps this will change following the conclusion of this study.

With cocoa crops under threat from invasive disease it is only fitting that an investigation into potential alternatives for products that can satisfy our insatiable demand for chocolate was presented at the symposium. The Jackfruit (Artocarpus heteropyllus Lam.) that can weigh in at 36kg may not be the total answer but certainly the talk by Fernanda Papa Spada suggested a potential source of chocolate flavour is available. The seeds of Jackfruit, typically a waste by-product, can make up to 12% of the fruit and when pre-treated and then roasted produce a range of key aroma compounds that are characteristic of chocolate flavour. Fernanda backed up her work with a wide range of chemical extraction and analysis techniques identifying a range of pyrazines, aldehydes, maltol and furaneol, all important flavour impact chemicals in chocolate. 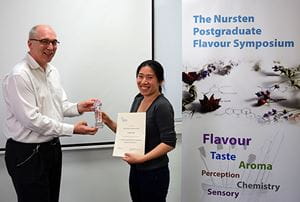 The winner of the SCI award Best Contribution to Flavour Science received a Certificate, free student membership for a year and one hundred and fifty pounds. This year the winning talk Designing stabilisers for the reduction of sodium present in emulsion systems was presented at the symposium by Natalie Chiu from the University of Nottingham. The pressure to reduce salt, sugar and fat in everyday products, maintaining their flavour, taste and texture, whilst exceeding consumer expectations presents an ongoing challenge for formulators, food technologists and new product developers. This talk presented a novel approach to improve salt perception, so that a reduction in levels in the final product can be achieved. In her project Natalie entrapped salt in an aqueous phase within a water/oil/water (w/o/w) emulsion; this in itself in not new technology, what was innovative was the use of a modified starch surfactant where the level of modification is tailored to 3% or less to meet regulatory requirements. Emulsions were destabilised in the mouth by salivary amylase and the degree of starch modification was correlated with the perception of saltiness.

The standard of talks from all postgraduates was very high and the advances in flavour chemistry and sensory science continue to be heralded at this symposium. We look forward to seeing how the research programmes have progressed at next year’s event to be hosted by the University of Reading.