A team at the Tokyo Institute of Technology, Japan, have identified an enzyme from the glycerol-3-phosphate acyltransferase (GPAT) family – involved in triacylglycerol (TAG) production – that could increase the effectiveness of biofuel production.

The enzyme, known as GPAT1, is found in abundance in the alga C. merolae when in adverse conditions, such as nitrogen deprivation, leading to a build-up of TAGs – an oil that is the main component of human and animal body fat that can also be present in vegetable fat. In some algae, 60% of its cell dry weight is made up of oils.

TAG conversion into biofuel produces high yields of fuel – up to 100% – due to the high density of esterified fatty acids present.

The Tokyo group reported that TAG productivity could be increased by more than 56 times in a strain of C. merolae that overexpresses GPAT1 than a control. There were no negative effects of algal growth noted. 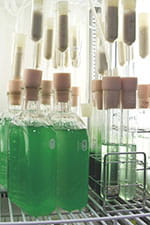 The red alga grown in culture in the laboratory. Image: Sousuke Imamura

Biofuel is produced by renewable biomass material, either directly from plants or indirectly from agricultural, domestic, and industrial waste. Its use in transport and heating could provide us with a low carbon and cost-effective alternative to fossil fuels, such as coal and gas. In 2017, global biofuel production increased by 3.5% to 84bn metric tonnes.

‘Our results indicate that the reaction catalysed by the GPAT1 is a rate-limiting step for TAG synthesis in C. merolae and would be a potential target for improvement of TAG productivity in microalgae,’ the group said.

Previous research from this group and others has found that GPAT1 and GPAT2 are involved in TAG accumulation in C. melorae, and now the Tokyo team are identifying the transcription factors that regulate the genes involved in producing the two GPATs.

‘If we can identify such regulators and modify their function, TAG productivity will be further improved because transcription factors affects the expression of a wide range of genes including GPAT1-related genes,’ they said.

‘This kind of approach based on the fundamental molecular mechanism of TAG synthesis should lead to successful commercial biofuel production using microalgae.’