College of Scholars gets social

The 2017 College of Scholars Day was held on 20 November at SCI HQ in London. As ever, it was a lively affair with members of the College and Early Careers members enjoying a varied day at Belgrave Square.

Following a welcome introduction from College Principal Prof Alan Heaton, Georgina Hines and Simon Frost from SCI’s Digital Media team presented an overview of SCI’s digital media platforms, focusing on how attendees can get involved – in particular, with the SCI blog, podcasts, Twitter, and Facebook groups.

This was followed by short presentations from Scholars past and present. James Douglas, who was a scholar in 2009–2011, talked about his career since being an SCI scholar, while SCI-Royal Society scholar Joshua Green described his current work and progress with support from SCI. Joshua is working towards a PhD investigating the mechanisms of spray coating of powders and particles in tumbling drums with Royal Society Industry Fellow Dr Rachel Smith at the University of Sheffield.

Ex-scholar James Womack of the University of Southampton and Katherine Geoghegan from the University of Edinburgh talked about the expanding SCI Ambassadors programme: how they got involved, what it involves, and the benefits of the programme.

Before lunch, participants got a briefing on the status of the SCI Mentoring Programme, in particular the progress of the pilot scheme, and after lunch SCI mentoring consultant, Karen Parker, led a very useful mentee training session. 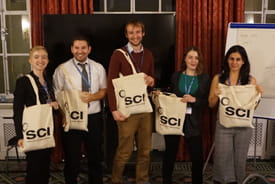 The winning team of the College of Scholars 2017 mini-Bright SCIdea Challenge.

Following an update on SCI’s Bright SCIdea Challenge from Clarice Williams, an interactive group workshop session led by Georgina Hines and Simon Frost, saw the attendees split into four groups to work together to devise an innovative business concept and then present it.

The winning team proposed a non-invasive testing method for diabetics to monitor their blood sugar levels, while the runners-up delivered presentations on a wound management system, a wearable patch that changes colour when the wearer is at risk of overexposure to the sun, and a process for manufacturing fully recyclable coffee cups.

An early evening drinks reception and networking rounded out another successful College of Scholars Day. Huge thanks go to all involved with organising the event – especially Callie Seaman from the Early Careers Committee and Karen Hobbs and her team.