This year, SCI is launching the Bright SCIdea Challenge - a new business planning competition, encouraging UK/ ROI university students to think about the process of starting their own business or launching a new product.

More business training videos will be published over the coming weeks, covering topics such as pitching tips, intellectual property, and managing your money. As well as Lucinda, applicants will have access to advice from Victor Christou, CEO of Cambridge Innovation Capital, Sharon Todd, Executive Director at SCI, and Georgia Lubbock, Product Manager at Synthomer.

Finalists will be invited to London in early 2018 to pitch their ideas to a panel of high-profile judges, allowing them to raise their profile within the commercial scientific community, while competing for a chance to win a £1,000 cash prize.

Over the last few months, SCI and our ambassadors have been busy promoting the competition.
James Womack, a post-doctoral researcher and SCI Ambassador, organised an SCI exhibition stall and several short introductory talks about the Bright SCIdea Challenge at his university – Southampton. 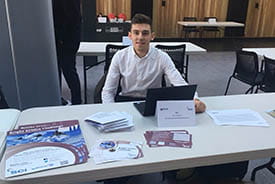 The Bright SCIdea Challenge is ‘a great opportunity for all entrants to obtain some free business training and to hone their entrepreneurial and science communication skills,’ Womack said. ‘I think that even small acts of promotion for events such as Bright SCIdea can be very valuable. An e-mail, flyer, or short talk can act as a gateway to a greater world of opportunity for a student.’

‘The main draw of being an SCI ambassador is the chance to give something back to SCI after having received support through my PhD with an SCI Scholarship,’ he said.

The concept for the Bright SCIdea Challenge was conceived in a SCI College of Scholars’ day workshop in 2015 by James Adams and Hibaaq Mohamud – PhD researchers at the University of Manchester and the National Physical Laboratory respectively.

Teams at the workshop then had to pitch to a panel of the SCI managerial committee and business leaders. Adams explained that, after the event, Robin Harrison from Synthomer approached himself and Hibaaq, and offered £1,000 to get the event up and running.

‘One of the best things about being involved with SCI, specifically with this project, is that you actually have the chance to implement an idea,’ Adams said. ‘It’s been a fantastic experience so far and very rewarding to see an idea put into practice. I can’t wait to attend the final talks and see what SCIdea’s people have come up with.’