Robotics revolution in the agriculture sector

Currently one of the least digitised industries in the world, the agricultural sector is fast becoming a hub of innovation in robotics. One report suggests the agricultural robotics industry will be worth £8.5bn by 2027.

Feeding the increasing global population – set to hit 8bn by 2023 –  is a major concern in the sector, with farmers already stretched to capacity with current technology.

With this said, the European Commission – via Horizon 2020 – has launched a programme and fund to drive research and innovation in the area. Developments in precision agriculture, which uses data and technology for a more controlled approach to farming management, has been particularly encouraging.

But similar to other labour-intensive industries, such as manufacturing, robots could be used to relieve workers in difficult conditions, and there are many projects close to commercialisation.

One such project is SWEEPER – a greenhouse harvesting tool that can detect when sweet peppers are ready to harvest through sensors. SWEEPER runs between the vines on a rail and uses GPS tracking to navigate through its environment.

Although focusing on sweet peppers for this research, the group say that the technology could be applied to other fruits and crops.

The EU-funded consortium in charge of the development of the SWEEPER robot is made up of six academic and industry partners from four countries: Belgium, Sweden, Israel and the Netherlands, where the research is based.

‘The reduction in the labour force has put major pressure on the competitiveness of the European greenhouse sector,’ said Jos Balendonck, project coordinator from Wageningen University & Research, the Netherlands.

‘We hope to develop the technology that will prevent greenhouse food production from migrating out of Europe due to the 40 % expected rise in labour costs over the coming decade.’

Currently testing the second version of the robot, the research group already envision adding improvements – from sensors that can detect vitamin content, sweetness levels and the sweet pepper’s expected shelf life to the ability to alert farmers when crop disease could hit their crops in advance.

At the start of the season, an autonomous tractor sows the crops into the soil using GPS positioning, and sprays them periodically with pesticides throughout their growth. A separate rover takes soil samples to analyse nutrient content and to check pH levels are maintained. 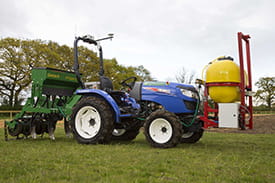 When the crops begin to sprout from the ground a drone is used to monitor growth by taking images. Finally, a combine harvester controlled from outside of the field harvests the crops.

Kit Franklin, an Agricultural Engineering lecturer at the university, said: ‘As a team, we believe there is now no technological barrier to automated field agriculture. This project gives us the opportunity to prove this and change current public perception.’

Despite innovation in the area, farmers have been slow to embrace the new technology, partially due to the lack of high quality data available that would allow more flexibility in the sector. Others, including the wider public, worry that development will lead to job losses in the industry.

However, scientists say the jobs will still be there but farmers and agricultural workers will use their skills to control the autonomous systems from behind the scenes instead.

‘Automation will facilitate a sustainable system where multiple smaller, lighter machines will enter the field, minimising the level of compaction,’ said Franklin.

‘These small autonomous machines will in turn facilitate high resolution precision farming, where different areas of the field, and possibly even individual plants can be treated separately, optimising and potentially reducing inputs being used in field agriculture.’