Researchers have engineered a shortcut for a photosynthetic glitch in crops, improving growth by 40%, that could be used to tackle food security issues around the world.
Cassie Sims

Plants generate their energy from sunlight via photosynthesis, however many crops have a photosynthetic glitch, which costs them a significant amount of energy that could be used for growth. This glitch has been shortened using careful engineering by researchers from the University of Illinois and US Department of Agriculture’s Agricultural Research Service, to generate plants with a 40% increase in productivity in real-world conditions.

During photosynthesis, carbon dioxide (CO2) and water are converted into sugars by the enzyme Rubisco, which is fuelled by energy from sunlight. Rubisco is the planets most abundant protein, but its efficiency has resulted in an oxygen-rich atmosphere, and it cannot reliably distinguish between CO2 and oxygen (O2). Approximately 20% of the time, O2 is grabbed by Rubisco instead of CO2, and then converted into a compound which is toxic to plants. This compound can be recycled through a process known as photorespiration.

Photorespiration usually occurs via an energy-intensive route through the plant cell. Scientists predict that hundreds of millions of people could be fed with the calories lost to photorespiration. ‘Photorespiration is anti-photosynthesis,' said Paul South, a molecular biologist with the Agricultural Research Service and lead author of the study. ‘It costs the plant precious energy and resources that it could have invested in photosynthesis to produce more growth and yield.’

In this study, alternate routes for the process have been engineered, allowing the plant to save resources better utilised for growth. The scientists generated three alternate routes using different sets of promoters and genes, which were then stress tested in 1,700 individual plants to find the best performers. 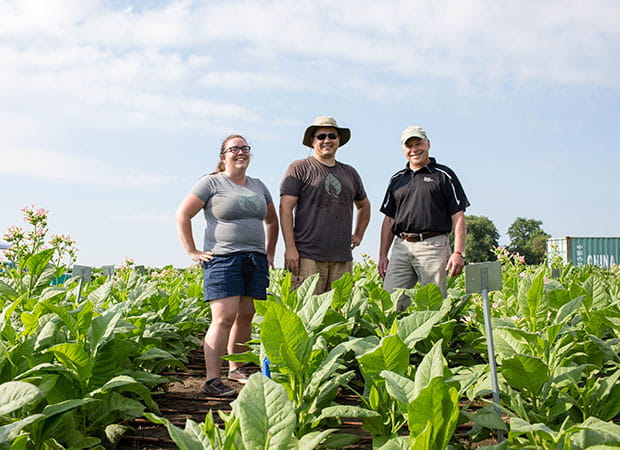 Two years of field studies, in real-world agronomic conditions, showed that the engineered crops developed faster and to a higher overall biomass, including a 50% increase in the stem biomass. Initial studies were undertaken in model crop tobacco resulting in a 40% boost in plant growth. Now, scientists will be attempting to translate these findings into other crops, including soybean, rice, tomato and potato.

The researchers believe this project will help with feeding the world in the future. ‘Rubisco has even more trouble picking out CO2 from O2 as it gets hotter, causing more photorespiration’ said Amanda Cavanagh, a postdoctoral researcher working on the project at the University of Illinois. ‘Our goal is to build better plants that can take the heat today and in the future, to help equip farmers with the technology they need to feed the world.’