This year’s Westminster Medal winner was Sophie Morse, a final year PhD Student at Imperial College London’s Department of Bioengineering, for her poster, Getting drugs to the brain using ultrasound and microbubbles.
Georgina Hines

Sophie was presented with the Westminster Medal, which is given to the young scientist who best communicates her research to a set of experienced judges, by SCI Trustee Inna Baigozina-Goreli and Nick Bourne, who is a member of SCI’s London group on 13 March 2019.

The Westminster Medal is awarded at the annual STEM for Britain event, where the best and brightest young scientists are invited to Parliament to showcase their research to MPs and other policymakers. The event is hosted by the Parliamentary & Scientific Committee, which is Chaired by Stephen Metcalfe MP. 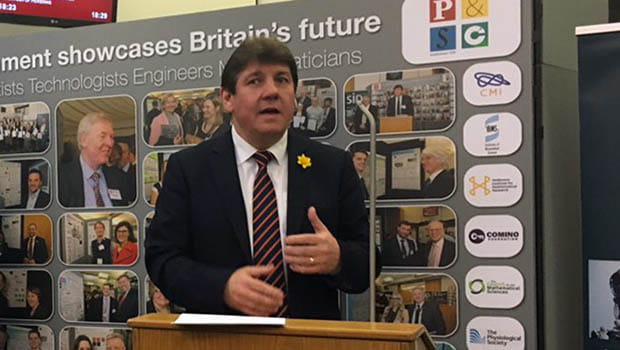 Posters were presented in five categories: engineering, biological and biomedical sciences, mathematical sciences, chemistry, and physics. The winner from each category were then interviewed and judged on their ability to communicate their science to a lay audience.

The winner of this round then received the Westminster Medal, which is sponsored each year by SCI in honour of Dr Eric Wharton, who founded SET for Britain (as it was formerly known) and was a long-time SCI member instrumental to the ongoing success of our London group.

The results in each category were:

Congratulations to all of the winners from this year’s STEM for Britain! We look forward to seeing more young talent in 2020.