The Science and Technology of Food Emulsions was hosted by the Lipids Group, supported by Euro Fed Lipid and The British Society of Rheology in London on 21 - 22 June 2012.

In addition to invited lectures, there was a poster session and the presentation of the Hilditch Award to Prof Julian McClements from the University of Massachusetts, USA. This was followed by a wine reception and dinner at the Royal Institution of Great Britain and a superb exhibition. The conference was attended by 93 delegates including three exhibitors and two members of the press. Around one third came from outside the UK including the USA and just over half from industry.

Summary of the scientific programme

The conference kicked off with Erich Windhab from ETH Zurich (Swiss Federal Institute of Technology) with a keynote lecture on smart processing in relation to perception of liquid and semi solid food systems. As always, Erich gave a very impressive talk showing the interplay between processing, structure and properties, with results from experiments and modelling using a wide range of techniques. He heads a large research team and over the last 20 years he has really pushed the boundaries, and he can only be congratulated on his achievements on producing ingenious devices to manipulate and measure emulsion systems.

Fotis Spyropoulos from Birmingham followed with an in-depth insight on membrane processing of emulsions. Birmingham Chemical Engineering has developed membrane processing and is one of the groups promoting rotating membranes over cross flow membranes. Fotis demonstrated that emulsions with droplet diameters smaller than the average pore size can be produced provided materials system and processing conditions have been chosen appropriately.

Surface membranes
The future may lie in surface membranes which were introduced by Richard Holdich from Micropore Technologies, Loughborough UK. Richard is also a Professor at Loughborough University, Department of Chemical Engineering. His mentioning of processing water-in-oil emulsions for application in chocolate raised a few eyebrows, and was discussed in detail following his talk.

Formulation of stable double emulsions is a great challenge, and Axel Syrbe from the Nestlé Research Centre, Lausanne CH, compared the task of improving double emulsion stability to the mythical Sisyphus pushing a rock up a hill for eternity. Axel discussed the many pathways leading to instability but was also able to show us some results from their research. Interest in double emulsions is vast as oil droplets 'stuffed' with water present a much better fat replacer than, for example, swollen starch granules. Double emulsion stability is possible based on the oil soluble emulsifier PGPR (Polyglycerolpolyricinoleate); however, it is highly regulated and not commercially relevant for dressings and similar products. He left us with the message to develop suitable emulsifiers - tough job!

Mechanism of droplet formation
Goran Vladisavljevic from Loughborough University explained the mechanism of droplet formation, and how to manipulate single droplets in planar microfluidic devices aided by impressive video footage of droplet generation. He introduced microfluidic screening of digestive enzymes as another application of microfluidics with relevance to foods. The penultimate contribution of the day came from David Gray from Nottingham entitled 'Oil body emulsions'. David has long been interested in these fascinating, naturally-occurring, emulsions and what we can learn from them. 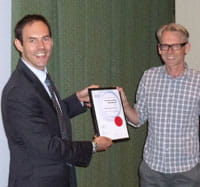 The Hilditch Memorial Lecture by Julian McClements (pictured, right, with Andy Stapley) was introduced by Eric Dickinson, Leeds UK. Julian began with a discussion on making Star Trek a reality noting that 3D printing of foods is already happening. He introduced a couple of examples from the impressive number of complex food structures he has developed over the last few years; filled hydrogel beads, and nanoemulsions (drop sizes less than 100 nm). Both are being developed as (low fat) delivery systems which can improve the functionality of foods, such as improved control of digestibility, improved control of release rates of active components, and control of satiety. The control can be readily achieved via manipulating factors which can be varied by altering processing conditions (such as droplet size, pH and ionic strength).

Day two started with Phil Cox from Birmingham sharing his research into air-filled emulsions with us (yes, these are not foams!). Stabilisation is through hydrophobins and as these are somewhat difficult as the two groups of hydrophobins out there (named class 1 and class 2) either don't dissolve well or are 'hyperactive,' and adsorb everywhere in the equipment before there is a chance to create an interface to adsorb onto. Phil has just started looking into identifying intermediate behaving proteins and was able to show some impressive findings.

Pickering particles
Hydrophobins work like Pickering particles which were the subject of Eric Dickinson's lecture. Eric explained the fundamentals of particle, or Pickering, stabilisation of emulsion interfaces (regularly exceeding the stability produced with conventional emulsifiers) and an overview of what is possible based on different food materials (eg chitin and starch). Although Pickering (and indeed Ramsden) were researching this field over a hundred years ago, it is only in the last ten years that the use of such systems has been seriously considered. The number of published papers on the topic has mushroomed during the same period. He finished with the remark that a lot more food-related research is required in this field.

Next came Paul Clegg from Edinburgh, UK, talking about high internal phase Pickering emulsions and proposing that their formation resembles processes observed during granulation, and this was debated in the discussion. In his work he encounters gelation during emulsification. Paul showed many very nice confocal laser-scanning micrographs.

Marc Anton from INRA in France talked about the specifics of egg yolk components such as cholesterols in relation to applications and processes. This was a fascinating account of the behaviour of an extremely complex system.

Water-in-water emulsions
Straying away from conventional emulsion systems, Bill Frith introduced water-in-water emulsions and their phase behaviour. In short, they behave like oil/water based emulsions with a typically three decade lower interfacial tension. They form upon incompatibility of two hydrocolloids in aqueous solution which can be steered through charge, concentration, salt and temperature.

The final session of the conference related to oral perception and featured a keynote lecture by George van Aken from NIZO in The Netherlands on oral processing in relation to sensory perception. He is widely experienced in analysing the friction behaviour of foods between tongue and palate with a new development called acoustic tribology. One of his aims is to understand creaminess and he stated that fat adhesion and retention on the tongue are larger for more unstable emulsions which relates to increased creaminess. For semi-solid foods George introduced an in vitro tool to reproducibly generate gel fragments for analysis of what is happening during oral processing. This was looked at in great detail and for many delegates the whole eating experience will never quite be the same again!

Interfacial rheology and visualisation tools
Philip Erni from Firmenich CH then provided an insight into his industry-based research featuring an impressive array of interfacial rheology and visualisation tools. Whereas in most cases the aim of emulsification is to produce small droplets, for flavour delivery it sometimes is desirable to make large uniformly sized droplets. This is nearly impossible with standard equipment and membrane emulsification was mentioned yet again. It really appears to be a genuine processing choice of the future.

Finally, Sue Francis from Nottingham introduced neural imaging studies to investigate oral perception of fat emulsions. Her team's research has shown that flavour perception is diminished in the presence of fat.

The poster session consisted of 12 posters from all around Europe. An opportunity was given to the poster presenters to present their work in less than four minutes at the end of the first session. One of the main represented themes was 'multiple emulsions:' effect of different emulsifiers and type of analyses used to assess their stability. Methods of producing emulsions such as using Couette flow and nanoemulsification via ultrasound were presented, as well as applications of emulsions in the brewing industry and formation of emulsions with natural emulsifiers.


Conference attendees, as well as our invited speakers, commended the conference organisers Andy Stapley from Loughborough and Bettina Wolf from Nottingham on the line-up of speakers.