The London group is promising a rare glimpse into feudal Japan this autumn in one of its evening lectures.

In nineteenth century Japan, it was forbidden to leave the country, and to do so was punishable by death. But in 1863 five young students wanted to study the success of the Industrial Revolution in England, and later return to Japan to bring about its transformation into a modern society. They were known as the Choshu Five. Amazingly, they achieved this, and 40 years later Japan had become a leading industrialised country.

The London Group's talk on the history of the Choshu Five forms part of a series of events to commemorate the 150th anniversary of their arrival in the UK. The talk will be delivered by Choshu Five and Japanese historian, Prof Andrew Cobbing, and will take place on Tuesday 3 December at 6pm in UCL's chemistry department. As usual, the lecture is free and open to everyone, and booking is not required.

When the Choshu Five arrived in the UK, they were enrolled at University College London under the supervision of Prof Alexander Williamson in the chemistry department. Not only did he supervise their training, but his wife Catherine taught them English, and they stayed with the Williamsons at their home in Haverstock Hill.

Whilst at UCL, the Choshu Five studied analytical chemistry, and visited many industrial and commercial sites, gaining valuable experience which they would take back with them.

In his talk, Prof Cobbing will explain how very few in the UK are aware of the far-reaching impact made on the foundation of modern Japan by the five young students, though the story is much better known in Japan.

The five blazed the trail for others, including a group of 19 from the Satsuma clan, who were also supported by the Williamsons. Four of these died from tuberculosis in the later 19th century, and were buried at Brookwood Cemetery near Woking. Brookwood also became the final resting place for Prof and Mrs Williamson. 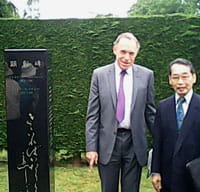 A 150th anniversary commemoration ceremony was held at Brookwood on 2 July 2013, attended by over 200 people from Japan, UK Japanese associations, the Japanese Embassy, representatives from UCL, SCI (pictured) and the RSC. The Japanese Ambassador, His Excellency Mr Keichi Hayashi, unveiled a new memorial to the Williamsons, alongside the grave of the four students who did not return to Japan.

This ceremony was followed by a reception at the Japanese Embassy, and the next day by a further ceremony and dinner at UCL, which has a memorial plaque for the Choshu Five in its Japanese garden.

SCI was represented at these events by Dr Fred Parrett and Dr Ryuji Suzuki of the SCI London Regional Group.