On a glorious Sunday afternoon on 17 June 2012, 30 SCI members and guests enjoyed lunch and a guided tour of the Chelsea Physic Garden, a hidden gem in the centre of London. As chemists we were familiar with many of the connections between plants and medicine, but this garden is a living museum of links to which most of us are blissfully unaware.

As the second oldest botanic garden in England it still fulfils the traditional functions of scientific research and plant conservation and undertakes to educate and inform as well as to provide the amenity of a walled 'secret' garden in the heart of London. With its four acre enclosed site beside the Thames embankment it has a warm micro-climate that supports the cultivation of plants normally found in warmer parts of the world.

The Chelsea Physic Garden was founded in 1673 by the Worshipful Society of Apothecaries of London. It was acquired in 1712 by the botanist, chemist and physician Sir Hans Sloane, who had studied at the gardens in his younger days. In 1687 he worked as a physician in the West Indies to the second Duke of Albemarle, Governor of Jamaica. He was interested in a drink the locals made from cocoa beans. 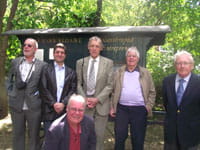 He developed a recipe by mixing the product of the beans with milk and sugar, and so introduced milk chocolate to England. His recipe was later sold to the Cadbury brothers. One of the displays on the garden tour is devoted to Sloane's chocolate development, and some of the SCI members on the tour stopped for the photograph shown. This is just one of the fascinating links to the use of plants in our everyday life visually demonstrated in these gardens.

The legacy of Sloane remains in London place names, and in the British Museum, which he founded, but one of his greatest memorials must be the gardens. We should all be forever grateful to Sloane who in 1722 leased the gardens to the Society of Apothecaries for £5 a year in perpetuity.

Jealously guarded during the tenure of the Worshipful Society of Apothecaries, in 1983 the garden became a registered charity and was opened to the general public for the first time. The garden is a member of the London Museums of Health and Medicine.