The mosquito is the world's most dangerous animal, accounting for hundreds of millions of malaria and dengue cases each year. In the global war against the mosquito it is the mosquito that is winning as trends such as globalisation and urbanisation provide transportation and environments that exacerbate the threat of mosquito borne diseases.

In his talk Dr Parry argued that current tools have proved un­successful in combating this threat and that new approaches are desperately needed. His solution is that genetic engineering provides an answer by allowing the use of genetically 'sterile' mosquitoes that are released into an urban environment to reduce rapidly the disease carrying species. In presenting such a solution Dr Parry argued that proponents must address the perceptions around GM technology with clear communication and transparency.

In July, it was announced that Oxitec is opening in Brazil its first mosquito production unit to fight the dengue vector, Aedes aegypti. 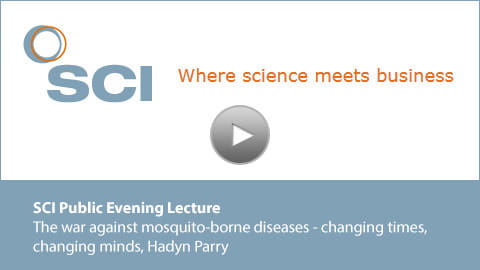 This lecture forms part of SCI's 2014/15 Outreach Programme of Evening Lectures, which are free and open to all. Further information on the upcoming and past public lectures can be found via the link below.

About the Speaker
Dr Hadyn Parry is the Chief Executive of Oxitec, an Oxfordshire based company pioneering the control of insects that spread disease and damage crops.

Dr Parry has an extensive background in the Life Science sector. He has held various positions helping to develop solutions for farmers and public health authorities and has been involved in the development of GM crops for crop protection and seeds companies. He was also Chairman of Help for Heroes, a UK charity founded in 2007 to support wounded British soldiers from its foundation up to 2013.