SCI welcomed approximately 90 members to the AGM, evening lecture and reception on 4 July 2012. In addition to the election of new members to the board of trustees and its advisory committees, the day featured a series of presentations and talks. The annual summer lecture was presented by incoming Hon President Paul Booth.

A video of this lecture can be seen below. 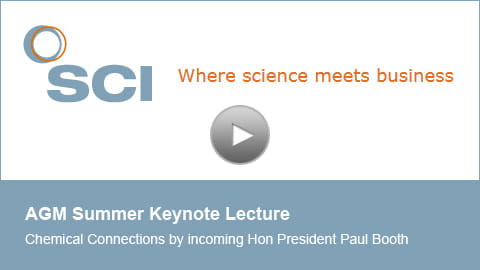 We then enjoyed presentations from two SCI Scholars, Miss Aditi Borkar re 'Combining NMR experimentation and computer simulations to characterise the dynamics of RNA' and Mr James Womack re 'Chemistry by numbers, or how I learned to stop worrying and love computational chemistry'. The other scholar, Mr James Frost, was unable to attend as he was presenting at a conference in Australia. More information about the DSA recipients and the scholars' presentations will be published later.

The AGM noted the unopposed election of the following candidates:

The Chair also noted that Dr Peter Hambleton would be reappointed ex-officio as a member of the Board of Trustees by virtue of his re-election as Chair of the Publications Advisory Committee. Profiles for all candidates were posted to all members prior to the AGM.

The Chairman encouraged SCI to concentrate on Impact, Influence and Income to achieve continued success. The AGM approved the Board of Trustees' report for 2011 and the Financial Statements for 2011. A summary version, in the form of the Annual Review 2011, was circulated to all members with the AGM pack and is available on our About Us page (link below). The Trustees' Report, including the full financial statements, is also available. Hard copies may be requested from communications@soci.org.

The AGM also approved the appointment of RSM Tenon as Auditors until the conclusion of the 2013 AGM. The Hon Treasurer emphasised the importance of continuing to strive to achieve a balanced budget to ensure the sustainability of SCI. He also advised that SCI has received a generous legacy of over £1.1 million from former SCI member, Dr Sydney Andrew, to be used for a lecture and research on Neglected Science (areas of science, which though of importance in agriculture and the chemical industry, receive scant attention from academic research).

Membership subscriptions for 2013 were confirmed at the same rate as 2012. The Hon Secretary, Dr Len Copping, outlined the role of the Membership Affairs Committee and thanked members for their active support during 2011.

The Executive Director highlighted the many achievements of 2011, despite the challenging market conditions, including:

Members then heard a message from the retiring Hon President, Dr Stephanie Burns which was followed by the inauguration of SCI's new Hon. President, Mr Paul Booth, Chairman of SABIC UK Petrochemicals.

Paul Booth presented the Annual Summer Keynote Lecture on the subject of Chemical Connections, considering how current and emerging knowledge can be connected and harnessed to achieve the extraction of new and existing natural resources to build new products and processes which will underpin the UK's industrial growth in the future. The lecture and reception were generously sponsored by SCI's investment managers, Thomas Miller Investments.

Feedback from members and guests has been very positive so we look forward to seeing as many of you as possible at next year's AGM on 3 July 2013.