New Members of the Board of Trustees

The Board of Trustees is delighted to announce the co-option of two new members, Professor Clive Thompson and Dr Brian Iddon, as well as the co-option of a new member of the Finance and Investments Advisory Committee (FIAC), Dr Roger Gilmour. Read on to find out more about them and the valuable contributions they are making to SCI.

Dr Brian Iddon
Dr Iddon has had a long and distinguished career, mainly at Salford University where he became a reader in organic chemistry before entering the world of politics. He served on Bolton Council for 21 years (chairman of housing, 1986- 1996) and, from 1997-2010, as MP for Bolton South East. He is now retired. Brian is a member of the external advisory board in the School of Chemistry at Manchester University and was a visiting professor at Liverpool University in the Department of Chemistry. He became well known for his popular demonstration lecture, 'The Magic of Chemistry', which he presented for 29 years throughout Britain and across Europe.

He has published over 100 refereed research papers as well as authoring several books. In 1981, the University of Hull awarded him the degree of Doctor of Science 'for his international contributions to heterocyclic organic chemistry'. Brian has received several other awards, including Honorary Membership of SCI and Honorary Fellowships of the RSC and the IChemE. He received the 'Parliamentarian of the Year Award' from Citizens Advice in 2010. Dr Iddon brings to the Board of Trustees not only outstanding scientific experience, but also extensive knowledge of the political scene, having served on the Science and Technology Select Committee, the Parliamentary and Scientific Committee and many other parliamentary committees associated with STEM subjects. 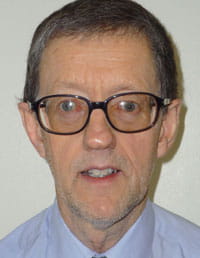 Professor K Clive Thompson
Professor Thompson is an active and valued supporter of SCI with a depth of knowledge that relates to industry and the representation of industry. He is chief scientist at ALcontrol Laboratories, one of the largest food and environmental contract laboratory organisations in Europe. The company operates in 11 European countries and is currently expanding to take its services into new markets.

He has received a Distinguished Service Certificate from British Standards and is the holder of the 2003 SCI Environmental Medal. Over the last 40 years, he has gained very broad experience in the management of environmental laboratories and also in the handling of a wide variety of associated technical issues, having managed laboratories at both Severn Trent and Yorkshire Water. He has produced a significant number of peer-reviewed papers and books. He also serves on over 20 national and international committees, including a number of BSi, ISO and CEN water, soil, sludge, soil improver and growing media committees.

He serves on the Environment, Health and Safety, Yorkshire and the Humber, and Science and Enterprise Groups and has helped to organise over 20 international conferences and numerous one-day UK events.

Dr Roger Gilmour
Dr Gilmour has extensive experience developing businesses for both government and industry, from start-ups to established organisations. Since retiring as the director of the Centre for Emergency Preparedness and Response at the Health Protection Agency (HPA), he has worked for a number of organisations as a consultant in emergency response and business continuity, strategic planning, and mentoring. He has extensive experience of developing and managing emergency preparedness; responses to major incidents and emergencies; research programmes; start-up companies; and business plans.

Dr Gilmour was part of the HPA's team during major emergencies, such as the foot and mouth epidemic and the 2006 polonium poisoning (he was the HPA national incident director). He has served as president/CEO/director of various companies in the food technology and biotechnology sectors, and of a government research organisation (Centre for Applied Microbiology and Research), as well as a director of the Medical Research Council's Collaborative Research Centre. He holds a BSc (chemistry) from Edinburgh University and a PhD (microbiology) from Heriot Watt University.