The SCI Scotland Group ran a PhD student competition in February 2016. Students from across Scotland (working in scientific research) competed for 12 free one-year SCI memberships. The students were asked to submit a short (~600 word) article describing their PhD research project and its relevance to the SCI strapline 'where science meets business', in a format suitable for publication in a scientific news magazine read by scientifically literate members of the general public (such as New Scientist). The 12 winners will be introduced to senior academics and industry contacts working in Scotland and will be given opportunities to build their networks and develop future skills to help with their onward careers. Lulu Tucker (University of Edinburgh) was one of the top three entrants awarded and her award-winning article on changing the pathway of drug discovery using mass spectrometry imaging, which will also be published in C&I magazine, can be found below.

Drug discovery is an expensive and meticulous process, costing on average more than £1.1 billion and taking up to 12 years to successfully approve and market a single drug. Moreover, the majority of these drug trials fail at the pre-clinical stages in which animals provide an extremely expensive model system to assess in vivo toxicity prior to human trials. Furthermore, with the European legislation introduced in 2010 to ‘Reduce, Refine, and Replace’ (3Rs) animal models in scientific research, there is an important requirement for alternative systems in which the pharmacokinetic properties of drugs can be assessed.

Conventionally monolayer cell culture is used in drug development, but despite simplifying any analytical techniques, they provide a homogenous and unrepresentative environment of a tumour. Multicellular tumour spheroids (MCTS) are spherical self-assembled 3D cell clusters growing up to 1mm in diameter and offer a promising ex vivo model for assessing drug penetration and efficacy. The central cells are apoptotic, resembling those at the centre of a tumour mass that lack access to oxygen, glucose and the ability to excrete waste products. The intermediate layer is quiescent (silent) and the outer cells are rapidly proliferating, bearing similarity to tumour cells that are in close proximity to blood vessels. Through this layered structure MCTS are able to develop pH, redox, oxygen and metabolite gradients that highly resemble those observed in the microenvironment of avascular tumours. 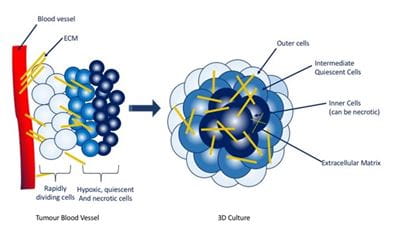 Local delivery of therapeutic compounds to tumours is hindered by the heterogeneity of the vascular network, density of the extracellular matrix and an abnormal blood flow from its sparse underdeveloped vasculature. This results in a sub-therapeutic exposure to many cancer cells, promoting tumour resistance, repopulation, and consequentially a reduced efficacy of current therapeutics. For this reason, assessing the toxicology and localisation of drugs is an indispensable part of the drug development process. Current approaches use radiolabelled tags that are unable to differentiate between the parent drug and its metabolites, preventing the identification of any potentially toxic species to healthy cells upon drug metabolism, as well as the tag itself altering the drug’s properties. Therefore, the development of Mass Spectrometry Imaging (MSI) as a label-free method of simultaneously localizing both the drug and its metabolites in whole body samples, organs, and tissues has transformed this pharmacokinetic evaluation.

MSI works in four stages: preparation, ionization, separation and detection. First the sample is frozen, cut into thin sections and a matrix is applied. This matrix, when targeted with a laser is able to ionize into the gas phase and pass its charge onto the molecules in the tissue sample. These molecules can then be separated based on their mass to charge ratio (m/z) and each one is subsequently detected. This process is repeated at each pixel and the spectra attained can be put together to produce a 2D ion density map, where a specific m/z value can be selected and the distribution and relative intensity of that value shown across the sample. 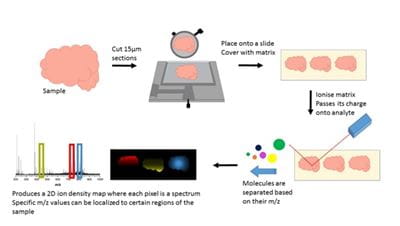 My research aims to combine these two technologies, and use MCTS as a pre-clinical model to assess the metabolism and distribution of drugs using MSI. The main challenge is applying a technology that has been used in in vivo animal studies, and scale it down to a system that is less than 0.5mm in diameter. The ability to localize the drug and its metabolites in such a highly representative model system prior to pre-clinical trials facilitates an increasingly tailored downstream development, reducing the need for animals and lessening the financial strain that they contribute to drug discovery. The ongoing collaboration of academia in the University of Edinburgh and the corporation AstraZeneca enables this work to address current global scientific challenges, fulfilling the 3Rs legislation and has the long-term potential to revolutionize drug discovery.