Each year SCI’s Scotland group a runs competition where students are invited to write a short article describing how their PhD research relates to SCI’s strapline: where science meets business.

Maithili Shroff (right), a PhD student at the University of Dundee, is one of this year’s four winners. Her article ‘Guardians of our genome – exploring the potential of DNA nucleases’ is reproduced here:

Guardians of our genome – exploring the potential of DNA nucleases

One in two people will develop cancer at some point during their lifetime, according to Cancer Research UK.

Frighteningly, the incidence of genetic diseases, such as cancer, diabetes, and cystic fibrosis, is on the rise. Many different factors contribute towards the risk of acquiring these disorders – inherited genes, exposure to chemicals from the environment and lifestyle habits to name a few.

Scientists have estimated that, on average, DNA is attacked more than 100,000 times every day in each cell. However, cells have evolved to be resilient to such assaults by employing a large number of proteins dedicated to repairing the abnormal DNA and correcting these mistakes. DNA nucleases are one such group of proteins and are the focus of my research. Nucleases function like molecular scissors and cut out specific fragments of DNA or RNA, making them useful in various biological processes such as DNA replication, repair, recombination, RNA maturation, and cell death. Advances in bioinformatics have uncovered many new nucleases that have been found to be associated with various different types of cancers as well as other diseases such as anaemia. However, not much is known about many of these novel molecular machines at present.

I’m currently working on understanding where, when, and how some of these nucleases function in the vast and complex cellular framework. This involves investigating how nucleases are regulated, the proteins they interact with, the structures they ‘cut’, and whether the absence of a particular nuclease leads to instability in the cellular genome. As part of my research, I have used microscopy-based experiments, such as laser micro-irradiation assays, to visualise the recruitment of particular nucleases to sites of DNA damage. This powerful method can be used to investigate in real-time whether any specific protein assembles around the damaged DNA, implying that it is involved in the response to DNA damage. This also creates an intersection where my scientific research approaches business avenues, as it offers the prospect of developing a screening service to identify novel targets in the DNA damage response (DDR) pathways, through collaborations with leading investigators in the field. 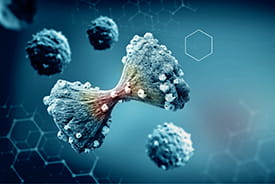 While the DNA repair mechanisms are designed to protect the genetic blueprint, the same repair mechanisms are detrimental when adapted to give pre-cancerous cells a selective advantage in propagating themselves. Identifying novel targets in the DDR pathway will facilitate new ways of disrupting the way cancer cells repair their DNA. By blocking these repair processes, the specific growth advantage of cancer cells is lost and they become highly susceptible to being selectively eradicated through a concept known as synthetic lethality. Therefore, developing drugs that specifically target proteins in the DDR pathway will provide more effective and specialised therapies in treating specific cancer subtypes.

In this context, the microscopy-based screening service can be adapted for multiple applications. It can be used to screen for novel targets in the DDR pathways, to test the efficacy of newly developed drugs that prevent the recruitment of specific proteins to the damaged DNA and contribute to a database of proteins involved in the DDR pathway so providing a repository of potential drug targets. This could help establish a pipeline to provide a route to translate novel discoveries through drug development and finally to commercial realisation, increasing the portfolio of medicines available to meet the demands of the market.

Cancer cells are constantly evolving and adapting to existing treatments by compromising their inherent repair mechanisms. Technological advancements and better diagnostics coupled with rigorous research into understanding the heterogeneous nature of the disease will enable more accurate and personalised treatments to be offered. Such treatments provide novel opportunities in disease management and intervention and hold the key to stopping the detrimental progression of cancer.