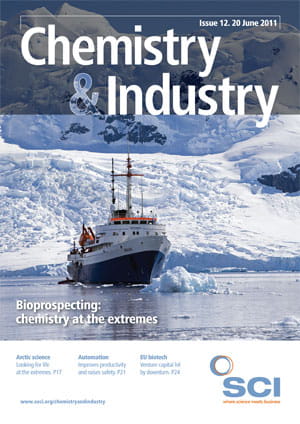 Rubbery plastics are ubiquitous in consumer goods, but they are vulnerable to cuts and scratches. Damaged plastics are usually thrown away, adding to the already overburdened landfill sites. Healable or self-healing polymers offer an environmentally friendly alternative and extend the lifespan of these materials. Over the past five years, there’s been an increasing interest in these polymers. Research groups around the world have devised supramolecular polymers that can de-polymerise and then re-polymerise, and microcapsules that release materials to fill in the cracks.

Earlier this year, a polymer-based material that can heal itself when placed under ultraviolet light for less than a minute was reported (Nature, doi:10.1038/nature09963). Unlike conventional polymers, which consist of long, chain-like molecules with thousands of atoms, these materials – metallosupramolecular polymers – are composed of smaller molecules, which are assembled into longer chains using metal ions as a ‘molecular glue’. Ultraviolet light temporarily unglues the metal bonds and the solid polymer begins to flow easily. Flick the uv switch off and the polymer re-assembles and solidifies. These supramolecular polymers are mainly of interest in the paints and coatings applications. ‘The materials were primarily designed to prove the concept, not for a specific application. The idea now would be to target a specific coatings application and devise a material with the desired properties for that application,’ explains Stuart Rowan, coauthor and professor of macromolecular engineering and science at Case Western Reserve University in Cleveland, US.

‘One way to access self-healing (or rehealable) materials is to use a reversible bond,’ says Rowan. ‘In our case, we used metal–ligand interactions, but other non-covalent interactions, such a hydrogen bonding or π–π stacking, have been used too. In addition, dynamic or reversible covalent bonds can also be used.’ The use of photochemical energy is particularly appealing for repairing coatings because the radiation is required to penetrate only a short distance into the thin film and can be targeted to damaged sites.

In an earlier paper, a rubber synthesised by Ludwik Leibler and colleagues at CNRS, the French National Centre for Scientific Research in Paris, when cut, self-healed at room temperatures when the ends were brought together (Nature 2008, 451, 977). The key here was a supramolecular network that exhibited partial cross-linking through hydrogen bonds. Once fractured, the active ends of the hydrogen-bonded network are exposed and reform when brought together again. The French chemicals company Arkema is currently looking to develop and commercialise these polymers. Other self-healing hydrogen bonded polymers, developed by Bert Meijer and his colleagues at Eindhoven University of Technology in the Netherlands, are being commercialised through the Dutch company Suprapolix (www.suprapolix.com).

While metals flow easily when molten, polymers are generally very viscous in the melt, which makes it difficult to force them into very fine holes or between fibres. Being able to process a polymer in a state of low molecular weight and then have it revert to high molecular weight is a major target of polymer research since this would greatly simplify both the fabrication of microscale polymer components and the production of high performance composite materials based on carbon fibres. This is effectively what is now being achieved with healable polymers, said Howard Colquhoun, chair of materials chemistry at the University of Reading, UK.

Colquhoun’s group focuses on π–π stacking interactions between polymers, where an electronrich aromatic system on one end of a polymer chain binds to an electron-poor aromatic system within, or on the end of, another polymer chain. ‘They tend to get together and bind through various electronic processes, the theories of which are not yet fully defined but the fact is that electron rich and electron poor aromatic molecules tend to get together and stack,’ Colquhoun explains.

Above a certain temperature these weak interactions begin to break off; at room temperature, they are strong enough to give relatively good mechanical properties for sealant applications but are not seriously load-bearing materials. ‘The materials we’ve been working with are mostly elastomers, rubbery type materials,’ admits Colquhoun, but this is true for all these supramolecules.

‘At the moment most supramolecular rehealable polymers are soft rubbers or elastomers, so you end up with a soft elastomer once you heal. This is fine if you want a soft elastomer but for many applications you want a stronger material,’ explains Rowan. ‘Generally with the reversible bond-based materials, a stimulus needs to be used to heal the material, which makes them more akin to rehealable materials rather than self-healing,’ he adds.

Some polymers can heal without any external intervention, such as light or heat. Nancy Sottos, Scott White and Jeffrey Moore at the University of Illinois at Urbana-Champaign, US, developed self-healing structural composite materials by embedding a microencapsulated healing agent and a catalytic polymerisation initiator in a polymer matrix. Damage in the form of a crack or tear triggers self-healing – the embedded microcapsule is ruptured and the healing agent is released into the cracks through capillary action. The healing agent meets the initiator and the crack faces bond. These materials were recently considered by NASA for use in inflatable, deployable housing structures for lunar operations (Acta Astronautica, 68, 883).

Back on Earth, aluminium frames are giving way to light carbon fibre-reinforced polymer composites in aircraft. A downside of these composites is an inherent brittleness. The laminated structures tend to delaminate under certain load conditions and they are particularly susceptible to impact. Often the damage may not be perceptible externally, which is a big worry in aerospace.

‘We came up with some ideas of incorporating hollow fibres, filled with liquid resin, in these structures,’ says Ian Bond of Bristol University, UK. On impact, the hollow fibres break and the resin bleeds out into the damaged zone, re-bonding the delaminated faces back together. Bond’s group looked at a two-part epoxy system, but this relies on a certain stoichiometric mix to work. ‘We’ve looked at using a catalyst, a Lewis acid,’ said Bond. ‘It’s a solid material so you can disperse it either in the matrix or you can coat the outside of the hollow fibres or microcapsules.’

In the composite approach, these materials can be considered as self-healing, although often the material that fills and heals the crack is not the same as the original matrix polymer so there is a difference in properties between original and healed material.

Apart from the brittleness of carbon fibre composites currently being used in aircraft and cars, Colquhoun explains these are more difficult to process than metals and also more difficult to repair because of the complexity of the structures involved. ‘Because conventional epoxy-based systems are highly crosslinked polymers, they can’t actually be healed thermally, the section has to be taken out and replaced,’ says Colquhoun. ‘That is a really significant issue in the aerospace and automotive industries. They need a material that has the strength, toughness and high-temperature resistance of the current carbon fibre matrix but can be repaired in-situ without having to take it out and replace it,’ he says.

Bond acknowledges the sheer scale of the high-value products in aerospace components means that cost is going to be an issue. ‘We’re not necessarily advocating that you would put self-healing on every component everywhere in a structure. You would build it in where you know you have damage threats,’ he says.

Bond believes that self-healing polymers for aerospace parts could be within reach in 5 to 10 years, but it will depend on investment levels. ‘The other issue,’ he explains, ‘is certification.’ Blaiszik echoes the sentiment, ‘To get a new composite tested and up to grade so as to be part of an aeroplane is an arduous 10–15-year process’, he says.

Bond’s group is also investigating the possibility of using self-healing polymers in wind turbines – when these are moved off-shore their maintenance gets complicated – and in bridges. ‘Civil infrastructure may be an easier target’, says Bond, ‘because it’s general not highly loaded and doesn’t have to recover properties instantaneously. Structural failure would not prove catastrophic.’

Batteries – the next frontier

During charge and discharge cycles in high-capacity silicon anodes, there can be volume changes of up to 400% and this quickly leads to fracture and failure of the electrode material. To make the next generation of electrode materials robust enough for long-term use will require clever engineering. And here lies the potential for the inclusion of self-repair functionality.

In an effort funded by the US Department of Energy, White and his colleagues are investigating features such as autonomic shutdown, selfhealing battery performance and greatly extended lifetimes. They are experimenting with various microencapsulated systems to test their effectiveness at restoring conductivity and improving safety. The researchers have shown conductivity restoration in systems using encapsulated carbon nanotubes, silver binders, graphite particles and liquid metals. At the core of the liquid microcapulses is a liquid gallium–indium alloy with a polymer surface. The liquid metal has reportedly shown the most promise with conductivity restored within 40 microseconds of capsule rupture.

‘These are the only people I know who are looking outside structural properties and I think we are missing a trick by not doing that,’ concludes Bond. ‘There is a lot of other “healing” that could be made use of.’

The 3rd international conference on self-healing materials will be held 27–29 June 2011 in Bath, UK.

Anthony King is a freelance writer based in Dublin, Ireland.