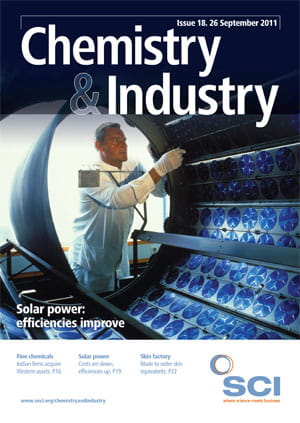 The sudden flood of acquisitions between about 2005 and 2008 was, he says, a kind of herd instinct. ‘The same thing happened with European companies in the 1990s, which thought they needed to buy US fine chemical companies,’ he notes. ‘Most major European fine chemical companies bought one in the US as they wanted to get close to the customer, and in most cases these failed to work out.’

One of the first to get in on the act was Dishman, an outsourcing company focusing on the development and scale-up of actives for the pharmaceutical industry. Dishman made four acquisitions of varying size. In 2005, it bought UK-based Synprotec, a small specialist in scaling up projects, for about $4m. The next year, it acquired two Swiss companies, Carbogen Amcis for $75m and the much smaller iO3 for $1.5m. The following year, it purchased Solvay Vitamins in the Netherlands.

According to Synprotec’s former ceo Peter Nightingale, now based in New Jersey, US, while the non-Swiss businesses seem to be doing reasonably well, the acquisitions in Switzerland are struggling. ‘Dishman paid top dollar for Carbogen Amcis when they bought it from Solutia,’ he says. ‘The market was in very good shape at that point, and credit was readily available. Carbogen Amcis was, and is, a good company, but the acquisition was at the top of the market, and suddenly the market imploded. Much of its focus was on research -based and biotech companies, but the industry went back into its shell because of the financial situation. Then, to add to the problems, the Swiss franc has gone through the roof.’

Other large acquisitions have faltered, too. Pharmaceuticals company Piramal bought Avecia in the UK for a nominal cost and took over its substantial pension liabilities in 2005, but the main site in Huddersfield closed down in 2009 after failing to make money. The plant in Grangemouth, which has more of a biotech focus, is doing better. Similarly, Shasun’s acquisition of ChiRex from Rhodia after it exited fine chemicals in 2006, again for a nominal cost, has met with mixed fortunes. Although the Dudley facility is still in business and is now growing, its Annan site closed in 2009.

‘The deals that have been more successful, like Piramal in Grangemouth, are slightly different to the conventional fine chemicals “pots and pans” business, and offer something more than simple manufacturing capacity,’ Nightingale says. Another Piramal acquisition, Pfizer’s active phamaceutical ingredients (APIs) and formulation site in Morpeth, UK, also seems to be doing OK, he adds. Although about 20% of the 350 or so employees were made redundant the year after its 2006 acquisition, in 2009 Pfizer increased contract manufacturing deals there.

Similarly, the US sterile injectables manufacturer Hollister is still in business after its 2007 acquisition by Jubilant. And Chirotech, bought from Dow by Dr Reddy in 2008, has recently expanded its labs in Cambridge, UK. Outside the pharma sector, Vivimed’s acquisition of colour chemistry specialist James Robinson in Huddersfield has also been positive. Here, the R&D skills of the UK-based chemistry team are now allied to low-cost large-scale production in India, giving it the best of both worlds.

But why have the acquisitions largely been unsuccessful? Pollak believes that, fundamentally, the reason is that they simply didn’t make much sense. ‘The big advantage of Indian manufacturers is that they have a low-cost base,’ he says. ‘Why should they buy a company in a high-cost country that makes their competitive advantage obsolete? And then they probably did not have the experience to run an international company, and there is some resistance in the western companies to having an Indian boss, partly because of the culture difference.’

However, according to Nightingale, it does make sense for the Indian companies to have a western presence. ‘In principle, if you could combine western project management skills with Indian manufacturing capabilities, where there are many good chemists and engineering skills, that would be positive.’ The advantage of India, he explains, is that it is a low-cost base with good scientists and engineers. What they should, perhaps, have done instead was go for the smaller development base acquisitions in the west, rather than the big manufacturing assets. This would have given them the contacts they desired, plus maybe a pilot plant or kilo lab capability.

So are the large acquired sites that are still up and running more likely to succeed, or is it simply that they have not closed yet? ‘I think it’s the latter – they’ve not closed yet,’ Pollak says. The ones that have been more successful are those where the acquisition was not based largely on manufacturing capacity, but were more technology-based, offering services such as development. But Pollak still thinks there won’t be a further rush of acquisitions. ‘My gut feeling is that they have learnt their lesson,’ he says. ‘The wave of acquisitions is slowing down, in exactly the same way as happened with the European companies acquiring chemical companies any more – quite apart from the fact that there are not many left!’

Conversely, there has been little expansion of western companies into India recently, despite the tradition of western companies setting up operations there. For example, many years ago, companies such as Germany’s Hoechst and Ciba Geigy from Switzerland built plants in India. But, as Pollak explains: ‘Recently, this has not happened so frequently because the market capitalisation of Indian companies has become very high, so there is a very high price to pay to buy a company in India.’ Building a new factory in India is also a challenge. ‘While the Indians, along with the Chinese, have set up special economic zones where they encourage investment by western companies, on the other hand when a product becomes reality it is very difficult for a western entrepreneur to get along with the bureaucracy,' says Pollak.

The Indian companies are also facing a big change in their home market, Pollak says. While until now they have focused on trying to increase their exports, the domestic population is getting richer and can afford western medicines. Consequently, there is an increasing demand for fine chemicals made domestically for customers within India. ‘This is a big change that will come about in the next few years, and the internal market will grow,’ he says. ‘There is no chance for western companies to compete here by exporting to India, with production being more expensive in Europe and the US, and the family ties that often exist between the various Indian companies.’

Despite the setbacks in Europe, Pollak believes that Indian companies will continue to grow at a very rapid rate, between 10 and maybe 25%/ year. ‘This is partly because they are getting more business from western companies, and partly because of this rise in domestic demand,’ he says. Some people say that salaries are going up sharply in India and in a few years many will have the same salaries as western operators. ‘This is by no means the case’, says Pollak. ‘Today, the salary of an operator in India is one-tenth of the salary of one in the west. To go from one-tenth to equal will take more than a few years. While the labour productivity is lower there, that will also catch up, so while salaries will go up a bit, productivity will also rise. Overall, they will stay competitive.’

Another area of business where the Indian producers will continue to profit – and expand – is generics, Nightingale believes. ‘These products are becoming ever more important in western markets, as products go off-patent and the cost of new drugs is rising – and fewer new ones are reaching the market anyway,’ he says. In 10 years, companies in a position to make generic APIs, particularly those with advanced process development skills, look set to benefit.

Another area where there is a real opportunity for Indian companies is in biosimilars. The first of these ‘generic’ forms of biologic medicines – drugs where the active ingredients are large molecules such as proteins – have already been available in Europe for a few years, with Sandoz making real inroads into the market. The US FDA has been more reluctant to approve them, but it is surely only a matter of time before financial pressures and loss of patents will lead to the go-ahead being given to biosimilars. ‘Indian companies are already developing the capability to produce biosimilars and unfortunately for western companies, they cannot hope to have this field reserved for them as the Indians are already preparing to attack this category of product when the US finally decides to allow them,’ Pollak says.

Nightingale believes that rather than just focusing its sights on its western rivals, Indian companies should be setting up joint ventures with Chinese manufacturers. ‘Although at the moment Chinese companies are ahead of their Indian counterparts in terms of basic intermediates and chemicals, they are behind in advanced intermediates and APIs,’ he says. ‘They worry that China will catch up. What they should be doing is looking to strike up relationships with Chinese suppliers – real partnerships rather than just buying raw materials from China. I see a really productive future for Indian companies if they can make meaningful alliances with companies in China. But what will become of their western operations remains to be seen.’

CiVentiChem – exploiting the best of both worlds

CiVentiChem, based in Research Triangle Park (RTP) in North Carolina, US, was set up from the outset to take advantage of the best attributes of both western and Indian companies – western project management and research skills, and Indian production and engineering values.

Founded by two Indian-born, US-educated chemists in 1994, the idea was to take on small-scale synthetic outsourcing activities in the US and Europe. ‘We have a small US operation and a big Indian operation,’ explains its director of business development, Glenn Killingworth. Project management is done at the US global headquarters, where intellectual property is controlled, and there is also a small team of chemists. A further 65 work in the plant in Hyderabad.

‘The RTP site is a “window”, and customers tend to speak to management and chemists here, rather than in India,’ he says. ‘We mostly provide custom synthesis activities. Our ideal project would be a mixed model, where we might have a couple of chemists working on a project in the US, and perhaps a dozen more working on the same problem in India. Small-scale work is done in both locations, but process development and large-scale manufacture is carried out in India.’

Currently, the company manufactures commercial-scale intermediates, plus some non-GMP APIs on a small scale for research purposes. However, it is now building lab-scale GMP capacity in the US, with the aim of adding a GMP facility in India in due course. ‘This type of growth is typical of the way the company has grown over the past 17 years – steady organic growth,’ he says. ‘This cautious approach has led to a sustainable business – not putting in capacity for which there is neither demand nor capability

Sarah Houlton is a freelance science writer based in Cambridge, Massachusetts, US.