Imagine a drug that is equally effective against bacteria, viruses and fungi; that does not suffer from drug resistance; and which can be targeted locally, thus avoiding the side effects associated with conventional antimicrobials. Such a drug would presumably be snapped up by the pharmaceutical industry and health providers alike.

In fact, such a class of drugs is available. Photoantimicrobial agents are photosensitisers – chemicals that absorb radiation and then use it to cause chemical reactions, usually accompanied by the production of reactive oxygen species (ROS), such as the hydroxyl radical, superoxide anion and singlet oxygen. In bacterial cells, for example, this may result in oxidative damage to the cell wall, DNA, ribosomes and enzymes. Since ROS are oxidants, they are non-specific in their activity at these sites, which guarantees activity, and means that it is most unlikely that resistance could evolve.

Although this photoantimicrobial effect has been known of since the early 1900s, and there were scattered publications from the late 1920s covering its use against bacteria, viruses, fungi and protozoa during the last century, there was no breakthrough into the clinic. Not surprising perhaps since this was the ‘antibiotic era’, so a more complicated, light-activated technology received little attention. However, since the end of the last century there has been something of a renaissance in photoantimicrobial research in universities, driven in the main by the growing resistance of bacteria to antibiotics.

Early interest focused on the phenothiazinium salt, methylene blue, owing to its wide ranging activity profile in vitro. First reported by Heinrich Caro of BASF in Germany in 1876 and used as a biological staining material, methylene blue has since been used to treat diseases ranging from malaria to tuberculosis and cancer.1 Methylene blue is currently licensed in several countries for photodisinfection in dentistry applications and is in clinical trials for nasal photodecolonisation of methicillin-resistant Staphylococcus aureus (MRSA) carriers, mainly because it is non-toxic to humans, rather than for its photosensitising capabilities. 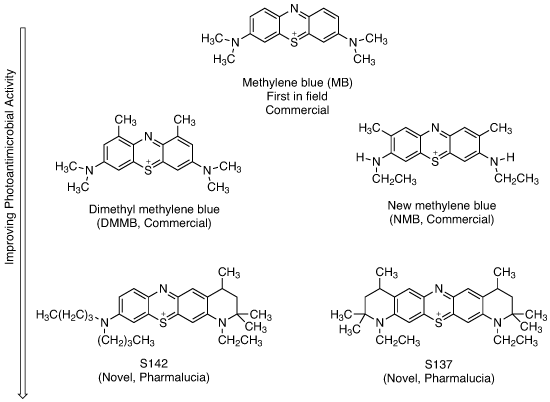 In the past 20 years, many more (>100) active methylene blue derivatives (MBDs) have been synthesised (see structures above). The systematic testing of these derivatives, which has been done by academics rather than by industry, has revealed that, at least in vitro, methylene blue is not the best performing photoantimicrobial (see graph below). Certainly it will kill resistant bacteria such as MRSA, but other derivatives do the same at a fraction of the dose. None of these MBDs has reached clinical approval – only one, produced by the academic spin-out Photopharmica, has been clinically trialled in the past 25 years; this is despite the available data demonstrating the often outstanding activities of these potential agents. 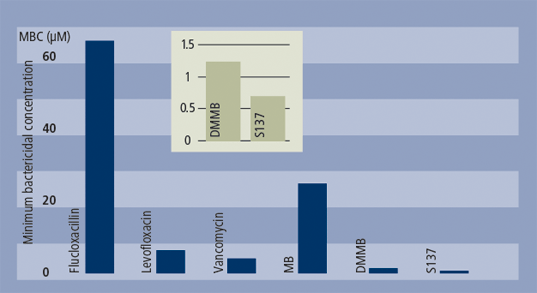 In any conventional clinical area, the evidence of effective first-in-field drug action would normally promote significant research activity in that sector of the pharmaceutical industry. In addition, for photoantimicrobials based on methylene blue, there is a considerable therapeutic market range, which includes skin and soft tissue, oral, ophthalmic, respiratory, gastrointestinal and urinary and reproductive tracts. Incredibly, neither big nor small pharma have any involvement with university research groups/spin-outs in any of these areas.

The reason, presumably, is that, because photoantimicrobials require light activation they don’t fit the standard pharmaceutical paradigm. On the other hand, psoralens – pharmaceutical products – and ultraviolet light have been used routinely in dermatology departments worldwide for many years to treat psoriasis, vitiligo and other skin disorders. Where is the difference in principle? Admittedly, treating a chest infection photodynamically is a more involved process than simply administering oral or intraveneous antibiotics, but evidence points to more rapid, positive results with photoantimicrobials.

The current global economic climate doesn’t help, but there is a greater imperative involved here. The spectre of multiply-resistant bacteria looms large across the healthcare sector, whether in hospitals, care facilities or, increasingly, in the wider community. There is little point to the systemic administration of antibacterials for resistant infectious disease. No resistance has yet been demonstrated with the use of photoantimicrobials. Consequently, they could be used to good effect for localised infections, thus conserving and extending the useful lifetimes of antibiotics for more serious systematic disease.

There are additional problems facing those involved in 21st century infection control. ‘Old’ diseases, such as tuberculosis, are on the increase again in the affluent, industrialised world, and there is a much greater threat from drug-resistant bacteria and the rapid diffusion of infectious disease as a consequence of globalisation. There is also increasing incidence of infection outbreaks in hospitals that are remote from the original pathogenic source.

Such cases have occurred both in the UK and the US, for example, with the Gram-negative bacterium Acinetobacter baumannii. While these are hospital-associated infections (HAI), in some cases, the bacterium was brought in with injured military personnel from Iraq or Afghanistan.2 A. baumannii is inherently difficult to kill with standard antibiotics and its drug-resistance profile has been increasing in the recent past. It is, however, susceptible to photodynamic treatment with methylene blue.

Activity against ‘emerging’ infectious agents, such as A. baumannii, is thus another attractive facet of photoantimicrobials, not only from the military viewpoint, but also for healthcare in developing countries where rapid typing of infecting organisms may not be possible.

Similarly, the upsurge in HAIs due to other resistant Gram-negative bacteria, such as Escherichia coli and Pseudomonas aeruginosa, is of growing concern. Extended-spectrum β-lactamases (ESBLs) are a rapidly evolving group of bacterial enzymes, which are capable of destroying the now widely used penicillin/ cephalosporin/carbapenem drugs. However, these enzymes have no effect on photoantimicrobials or on the reactive oxygen species produced on illumination.

It is not possible to illuminate the entire the human body, so systemic infection by bacteria, for example, septicaemia, would not benefit from the use of photoantimicrobials. Endoscopic photosensitiser/light delivery is, however, a potential way forward both for more localised recalcitrant or resistant internal infection, as well as for less severe cases in order to decrease conventional antibacterial usage. Topical skin and soft tissue use remains an obvious application.

Additionally, cationic (positively-charged) photoantimicrobials of the methylene blue class are truly antimicrobial (see Table above). Perhaps, again, this is a problem for pharmas – how might something like this be marketed?

Ironically, one of the reasons for increases in bacterial drug resistance is antibacterial administration where the infection, often local, has a viral cause. Local phototreatment in such cases offers activity against both bacteria and viruses.

Should the pharmas require further evidence to invest in photoantimicrobials, it is worth pointing out that methylene blue is in current use as a photoantimicrobial in Brazil, where it has been used successfully against local bacterial, viral and fungal infections. Perhaps more surprisingly, a semi-synthetic porphyrin derivative is being used in Russia to treat serious chest infections, including tuberculosis.

The decline in new antibacterial drugs introduced into the clinic in the past five years reflects a retreat from research in the pharmaceutical industry in this area. Conversely, the incidence of drug resistance continues to increase. Since the applications of photoantimicrobials, by definition, are far wider than any single class of conventional drug, the potential impacts could be immense and far-reaching. However, without the involvement of the pharmaceutical industry they will remain just that: potential.

Mark Wainwright is professor of chemotherapy in the school of pharmacy & biomolecular sciences at Liverpool John Moores University, Liverpool, UK.