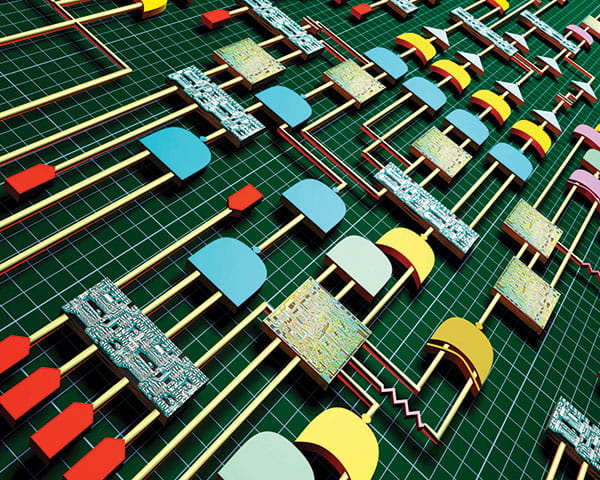 In the quest to understand life, genes led the race in the late 20th century, from Richard Dawkins’ bestseller The Selfish Gene through to the completion of the Human Genome Project. After the genome was successfully sequenced, thousands of others rapidly followed and enabled many kinds of in-depths studies and comparisons. But soon it became clear that there were fewer genes than expected, and they did not hold straightforward answers to the big questions in medicine.

Instead, the new science of systems biology began to reveal a different view of life. In the 21st century, scientists realised that it’s not the cells, or the metabolism, or the genes, that are important, but the complex regulatory network that links them all together. This complexity of living systems comes from the way that genes all talk to each other in a well-programmed way.

Thinking of a network where many components are communicating with each other reminds us of a computer. In fact, concepts from electronics have become increasingly useful in the description of the functions of the cell, and in attempts to re-design some of its functions. Thus, several research groups have recently succeeded in introducing new switches into cells, or even simple circuits linking several elements. In 2010, for example, Jeff Hasty and colleagues at the University of California at San Diego introduced a positive and a negative feedback loop, which combined to produce a stable oscillation, into the bacterium Escherichia coli.1 Using Green Fluorescent Protein (GFP), this resulted in all the bacteria in a culture dish flashing green light at a coordinated frequency that the researchers could control by adjusting the concentrations of the molecules involved.

So far, however, the products produced by biotechnology are all based on very simple chemistry, says Chris Voigt from Massachusetts Institute of Technology (MIT) explains in a video about his work (https://youtu.be/lNttxYdGHs4). ‘What we want to be able to do is fully unleash the potential of biology and there are all sorts of things that biology can do that we don’t know how to access yet,’ Voigt says.  Essential biological functions like that of our liver or nitrogen fixation at ambient temperature are still out of the reach of our technology.

These complex functions, Voigt argues, require interactions between hundreds of biological components. However, efforts to implement artificial circuits have so far been limited to single figure numbers of functional elements, requiring considerable amounts of work to design and build - without producing unwanted side effects in the cell.

To reach the levels of complexity in living systems, Voigt’s team has developed genetic switches for artificial in-cell networks. Instead of stitching them together manually, he created artificial cellular circuits that are compatible with computer logic, based on so-called NOR gates. Theorists have proven that this type of gate is ‘Boolean complete’, meaning that all kinds of computation can be carried out provided there are enough NOR gates. The primitive computer used to guide Apollo 11 to the moon, for instance, was entirely based on triple-input NOR gates, 5600 of them.

To create biological NOR gates, the researchers used an existing NOT gate - which converts an on-signal into an off-signal and vice versa - based on a DNA sequence including a ‘promoter’ region upstream of the gene coding for the output signal. The computational logic of the NOT, turning a state into its opposite, is represented by the gene repressor, a protein molecule that binds to the promoter and blocks the readout of the gene. Thus, when the molecular signal comes in, it binds to promoter sequence, and thereby turns the gene off.

Adding a second promoter sequence upstream of the gene creates the NOR logic. If neither of the promoters receives its specific repressor molecule, the gene expression is on. If either or both are repressed, it is off. The gene itself can code for another repressor, such that its output feeds into the next gate. Alternatively, it could code for a final output signal that triggers a biological function or a signal to be detected by the experimenter.

A fundamental difference between the cell and the silicon chip in a computer is that on the chip every electronic element can be identified by its location, which remains fixed. In the cell, by contrast, everything moves around; molecular circuits must be distinguished by molecular recognition rather than location. Therefore each repressor-promoter pairing had to be different and free from cross-talk with other pairs. Initially, Voigt’s group created a library of 16 such pairs to develop their gates and circuits.2

Then came the question of how to create more complex systems. Together with computer scientist Douglas Densmore from Boston University, they developed a compiler based on the hardware-independent language Verilog, which has been used since the 1980s to design computer chips. Verilog enables programmers to express their requirements in a formalised way, independently of what the hardware was made of – even, as in Voigt’s research, from DNA.

This compiler, which they called Cello - for cellular logic - is available online at  www.cellocad.org. Anybody who wants to build a cellular computer using Varilog can input their requirements and the site will convert them to a DNA sequence. The user can then get that sequence synthesised and introduce it into bacteria. However, there is no guarantee that it will work. Of the first 60 circuits designed in Voigt’s lab using the automated method, 45 performed flawlessly. For the others, the researchers were able to find the faults and debug the circuits.

As DNA is the storage medium for genetic information, it is only logical to think of using it as a memory in cellular computation. However, the cell doesn’t normally write its memories of past experiences in DNA code. If at all, it saves them in modifications in the apparatus around the DNA including DNA methylation and histone proteins. These changes not in but ‘on’ the genes, which may be transmissible over a few generations, are the subject of the rapidly growing research field of epigenetics.

Evidence from another ‘hot topic’ of recent years provides an exceptional case, however, where memories are indeed encoded in DNA. The Crispr-Cas system, recently developed as a tool for subtle and versatile gene editing, serves an immune function in bacteria.3 It keeps DNA snippets of viruses that the bacteria have been exposed to in the past for reference and rapid response to renewed infection.

While molecular biologists rapidly took up the use of the Crispr system for everything from molecular medicine to agriculture, the group of George Church at Harvard thought of something closer to its original purpose, namely to save information in bacterial DNA. The researchers tricked the Crispr-Cas system in E. coli into accepting a synthetic DNA as a target, and then used directed evolution to manipulate and study this bacterial recording device.4

Meanwhile, the group of Timothy Lu at MIT used DNA editing enzymes known as recombinases to create a cellular state machine. These enzymes can be switched between two modes such that they either excise a targeted DNA sequence from a genome or insert novel genetic material it into it. With these, the MIT researchers created so-called state systems in E. coli cells, with combinations of two or three different inputs leading to the recording of up to 16 different states, which could then be read out by DNA sequencing.5

When artificial cellular circuits can learn things, they may also become useful in developing artificial intelligence (AI). In a recent research article, Darren Nesbeth, a synthetic biologist from University College London, and colleagues outlined concepts to show how cellular circuits could adopt machine learning and in time develop a biological variant of AI.6

Voigt, meanwhile, already has his sights set on some real-life applications. His team has recently reprogrammed Bacteroides bacteria that colonise the guts of mice and shown it is possible to connect specific changes in the diet to switches in bacterial metabolism functions controlled by artificial circuits - and hence what nutrients they make available to their hosts. As medical research is increasingly becoming aware of the importance of the human gut microbiota for metabolic disease, this new approach could conceivably lead to clinical trials fairly soon. In  their first paper using this approach, Voigt and colleagues have shown how gut microbes produce dipeptide as inhibitors for host enzymes.7

Similarly, Voigt’s team is also looking at manipulating bacteria associated with plants, adding a way of communicating environmental parameters to plants without having to manipulate the plant itself.  The approach could also help to establish the ability of nitrogen fixation in plants other than the leguminous family that already has root nodules with nitrogen-fixing symbionts. In experiments ultimately aiming to establish nitrogen fixation in plants, Voigt’s team has recently established crucial parts of this bacterial function in yeast.8

The researchers have also started to try their circuits in much more complex yeast cells where they could help control fermentation processes. This is a first step towards mammalian cells and possible medical applications. In medicine, a programmed cell could use the detection of known cancer markers as input for a simple decision-making progress which could then, if the criteria for a diagnosis are met, result in the production and release of a drug.

Beyond the immediate use in Voigt’s own lab, experts anticipate that the wide accessibility of genetic circuits will stimulate further progress. UCL’s Nesbeth comments: ‘Cello is a major step toward reducing the timescales between design and realisation of functioning synthetic gene networks. This can credibly accelerate progress in the field. This is particularly the case due to the source code being openly available to encourage further innovations to be contributed from the wider community.’