If there is one thing the various diverse ideas for the future of our cities have in common, it is they all draw inspiration from the natural world, Vanessa Zainzinger reports.

Buildings such as houses, schools and hospitals all rely on concrete, which has a carbon footprint accounting for 8% of the world’s carbon dioxide emissions, according to think tank Chatham House. Indeed, most of our ideas about buildings and architecture rely on inert materials – brick and stone and concrete.

Inside buildings, built-in microbial systems could provide power and transform domestic liquid wastes into clean water fit for reuse. This idea ‘ is about engaging with the world of microbes and weaning our domestic lives off fossil fuels,’ said Rachel Armstrong, a pioneer of living architecture and professor of experimental architecture at Newcastle University, UK, speaking at the virtual AAAS meeting in February 2021.

Since April 2016, Armstrong has been involved in the Living Architecture Project – a collaboration between the universities of Newcastle, the West of England and Trento (Italy), as well as the Spanish National Research Council in Madrid, LIQUIFER Systems Group in Vienna and EXPLORA in Venice. In 2019, the project received an EU Innovation Fund grant to change cultural responses to human waste and the presence of microbes in our homes. The Active Living Infrastructure: Controlled Environment (Alice) project has created a prototype of ‘living bricks’. The bricks contain microbes that can generate energy from waste, while also communicating with the people living in a building.

Armstrong describes the bricks as ‘communities within a microbial city’. Each brick contains a different type of bioreactor – such as a microbial fuel cell, an algae bioreactor, or a genetically modified bioprocessor – that provides the perfect environment for specific types of microbes.

And since each bioreactor performs a different task, a wall of living bricks can work together in harmony. The production of electricity within the microbial fuel cell, for example, can be boosted by oxygen from green algae in the photobioreactor system. These products can either be fed back into the household system or released as nutrient-rich streams back into the natural environment to increase soil fertility in our cities.

There are many possible applications of living architecture. One is replacing interior wall partitions in our bathrooms and kitchens with self-contained microbial ‘living walls’ that could transform liquid human waste – urine and grey water – into usable products such as electricity, biomass, oxygen and clean water. The latter would be recycled back into our toilets, sinks and showers to reduce overall household water consumption – effectively creating a type of ‘circular economy’ in our homes.

To evaluate how productive the microbes are, Alice uses biosensors that record data produced by microbial electrons. The system then fuses biological and digital technologies to converse with the microbes and see how ‘happy’ they are and whether they need to be fed or warmed to generate more bioelectricity. A digital overlay of the information, gathered from Alice’s conversations with the microbial life in each brick, is displayed back to the household using augmented reality.

‘We have to learn how to communicate with microbes,’ Armstrong says. ‘They may thrive or fail in the conditions we give them, so they need to be taken care of.’ During the pandemic, she says, the team’s thinking shifted to thinking of living architecture as a domestic, internal immune system, ‘using friendly microbial communities and making them visible.’ Rather than seeing microbes as ‘dirt’ to be eliminated by wipe-clean ceramics and household cleaning products, Living Architecture aims to reintroduce them back into our homes, buildings and cities.

European Green Cities is developing a plan for a fossil fuel-free city area with 2,000 housing units at Vinge in the municipality of Frederikssund, 40km north-west of Copenhagen, Denmark. The vision is to obtain 100% of the energy supply from renewable energy.

18
Storeys high. At 85.4m tall, the Mjøstårnet in Norway currently holds the record for the tallest timber building.

If there is one thing the range of ideas for our future cities have in common, it is they draw inspiration from the natural world. It makes sense, says Marc-Olivier Coppens, Director of the UCL-based Centre for Nature Inspired Engineering (CNIE). The structure of river networks has taught us lessons for designing transport networks, sea sponges and anemones have inspired air ventilation systems, the Eiffel Tower was designed based on the structure of the thigh bone. ‘Learning from nature is as old as humanity but I think this is a golden time for it,’ Coppens says.

At the CNIE, PhD students with degrees in architecture are diving into chemical engineering to learn how fundamental mechanisms of natural systems could be repurposed for reinventing, or ‘greening’, the built environment. Malica Schmidt at UCL, for example, is designing multifunctional coatings that absorb water without external energy input, but also have enhanced optical and antibacterial properties. They are inspired by dragonfly eyes and plant capillaries. Nina Jotanovic from UCL Bartlett is engineering biogenic veneers that could be ‘grown’ and replace the energy intensive processes for making conventional paints and coatings.

The core idea is to take inspiration from nature to engineer solutions that can be implemented widely, Coppens explains. ‘This must be underpinned by fundamental mechanisms rather than blind imitation as is too often the case in ‘biomimicry’,’ he says. ‘The application’s context is typically different from that in nature, which requires adaptations.’ Schmidt’s nature-inspired multifunctional surfaces are currently being tested as a way to reuse and recycle water and repel bacteria produced by astronauts’ ‘ indoor’ activities on the International Space Station (ISS).

Merely imitating nature would not be enough, says Coppens. ‘Cities are for people to live in and that comes with social constraints,’ he says. Our real success in making cities more sustainable will depend on linking nature, economics, social factors, behavioural science, policy and legislation.

Legislation, in particular, can present constraints to realising new, unconventional concepts in cities, Coppens says. ‘There is drive and political will, but one has to seek a common language. Chemical engineers have to explain that their solutions are economical and demonstrate the benefits, then work with stakeholders, including governments, to influence legislation.’

Those who try to bridge this gap see even relatively conventional projects come up against hurdles at the regulatory level. Peder Vejsig Pedersen is a senior advisor at European Green Cities (EGC), a network of cities, organisations, companies and consultants that connect sustainability projects with the contacts to make them happen. In Denmark, Pederson and his colleagues are working towards installing groundwater cooling systems that can lower CO2 emissions by 90%, compared with more conventional systems. But environmental authorities are reluctant to approve the use of groundwater – a valuable resource for many other purposes – for a novel project like this, Pedersen explains.

Despite these hurdles, the EGC has a list of successful projects under its belt. Among them is the Copenhagen International School, the largest building-integrated photovoltaic installation in Europe with 12,000 solar panels covering its facades from the first floor upwards – supplying almost half the school’s annual electricity consumption.

Currently, the EGC is developing a plan for a fossil fuel-free city area with 2000 housing units at Vinge in the municipality of Frederikssund, 40km north-west of Copenhagen in Denmark. The vision is to obtain 100% of the residential energy supply cost-effectively from renewable energy. In practice, this will mean using both wind power and photovoltaic panels as well as solar thermal collectors, supplying the main part of the energy needs together with a local biogas plant.

Pedersen sees urbanisation as an opportunity to implement projects like these. Newly built urban areas will be examples of sustainable living solutions long before timber skyscrapers pop up in European city centres. Gradually, however, our cities are becoming greener, with more trees being planted, and vertical gardens and local food being offered in supermarkets.

Now more than ever, there is a sense of urgency to transform concrete jungles into something more sustainable. ‘Going green is tricky but helping to make our cities greener is in everybody’s interest,’ says Coppens.

A skyscraper rises from the Barbican estate in central London. Its centre column stands 300m tall, framed by smaller towers that lean to it like saplings surrounding a giant Redwood tree. The tower looks unusually light and airy in the post-war concrete covered estate, and not just because of its glass facade. It is made from wood. 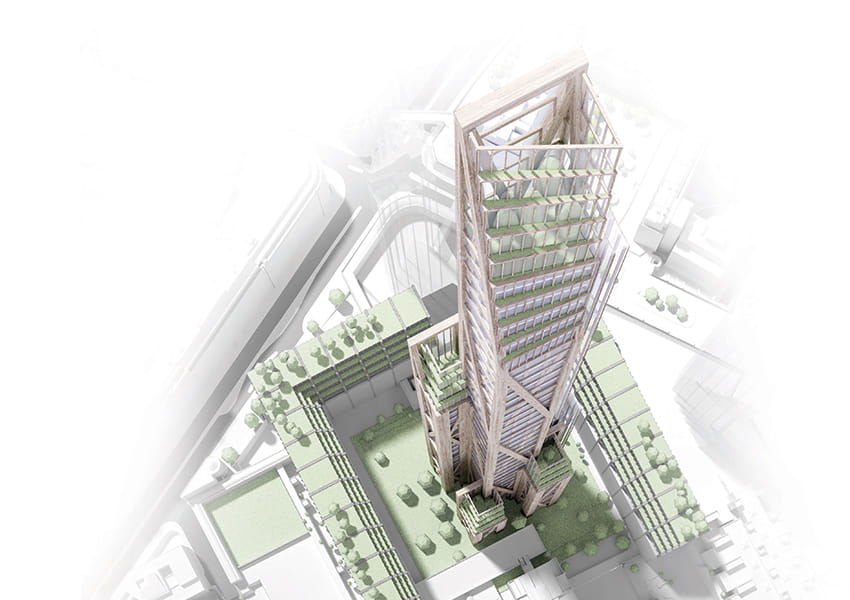 This wooden giant is only real on paper. Oakwood tower is a design research project, a skyscraper designed by academic scientists, practicing engineers and architects to help understand what a building of the future might look like. Michael Ramage, who worked on the tower with London-based firm PLP Architecture and engineers Smith and Wallwork, thinks the future of urban buildings lies in engineered timber. Ramage leads the Centre for Natural Material Innovation at Cambridge University, UK, and studies how biomaterials can replace artificial materials to ultimately reduce the built environment’s impact on the climate.

Cross-laminated timber (CLT), arguably the first major structural innovation since the advent of reinforced concrete, 150 years ago, is key to making wooden skyscrapers a reality (C&I, 2019, 83 (11), 22). CLT is made by gluing smaller pieces of wood together to create strong, uniform planks. Each layer of the engineered boards is usually oriented perpendicular to the adjacent layers, until the wood is strong enough to hold a tremendous amount of pressure.

Its chunkiness also makes the timber much more resistant to fire than the average plank of wood, said Ramage during a presentation at AAAS 2021. Yes, timber burns, Ramage acknowledged, but the wood most buildings were previously made of was smaller pieces that behaved not unlike kindling. Most CLT, however, reacts to fire with the resistance of the trunk of a tree, he pointed out.

To sceptics concerned about deforestation, Ramage argues we can make more out of the timber at our disposal without depleting earth’s natural resources and by managing forests sustainably. ‘Trees usually go to paper and other short-lived products,’ he says. ‘We can look at the changes we can make to ensure they go to much longer-lived products such as buildings.’ Much of the wood used to make CLT comes from the pine forests of northern Europe, Canada and the US, and Ramage highlights that as long as sustainably managed forests are used as a source, the trees are replenished much faster than their eventual occupants. Meanwhile, the biofuel for kiln-drying the wood – necessary so it doesn’t twist or rot – comes from the branches and sawdust not used in the building material itself.

If Oakwood is built, it will see CLT used at an unprecedented scale and dwarf the timber buildings currently in existence. At 85.4m tall and with 18 storeys, the Mjøstårnet in Norway currently holds the record for the tallest timber building. Completed in March 2019 it took its crown from the 53m Brock Commons Tallwood House in Vancouver, British Columbia, Canada.

As regards its sustainability credentials, timber rather than concrete can slash carbon dioxide emissions. Construction of Tallwood House, for example, is estimated to have avoided 2432t CO2 equivalents by using wood over other materials – equivalent to removing 511 vehicles off the road (thinkwood.com/projects/brock-commons-tallwood-house). Concrete is also about five times heavier than timber, which means costlier foundations and transport.