The 2014 Beilby Medal and Prize was presented to Prof Javier Pérez-Ramírez by Prof Bob Bradley, Chair of the Materials Chemistry Committee, at a ceremony on 17 March at SCI, London, where attendees enjoyed Prof Pérez-Ramírez presentation on his outstanding work of exceptional practical relevance in the field of Catalysis Engineering. It was an excellent talk that generated many opportunities for questions and discussion.

Javier Pérez-Ramírez FRS (Benidorm, Spain, 1974) has been Full Professor of Catalysis Engineering at ETH Zurich since 2010, and chairman of the Institute for Chemical and Bioengineering at the Department of Chemistry and Applied Biosciences in the period 2012-14.

He studied Chemical Engineering at the University of Alicante (1997) and earned his PhD at the Delft University of Technology (2002). Subsequently he worked for Norsk Hydro and Yara International (2002-05) and was appointed ICREA research professor at ICIQ (2005-09). 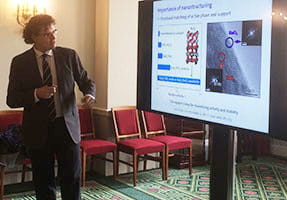 Prof Pérez-Ramírez's research tackles the major concerns facing today's society, such as the energy crisis and the need for environmental protection. His team focus on the fundamental design and technical development of new catalytic materials and reactor engineering concepts, favouring more efficient and sustainable manufacturing within the chemical industry.

He has published over 300 articles and is co-inventor of 13 patents, several of which are under industrial exploitation. His scientific contributions have been recognised by several awards, most recently the Otto-Roelen-Medal (2012) and the EFCATS Young Researcher Award (2013). He is Associate Editor of Catalysis Science and Technology, RSC's flagship catalysis journal.

The Beilby Medal and Prize which is jointly awarded by SCI, RSC and IOM3, is awarded annually to a scientist or engineer to recognise substantial work of exceptional practical significance in chemical engineering, applied materials science, energy efficiency, or a related field.

The RSC is responsible for coordinating nominations and selection of the Beilby award for 2015.