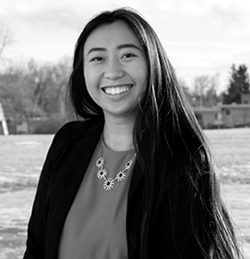 Laura Mah is a 2020 Canada Student Merit Award winner. She achieved this award for obtaining the highest standing of her class in the fourth and final year of her degree. Here is a brief biography of the winner.

Laura grew up in Calgary, Alberta and completed her BSc (First Class Honours) in biochemistry at the University of Calgary in 2020. She was on the Faculty of Science Dean’s List for her competitive GPA over the four years and received various scholarships, such as the Jason Lang Scholarship (2018-2019), University of Calgary Undergraduate Merit Award (2018), and President’s Admission Scholarship (2016) to name a few, due to her academic excellence.

Throughout her undergraduate degree, she had the pleasure of working on multiple independent research projects. She first studied with Dr. Dave Hansen, looking at the interactions between key regulatory proteins of stem cell proliferation in C. elegans after her second year funded by Alberta Innovates Summer Research Studentship. She continued to do her honours thesis exploring this topic further after her third year. Her continued love for research brought her to do two more independent research projects in her final year. One in Dr. Ebba Kurz’ lab, looking at interactions between key DNA repair proteins and topoisomerase II b, and another in Dr. Derrick Rancourt’s lab studying the reprogramming of mouse embryonic fibroblasts to induced pluripotent stem cells. In her fourth year, she had the pleasure of taking a cancer biology course that sparked her interest in the world of immunotherapies. This has now brought her to start her graduate studies in Dr. Douglas Mahoney’s lab where she is creating novel immunotherapies to treat pediatric cancers and hopes to have a career in this field.

Outside of classes, Laura worked as a server/bartender and volunteered in several associations on campus. In her spare time, she enjoys playing soccer, yoga, hiking and enjoying the outdoors. She also studied abroad in Greece after her second year and looks forward to traveling and experiencing many different cultures in the future.