Artem Pastukhov, a postgraduate student of the University of Refrigeration and Food Engineering, St Petersburg, Russia, was awarded the Seligman APV Fellowship in 2010 with the objective of investigating heat and mass transfer processes during the cooling of bakery products.

He used his visit to the UK to carry out experiments and develop a mathematical model, for four months from September 2010 at the School of Chemistry, Food Biosciences & Pharmacy, Department of Food Biosciences at the University of Reading, UK, under the supervision of Professor Keshavan Niranjan, Dept of Food Bioprocessing and at Campden BRI, CCFRA, Chipping Campden, UK, supervised by Dr Gary Tucker, Head of Baking and Cereals Processing Department.

Artem is the first Russian recipient of this award. His scientific interests include the thermo-dynamic processes of baking, baking science, food science, grain processing, cereal chemistry, the chemistry of life and public health.

Project objectives
The primary focus of this work was to study the effect of cooling conditions on heat and mass transfer in bread. The second aim was to study the influence of these conditions on product quality. A further aim was to develop a mathematical two-dimensional model using the thermo-physical properties of freshly-baked bread and heat and mass transfer by convection, radiation and evaporation, to predict mass loss and time of cooling, and to show the influence of each kinds of heat transfer on the duration of the cooling process.

Novel aspect(s) of research
Experiments were carried out with white pan bread, which was prepared from scratch based on the straight-dough bread-making method in a laboratory, and then cooled by natural and forced convections. The cooling was considered finished when the temperature at the loaf's geometrical centre reached 25°C.

During the experiments, temperature, weight loss, volume changes and local moisture content were measured to obtain data for the mathematical modelling of natural and forced cooling processes. A rectangular-shaped loaf measuring 100mm x 100mm x 300mm was chosen for the model development, based on Fourier's second law of heat transfer and Fick's second law of mass transfer. 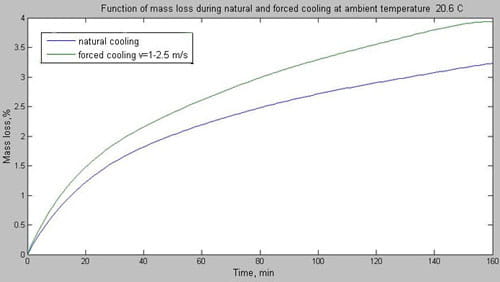 It was discovered that during the cooling process at low heat transfer coefficients the evaporation of moisture has a significant effect on the duration of cooling (40%).

At low heat transfer coefficients the moisture is evaporated during almost the entire process.

The coded model showed good correspondance with experimental data of the temperature changing during the cooling process.

Future work
Further development of the 2D model will consist of three parts. Firstly, improving the physical model of the thermal conductivity to take into account the coupled heat and mass transfer in the crumb, secondly developing a 3D model, and finally, creating software to predict the parameters of the bakery products cooling process.

During his fellowship Artem took part the SCI Members' Forum in London in late 2010 with his poster 'Effect of kneading speed on rheological properties of dough.'

He also attended SCI's 'Led by the Nose - Our Appreciation of Flavours and Fragrances' at the University of Reading.

Achievements of the Fellowship Being an ad hoc student of the University of Reading, Artem attended Academic English Writing course as a part of the In-sessional English Support Programme (IESP) and also received training in Organising Events, and received appropriate certificates of completion.

This fellowship allowed Artem to carry out experiments in modern research baking laboratories in Reading and Chipping Campden. Some results of this work were presented in the 5th European Workshop of Food Engineering and Technology's Presentations of selected national PhD students in Food Engineering and Technology at European level in Valencia, Spain, 22-23 March 2011 and in 'The 5th All-Russian conference of students and graduate students of Chemistry in the Modern World 'dedicated to the 300th anniversary of M V Lomonosov in St Petersburg, Russia from 18-22 April 2011.

Finally, two scientific papers were presented at the 6th Baltic Conference on Food Science and Technology 'Innovations for food science and production' FOODBALT-2011 in Jelgava, Latvia, and the 11th International Congress on Engineering and Food 'Food Process Engineering in a Changing World' ICEF11 in Athens, Greece, both in May, 2011.

During his fellowship Artem valued the opportunity to work among top-ranking scientists and to use modern laboratory equipment and techniques. All this allowed him to obtain high-quality experimental data and process it using appropriate mathematical methods.

Acknowledgements
Artem thanks SCI and the Seligman APV Trust for awarding him with the Seligman Fellowship, and expresses his special thanks to the following for for their help in carrying out the experimental part of his research:

Artem is grateful to the following for their support and care: