Large-scale wind turbine farms are becoming a permanent fixture in the future landscape of renewable energy. However, while wind is the current preferred choice for industrial applications of renewable energy, solar power offers many advantages to the consumer market, particularly the environmentally-conscious home-owner.

Unlike smaller wind turbines, solar panels are not as sensitive to their location and are low-maintenance, only requiring the infrequent clean to stop dirt from blocking sunlight from the panel’s photovoltaic (PV) cells. If more electricity is needed, panels are also easy to add to.

However, this last point may soon become arguable due to emerging technologies in PV cells. Research into the silicon cells and the burgeoning field of perovskites have shown increased capacity to generate electricity, creating some stiff competition for the wind turbine industry.

Silicon solar cells have long been the standard for the sector, with almost 90% of PV cells globally containing silicon. Scientists from the National Institute of Advanced Industrial Science and Technology, Japan, have presented scalable technology for silicon PV cells that can be used commercially by businesses, in a bid to compete with the wind power technology that dominates the industrial market. 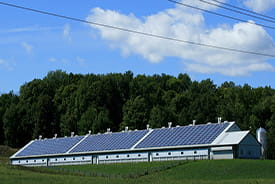 The technology can produce ultra-thin films from surfactant-free surface-engineered silicon nanocrystals (SiNCs). This particular method improves the smoothness of SiNCs and reduces thickness, to create a more stable film. The technology is environmentally friendly, ­as it can be performed at room temperature, reducing the total energy used in the process and providing flexibility for manufacturers.

There is also no compromise on quality of PV cells, as the amount of sunlight absorbed increases when using the femtosecond laser during surface engineering of the film. It is hoped that the research can be used for varying applications, not least the improvement of solar power panels.

The last decade has produced a new alternative to silicon PV cells that could challenge their position on the market. Made from readily available materials such as ammonia and iron, perovskite solar cells are a highly efficient and inexpensive substitute for the solar power industry. As silicon solar cells struggle to reach 20% in power conversion efficiency, the National Renewable Energy Laboratory, US, has revealed data predicting 50% efficiency for perovskites.

Occurring naturally, perovskites already have the inherent ability to absorb light, making them the ideal candidate for PV cells, as well as being light-weight, flexible, and semi-transparent. Perovskites are popular with solar power researchers and engineers as they can absorb a wider range of wavelengths of light, increasing their capacity to convert sunlight into electricity.

Researchers at Stanford University have focused their research on ‘multijunction cells’ ­– cells with both perovskites and silicon. They found that stacking perovskites onto silicon could improve the total capacity of the system to generate electricity, perhaps providing an opportunity to adapt current solar panels, instead of replacing them, to reduce costs. 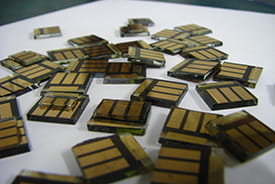 Despite predictions of a 2017 launch of perovskite solar cells onto the market, no company has yet launched the anticipated products and research remains in development – although perovskite solar cells are going through the early stages of commercialisation. One major issue is toxicity, with some fears that perovskites could be carcinogenic; particularly dangerous for solar panels installed at home.

Another problem recorded by researchers was a tendency for perovskites to easily degrade under extended periods of intense UV light, although the probability of this is reduced through stacking. However, a recent paper has recorded long-term stability in perovskite solar cells – they were exposed to 1,000 hours of sunlight at 60 °C – bringing the technology closer to market.

However, confidence in the potential of perovskite solar cells is evident, with market research experts IDTechEx, Cambridge, UK predicting the perovskite market will reach over $500 million in the next ten years. With positive progress towards more efficient and cheaper installations, solar power looks ready to dominate the renewable energy market in years to come.