From seabed to showcase

Not only does science lead us into the future – as Helen Bonser-Wilton, the Chief Executive of the Mary Rose Trust, illustrated at SCI’s November Public Evening Lecture – it allows us to illuminate and preserve the past.

Describing the Mary Rose as ‘a key ship of a key king’, Bonser-Wilton told the story of the warship that sailed for 33 years throughout five of Henry VIII’s six marriages, and sank in the Solent in 1545 during a confrontation with a French invasion fleet.

As the Mary Rose lay on the bottom of the Solent, waves carried away the broken port side, and the remaining starboard side, its contents, and the deceased crew, were buried under a hard layer of silt, which prevented oxygen and therefore naval shipworm from degrading its remains. 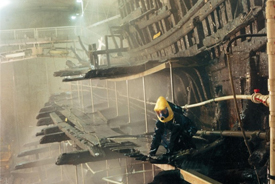 Credit: The Mary Rose Trust
A technician services the spraying system on the Mary Rose.

In the 1800s, the first recovery dives were attempted, and although unsuccessful, the Deane brothers – inventors of the diving helmet – contributed to the ship’s later rediscovery by plotting Mary Rose’s location on a nautical map. In 1965, local historian Alexander McKee and members of the Southsea Sub-Aqua Club began to search for the wreck, first sonar scanning the seabed, and then using water jets and makeshift airlifts to suck away silt. In 1971, storms uncovered a deck timber, and over the next seven years, divers discovered more frames, planking, and deck timbers.

The first excavations, led by archaeologist Margaret Rule, were carried out on a shoestring by volunteer divers who ‘the minute they came off the boat the end of the day, were out raising money to fuel the boat for the next day’.

In 1979, the Mary Rose Trust was founded, with Prince Charles as its President, and in the following years 500 divers carried out more than 28,000 dives to carefully excavate artefacts from each section of the ship, recording in minute detail each of the 19,000+ items’ precise location.

‘It quickly became clear that we not only had a wreck here, but a complete treasure trove of Tudor artefacts that, due to the tragedy, could be dated to one specific day in 1545, which is unprecedented. Nowhere in the world is there a Tudor collection that covers every level of society, from officer in the upper deck to common sailor in the lower deck.’

Once the ship’s contents were removed, the focus shifted to raising the ship itself. Industrial engineering partners came to the rescue, with Babcock designing the lifting cradle that Mary Rose still sits upon today.

Engineers used a water spray to tunnel underneath the 400–500-tonne wreck to create enough space to drill into the wreck to attach plates and lifting wires, then transferred the wreck into the cradle underwater. A television audience of over 60 million watched Mary Rose being raised live in 1982. 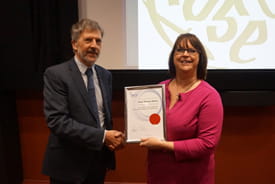 What followed was an unprecedented, multidisciplinary effort to preserve and display the wreck and its thousands of artefacts, from guns and navigation equipment to the sailors’ rosaries, nit combs, and leather shoes. For the first 12 years, the Mary Rose was sprayed with chilled water to prevent it from drying out, while scientists conducted research into its long-term conservation.

Taking cues from the Vasa, a staggeringly preserved 17th Century warship, the Mary Rose team treated the timbers with polyethylene glycol, a chemical wax, to replace the degraded timber cells, requiring spray application under 98% humidity. For 19 years, while spraying was ongoing, the ship was sealed within an insulated hotbox.

In 2013, when the new Mary Rose Museum was opened in Portsmouth, the sprays were turned off, although the ship remained in an insulated hotbox as it dried. The drying process was informed by complex computational fluid dynamics, to ensure that all elements of the ship received the same temperature and relative humidity, preventing variation in drying rates, and therefore warping, shrinking and cracking. Over three years, 100 tonnes of water was removed from the ship. In 2015, the drying was complete.

Wooden artefacts were treated in tanks filled with water, which was gradually replaced with polyethylene glycol. After around two years, the impregnated artefacts were frozen, turning any remaining water to ice, which was then pressurised to turn directly into a gas, bypassing the liquid stage and reducing the drying time and associated cracking. 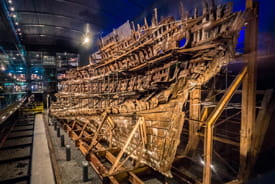 Bacterial reactions to the sediment, meanwhile, had caused sulphur to be incorporated into other timber elements, oxidising on their retrieval from the ocean, causing acidic damage – sometime exacerbated by the presence of corroded iron, so topical pastes were developed to draw corroded iron out of the wood. Examination of the cod found in the kitchen located their origin in Iceland and Canada, pointing to trade between these countries and Britain in Tudor times.

Meanwhile, DNA research allowed scientists to digitally reconstruct the faces of crew members, while a collaboration with Swansea University’s sport science department identified the physiological affects of archery, causing a twisted spine and lopsided development. Laser spectroscopy was used to identify conditions such as rickets and scurvy in the sailors’ bones. Just some of the many scientific studies carried out on the wreck and its artefacts.

Mary Rose illuminates life from every level of Tudor society – the historian David Starkey described it as ‘England’s Pompeii’. But without science, the Mary Rose Trust would never have been raised or its contents preserved. Even today, spectroscopy allows its condition to be monitored – engineers are now designing a new support structure as the wood shrinks.

Today, it sits in a purpose-built museum just metres from where it was built in Portsmouth Historic Dockyards, beside Nelson’s flagship, HMS Victory. Visitors are treated to an immersive experience, designed to replicate life on board – the smells, the creaking timbers – even films depicting ship life projected into the cabin.

Thanks to charity and the tireless efforts of volunteers, academics, scientists and engineers, the key ship for the key king has unlocked a window into Tudor life.