It can be hard to keep up with the pace of change in medical research now. In the past 50 years, we have seen wearable robotic limbs developed, highly active anti-retroviral therapies, functional magnetic resonance imaging, and minimally invasive robotic surgery, all of which have dramatically altered medical practice.

In just October and November of this year, SCI covered a portable drug manufacturing system for biopharmaceuticals to be used in precision medicine or to treat outbreaks in developing countries, a 3D printing process that could be used to create organ tissue and artificial arteries, and a fluorescent chemical that can be used to help surgeons remove brain tumours. All these developments could have a significant impact in their respective fields.

It’s also well-known that AI and 3D printing are going to become increasingly important in medicine, as well as personalised immunotherapies for cancer treatment. But there are other innovations happening in medicine that may have a more immediate impact.

Diabetes is one of the fastest growing global health issues, with more than 425m people currently affected. Also known as an artificial pancreas, the hybrid closed-loop insulin delivery system is making Type I diabetes more manageable by replacing the monitoring glucose levels continuously and providing insulin that can stabilise blood sugar levels as required.

This technology for Type I was approved by the FDA in late 2016, although it is only just entering the market. However, its success so far has inspired similar products to treat Type II diabetes patients. The University of Cambridge Metabolic Research Laboratories and Diabetes UK have worked together on one such study, in which senior author Roman Hovorka said the device ‘considerably improved glucose control [and didn't] increase the risk of hypoglycemia’ while people with Type II diabetes are in the hospital.

It’s worth remembering how complex diabetes management is. Dr. Gerald Bernstein, an endocrinologist and coordinator of the Friedman Diabetes Institute at Lenox Hill Hospital in New York City, US, has said publicly. ‘We got to the moon and have rocket ships that can go back and forth, all before we were able to create anything close to an artificial pancreas because of the complexity,’ he said.

Forget DNA, the future of medicine is all about RNA (ribonucleic acid). Rare genetic diseases such as Huntington’s and neurological conditions could be treated with RNA-based therapies that interfere with genetic data. These therapies allow scientists to remove or edit a patient’s genetic abnormality before it is translated into proteins, and before they become functioning or non-functioning. This approach is an expansion of earlier attempts at gene therapy, where mutated genes in cells are replaced with functional ones. Doing so at the RNA-level is thought to increase safety and delivery.

Biological engineers at Massachusetts Institute of Technology (MIT), US, have recently written up a study where they regulated the expression of RNA once it gets into cells, providing precise control over the dosage a patient receives. Jacob Becraft, one of the lead authors of the study, said: ‘We can control very discreetly how different genes are expressed. Historically, gene therapies have encountered issues regarding safety, but with new advances in synthetic biology, we can create entirely new paradigms of “smart therapeutics” that actively engage with the patient's own cells to increase efficacy and safety.’

This new approach focuses on circuits consisting of single RNA strands. These strands include both the genes for the desired therapeutic proteins as well as genes that control the expression of the therapeutic proteins. This enables the researchers to “switch on” the circuits when required by using drugs that interact with RNA-binding proteins. Those drugs can stabilise or destabilise the interaction between RNA and RNA-binding proteins, as necessary, and block RNA gene expression. 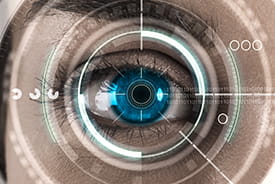 A needle in the eye sounds like a proverb – in fact, it is in both Poland and Sweden – or, at least, very uncomfortable but it might actually be a way to treat eye diseases such as glaucoma and macular degeneration.

Current treatment methods, such as eye drops, ointments, and eye injections, can be ineffective and/or painful. A patch of microneedles, similar to a contact lense, has been developed by a team led by Nayang Technological University Professor Chen Peng from the School of Chemical and Biomedical Engineering, with help from Singapore National Eye Centre's Associate Professor Gemmy Cheung.

The microneedles are biodegradable and deliver drugs into the eye in a controlled release. The patch is pressed onto the eye surface briefly, like using a contact lenses, and the drug-containing microneedles detach by themselves and stay in the cornea, releasing the drug over time as they dissolve. Tests on mice with corneal vascularisation showed a 90% improvement over eye drop with 10 times more drug content.

Elsewhere, work on pharmacogenomics is progressing, urged on as a response to the opioid crisis, which has now been declared a public health emergency in US. The approach predicts individualised metabolism of drugs based on the patient’s genetic makeup and tailors treatments appropriately. Adverse reactions can be avoided as well as ineffective prescriptions, such as opiate-based drugs for patients who get little or no pain relief from the drugs.