A total of 19 members and guests from the SCI London Regional Group spent 10 May 2017 visiting two of London’s lesser known, but unique Museums, just yards from Trafalgar Square.

The morning was spent at the Benjamin Franklin House Museum. As scientists, we are aware of Franklin’s early experiments with electricity and the famous kite experiment, but this is the house he lived in for 18 years as a politician representing various US states in negotiations with the British Government in London. Franklin was born in Boston in 1706, made a brief visit to London at the age of 18, returned to Philadelphia to begin his career as a businessman, writer, scientist, diplomat, and philosopher. He spent 18 years in London from 1757-1775, returned to the United States where he was a founding Father, and a signatory on their Declaration of Independence. Since the normal museum house tour covers mainly his life in London, Dr Fred Parrett (SCI London Group) prepared a short illustrated presentation of the Science of Benjamin Franklin, covering not just his electricity experiments, but his other scientific interests and inventions. Franklin was made a Fellow of the Royal Society in 1756 in recognition of his work on electricity. Perhaps less well known is his association with Joseph Priestley, who with the support of Franklin did himself carry out several experiments on electricity, before his more well know discovery of oxygen. Franklin was one of the active scientists (called philosophers at that time) who proposed Priestley be appointed as a Fellow of the Royal Society. 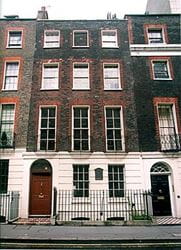 After the presentation, the group were given the tour of the house. Not your usual museum tour, we walked the rooms that Benjamin Franklin did, led by a tour guide, a young lady in period dress and speaking as Polly Stephenson, the daughter of the landlady at this house where Franklin rented rooms during his 18 years in London. It was a rather different and interesting way to learn more of the personal and private life of this important historical man. The tour finished with a demonstration of a working ‘harmonica’ - one of Franklin’s well known inventions.

After lunch at the almost adjacent Sherlock Holmes Pub the group returned to Craven Street – just a few yards from the Benjamin Franklin House to the British Optical Association Museum. Located at the offices of the College of Optometrists, this remarkable museum founded in 1901, holds a collection of over 20,000 objects and items. We were privileged to be hosted for the tour by Neil Handley, the Museum Curator since 1998.

The basement museum rooms are filled with over 2000 pairs of spectacles, from the rudimentary applied technology of the seventeenth century through to the latest high-fashion designer eyewear, including items showing the development of contact lenses. The collection is not just aids to vision but includes an extensive collection of optometric instruments used by optometrists in conducting the professional eye examination, prescribing and dispensing spectacles. In addition to the basement museum we were given a guided tour of other college rooms where we were shown the collection of the many oil paintings on optical themes with fascinating portraits, caricatures and satires.

Finally, we moved to the ‘British Optical Association Library’, known to be one of the world’s greatest collections of antiquarian ophthalmic books. The library contains around 6,500 optical books and pamphlets and houses titles from the likes of Galileo and Newton.