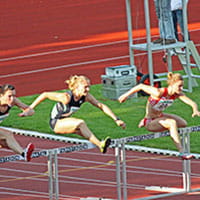 On Tuesday 26 April 2016, SCI’s Public Evening Lecture will enter the world of sport, examining the facts and fiction of doping and anti-doping. The lecture will be delivered by Prof David Mottram, education advisor for UK Anti-Doping (UKAD). In his presentation, he will review some of the key events in the evolution of doping and anti-doping that have influenced our present approach to the problem.

Doping and Anti-Doping in Sport
Doping in sport goes back as far as there has been sport, with dangerous substances, such as Strychnine and Nitro-Glycerine, being used until the early 20th Century.  Over recent months various athletes have been banned for doping, countries have been ruled to have breaches Anti-Doping codes and several senior officials are being investigated for bribery and doping cover-ups. And the scale of the problem only seems to be getting bigger.

Prof David Mottram, Emeritus Professor of Pharmacy Practice at the School of Pharmacy and Biomolecular Sciences, Liverpool John Moore’s University, will provide an insight into the world of doping in sport and detail the anti-doping rules and regulations that are in place to combat this threat. The international rules and regulations for the management of doping in sport, based on the World Anti-Doping Agency (WADA), will be explained. This will include a brief overview of the list of prohibited substances and methods, which are reviewed and updated annually following a comprehensive review. The 2016 list has been in effect since 1 January 2016 and forms part of the foundation of the World Anti-Doping Code. Moving on, the systems in place for testing and sanctioning athletes will be illustrated and finally, the evidence for the extent of drug misuse in sport will be explored with a view to what the future may hold.

About the Speaker
Prof David Mottram, served on the pharmacy planning committee for the 2002 Manchester Commonwealth Games and was a member of the Medical Services Group for the London Organising Committee (LOCOG) in preparation for the 2012 London Olympic and Paralympic Games. Currently, he is an education advisor for UK Anti-Doping (UKAD). He has designed and developed online education programmes directed at healthcare professionals for UKAD, the International Olympic Committee, and the WADA. His current specialist area for research and teaching is centred on the use and misuse of drugs in sport and he is collaborating with colleagues at Qatar University to develop and deliver undergraduate and postgraduate education programmes on drugs in sport.

His book Drugs in Sport was first published in 1988 and is now in its sixth edition.