Through recent media coverage, we have been made aware of the threat posed to Public Health by the increasing resistance to antibiotics. However fewer people know that the issue is broader with is growing concern on the resistance to antimicrobials - drugs that treat infections caused by other microbes such as parasites, viruses and fungi. 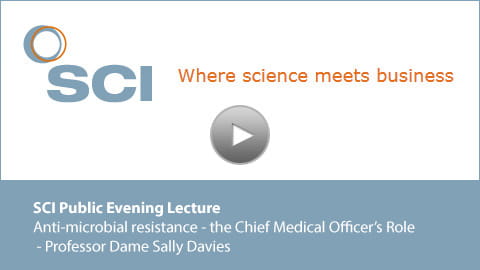 This lecture was the first in our series of Public Evening Lectures for Autumn 2014. For more details on upcoming and past lecture, please click on the link below.

About the speaker
As the Chief Medical Offer, Dame Sally is the independent advisor to the UK Government on all medical matters, with particular responsibilities regarding Public Health.

Dame Sally is a member of the World Health Organisation (WHO) Executive Board and chairs the WHO Strategic and Technical Advisory Group on antimicrobial resistance (STAG-AMR). She led the UK delegation to the WHO Ministerial Summit in November 2004 and the WHO Forum on Health Research in November 2008. From 2000-2012 Dame Sally was a member of the WHO Global Advisory Committee on Health Research (ACHR). She also chaired the Expert Advisory Committee for the development of the WHO research strategy, endorsed by the World Health Assembly in May 2010. Dame Sally is a member of the International Advisory Committee for A*STAR, Singapore and has advised many others on research strategy and evaluation including the Australian NHMRC, Canadian CIHR and Norwegian Government.

Dame Sally was awarded a DBE (Dame Commander of the British Empire) in the 2009 New Year Honours for services to medicine and in September 2011 she was conferred as Emeritus Professor at Imperial College London. Dame Sally was elected a Fellow of the Royal Society on 1 May 2014.