The regulation of drugs - including alcohol and tobacco - is an issue of pressing importance due to the increasing health care costs associated with their use. There are also new sorts of synthetic agents being developed and sold over the internet of which very little is known.

Prof Nutt's talk reflected on the issues highlighted above in the light of his ten years experience on the governments Advisory Council on the Misuse of Drugs from which he was sacked two years ago.

He also presented new analyses that compare the harms of drugs and alcohol using more sophisticated methodology. He challenged many of the current misconceptions about drugs - their harms - and how to deal with them.

A video of this lecture can be seen below. 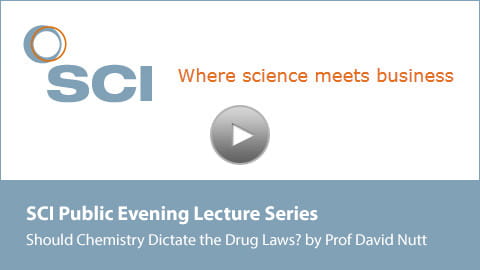 He has edited the Journal of Psychopharmacology for over a decade and acts as the psychiatry drugs advisor to the British National Formulary. He has published over 400 original research papers, a similar number of reviews and books chapters, eight government reports on drugs and 26 books.

Previously he has been member and Chair of the Advisory Committee on the Misuse of Drugs (ACMD - 1998-2009), President of the British Association of Psychopharmacology (BAP), member of the HEFCE/NHS Senior Lecturer Selection Panel and member of the MRC Neuroscience Board. Other previous national contributions include serving as the medical expert on the Independent Inquiry into the Misuse of Drugs Act (2000 Runciman report), and membership of the Committee on Safety of Medicines, the Committee on NHS drugs and the Ministry of Defence Science Advisory Board. He was the clinical scientific lead on the 2004/5 UK Government Foresight initiative 'Brain science, addiction and drugs' that provided a 25-year vision for this area of science and public policy and in 2006 he was Director of Bristol Neuroscience.

He broadcasts widely to the general public both on radio and television including BBC and Channel 4 science and public affairs programmes on therapeutic as well as illicit drugs, their actions harms and their classification. His 2012 C4 programme, Ecstasy Live was its highest-rated programme ever in terms of viewer interaction. He also lecturers widely to the public as well as to the scientific and medical communities; for instance has presented three time at the Cheltenham Science and Hay Literary Festivals and several times for Café Scientifiques.

In 2010 The Times' Eureka science magazine voted him one of the 100 most important figures in British science, and the only psychiatrist in the list.