SCI welcomed Mr Guy Smith to present a Public Evening Lecture on 10 February 2016, on the need to use analysis based on good science that balances both the needs of UK farmers and the needs of the wildlife that uses their crops as habitat.

In 2013, the European Union and a few non EU countries restricted the use of certain neonicotinoids. More recently the UK government, via The National Pollinator Strategy, has called for a refocus to deliver a precautionary, hazard-based approach to pesticide use to help protect bees. The National Farmers Union believes that farmers need to continue to focus on evidence-based actions that will deliver real benefits for bees, particularly to provide more of the food and habitat they need and not be drawn into promoting ineffective approaches, regardless of their apparent popularity. 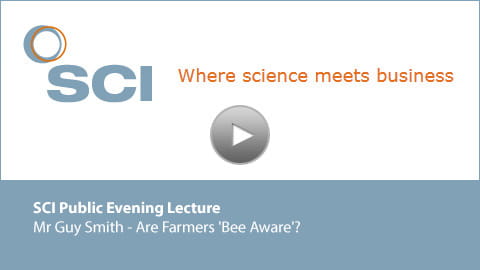 This lecture was part of our series of Public Evening Lectures for 2015/2016. For more details on upcoming and past lecture, please click on the link below.

About the Speaker
Mr Guy Smith is currently Vice President of the National Farmers Union, Mr Smith served for eight years on NFU Council as the Essex delegate. Other NFU positions include four years as a member of the Governance Board and six years as Chair of the NFU Communications Group. Guy is also a Trustee of FACE (Farming and Countryside Education) and a past Chairman of the Landskills New Entrants Committee. He has also recently served on the Board of the HGCA (Home Grown Cereals Authority), retiring in March 2014. Guy is a Fellow of the Royal Agricultural Society and recipient of an Honorary Doctorate for services to Agriculture from Essex University. My Guy Smith farms a mixed and diversified family farm in north-east Essex.

Funding, diversity and wellbeing are essential for UK R&D

A Celebration of Organic Chemistry 2020