Early Career Scientists represent SCI at Voice of the Future 2016

Written by: Dr Philip B. Sellars

Photography by: Royal Society of Biology

Tuesday 1 March saw the Royal Society of Biology’s “Voice of the Future” (VOF) event take place in the Boothroyd Room at Portcullis House, Houses of Parliament. Though in its 6th year, six early career scientists were excited to represent SCI in the society’s first appearance at the event. Natalie Cureton (University of Manchester), Michael Lainchbury (Argenta Discovery Ltd), Jade Owen (Intertek Melbourn), Jessica Sage (RSSL), Philip Sellars (University of Warwick) and Thomas Wheatley (AstraZeneca) were selected to attend the event as they are active on a number of SCI’s technical and regional interest groups.

The VOF event is an inversion of a Commons Select Committee meeting - where MPs grill expert witnesses - that allows early career scientists (aged 16-35, from schools and societies across the UK) to question the government’s Chief Scientific Advisor and a number of MPs about science policy and related issues.

The day began with a warm welcome from the Speaker of the House of Commons, John Bercow MP, who took time from his busy schedule (Parliament was in session) to address the scientists in the room. The Speaker, a self-confessed non-scientist, delivered the address with his usual charm and energy, but he probably surprised many with the level of his enthusiasm for science before encouraging us all to enjoy the day in Parliament.

In the first session, Sir Mark Walport, the Government Chief Scientific Advisor, was being questioned. His first question highlighted the complexity of making policy decisions; as scientists we sometimes focus on the technicalities too much. Sir Mark pointed out that whilst the starting point of making any policy decision should be the technical knowledge, policymakers must also assess the deliverability of any action and whether it fits with their own values and those of the wider public.

The diversity in the backgrounds and constituencies of the MPs led to an excellent discussion in this hour-long session, and it was refreshing to see politicians focussing on the questions (and in particular the science) rather than trying to score points against their cross-party rivals! We were also pleasantly surprised by just how much the MPs expressed their own opinions (rather than party lines) on a number of topics, especially on membership of the EU and the upcoming referendum.

The third session saw Jo Johnson (CON: Orpington), Minister of State for Universities and Science, being quizzed by the young scientists. A slight criticism of this session might be that we didn’t get as many of Mr Johnson’s personal opinions on some of the aspects of science, though this was because the questions were geared more specifically towards science policy rather than general science topics. That said, it was still possible to see that his enthusiasm for the underlying science was of the same level as that of the other MPs. Indeed, the first question in this session was about what politicians should do when scientists and public opinion are not in agreement; Mr Johnson pointed out that their first duty is to follow the evidence and to ensure that everyone is well informed before making any decisions.

In the final session of the day the Shadow Minister for Consumer Affairs & Science, Yvonne Fovargue (LAB: Makerfield), was the witness. This was an excellent closing session in which Ms Fovargue showed a great deal of passion for instilling a desire to understand science into the next generation and offered some good suggestions of how this might be achieved. Furthermore, she provided good exemplification of Sir Mark’s point that policymaking involves balancing knowledge, deliverability and values. When asked about whether a “sugar tax” should be introduced, Ms Fovargue’s response was a resounding “No”. While it is understood that there is a problem with too much sugar in people’s diets, rather than helping to improve the issue, a tax would be more likely just to penalise financially those who find it hard enough to make ends meet. A far better solution would be to help people to further understand the benefits of healthier eating. 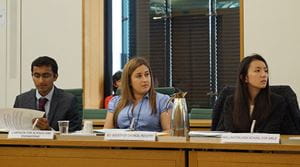 All of the societies had submitted questions in advance of the event, though clearly many of these would not be asked given the amount of time available in the day. Two of the questions the SCI had submitted were selected and some of the other societies’ questions were also on themes of interest to our representatives.

Our first question was put to Sir Mark Walport in session one by Natalie Cureton:

“With the removal of the European Commission’s Chief Scientific Advisor, how can we ensure that science is not forgotten in the policymaking decisions made in Europe?”

Sir Mark noted that while such a removal does not look ideal, the mechanism of giving advice to the Commission has been reconstituted. A small committee of advisors has been formed; its first meeting took place in January and seemed to be well supported by the Commission, leading Sir Mark to believe that there is still a serious emphasis on making sure good scientific advice is available to those making policy in Europe.

The second question was asked of the Select Committee in session two by Jade Owen:

“What needs to be done to redress the gender imbalance at the higher levels of science?”

The panel discussed, among other issues, problems with the Research Excellence Framework assessment not taking into account things such as career breaks for having children. Though an academic career is probably easier to keep up-to-speed with than an industrial one, getting to the point of being full-time academic staff is somewhat more difficult. Mid-level scientists are plagued by positions being on short-term contracts which do not support taking breaks for having a family, and the irony of a lack of job security in a field that requires a large amount of commitment was highlighted. It must be said, though, that this is not just an issue that affects women - all early career scientists in academia suffer from this lack of job security.

In what was possibly a “first”, the (partial) Select Committee on the panel was actually 75% female, though this is far from being representative of real life. It did, however, mean that we heard opinions on the issue from women who have experienced success despite the problems that remain. They said that other successful women supporting and inspiring them played a large part in their career development, and that this needed to continue. However, in order to really improve the inclusion of women in the higher echelons of society, men need to play a much more supportive role.

The discussion of this issue was also continued in session four, and Ms Fovargue pointed out that more research was required to identify clearly the barriers to the inclusion of women in certain areas of science; such as engineering and maths rather than medical and life sciences, where there is greater representation. Ms Fovargue and the Select Committee both highlighted the drop off in girls participating in science subjects as they progress through school, to the extent that 46% of schools have no girls in their A-level Physics classes. The panellists agreed that inspiring these girls to do science subjects in apprenticeships and further education is key to improving the inclusion of women in higher levels of science.

The inspiration of students (and teachers) was also a theme that ran throughout the day. Ms Monaghan (herself a former teacher) pointed out that we need to make schools an environment in which people want to work and learn. We need teachers to be enabled to enthuse youngsters about all subjects and scientific thinking should infuse everything that is done in schools. A clear requirement is to engage the young audiences, and this is something that is helped greatly by the involvement of practising scientists through schemes such as the STEMNET ambassador scheme. Mr Johnson noted that some 40% of these ambassadors are female, so this should also help in encouraging more girls to continue to study STEM subjects. Having participated as a STEMNET ambassador myself, I have seen the enthusiasm that is also generated in the teaching staff when ambassadors share their experience in different aspects of practical science research and application. Contributing to schemes such as this is a good way for all of us to help improve the education of future generations. 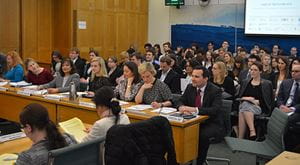 By far, one of the most important themes that ran through all of the sessions was communication. Policymakers need the advice given by scientists to be clear and understandable, and MPs are often very pressed for time so information passed to them must allow comprehension without them having to spend time further researching topics. An important message to us all is that MPs would like to hear from us more often, as that is the best way for them to discover and understand our activities. The Royal Society’s Pairing Scheme, which allows scientists and civil servants to learn about each other’s work, is one good way of enabling this to happen. We were also encouraged to participate in the Select Committee’s “Evidence Check” forum, which involves contributing or contesting evidence that the Committee uses to form its recommendations. A forthcoming forum will address the issue of GM.

Improving the way in which we disseminate science to a wider audience should be something on which we focus our efforts. Indeed, if we are able to find a way to communicate our science that enthuses youngsters in schools, we should be able to reach all members of society.

The role of the media in this communication was also questioned, with there being a perception that science often gets misrepresented. Ms Creasy pointed out that this is not just a science issue; Kim Kardashian probably feels somewhat misrepresented in the media too! The Select Committee panel noted that the general incremental advancements in science are not really reportable in mainstream media, there are a lot of other stories that sell much more easily. It is still essential for us to properly understand how to engage with the media, however, and SCI’s partner Sense About Science run frequent workshops for early career scientists to learn more about how to do this.

One piece of science that has hit the headlines recently is Major Tim Peake’s mission to the International Space Station. We were privileged to receive a video message from Major Peake in which he answered two questions from MPs present at the event and gave an inspirational address to the young(-ish) audience. This message also brought another couple of “firsts”: it was the first message from space addressed to Parliament; and Major Peake was the first witness to give evidence from a zero-gravity environment! In the message, the two schools present at the event were mentioned by name, leading to some excitement among their students. What I found brilliant was that a similar excitement was generated in the ranks of the Select Committee panel when Major Peake read out the name of their chair, Nicola Blackwood, before answering her question, showing that the MPs are just like the rest of us!

The Voice of the Future 2016 event gave us a fascinating insight into how science policy works and how we might affect it. It was of great inspiration to us and it certainly gave us all some food for thought in how we approach our next day at work.