Following up from the World Malaria Day (WMD) celebration initiative and subsequent commitment by SCI in 2015i to be part of the global millennium development goal to eradicate malaria, it so happens that this year’s theme is ‘Eradicate Malaria for Good’. The millennium development goal is to decrease malaria by 90% by 2030. In spite of the encouraging decrease in malaria cases in certain areasii (Figure 4); this time frame is very ambitious, however efforts and support from the SCI international multidisciplinary pool of expertise is a very realistic glimpse of hope towards contributing to the global efforts and commitments to alleviate the burdens of malaria.

The current first line of treatment of malaria  during the asexual lifecycle of the parasite is artemisinin based combination therapy (ACT) where Artemisinin derivatives dihydroartemisinin, artesunate and artemether are  administered together with other known antimalarials  such as lumefantrine, mefloquine, amodiaquine, sulfadoxine/pyrimethamine, piperaquine and chlorproguanil/dapsone in order to decrease the possibility of malaria parasites developing resistance to the antimalarials administered especially the most deadly Plasmodium Falciparum (Figures 1&2).

In 2015 malaria treatment was given a boost by awarding the Nobel Prize in physiology and medicine jointly; with one half being awarded to Professor Youyou Tu, ‘for her discoveries concerning a novel therapy against Malaria’ .  Although the term ‘discovery’ is much disputed due to the fact that Malaria has been in existence for centuries and traditionally treated locally in endemic areas; the scientific community does credit this great scientist in Traditional Chinese medicine research and development for having managed to extract Artemisinin from woodworm, which inhibits malaria parasite growth which is used to treat fevers in Traditional Chinese medicine. We can count on there being several other antimalarial active ingredients to be yet discovered/extracted from various other traditional local medicines from areas where malaria has always been endemic, in addition to other active analogues of such extracts. Other encouraging news includes the return of Chloroquine as a first line drug to treat malaria.  Not that it’s use had disappeared;  as the drug still works in many cases but it was given a back seat in national malaria control programmes. 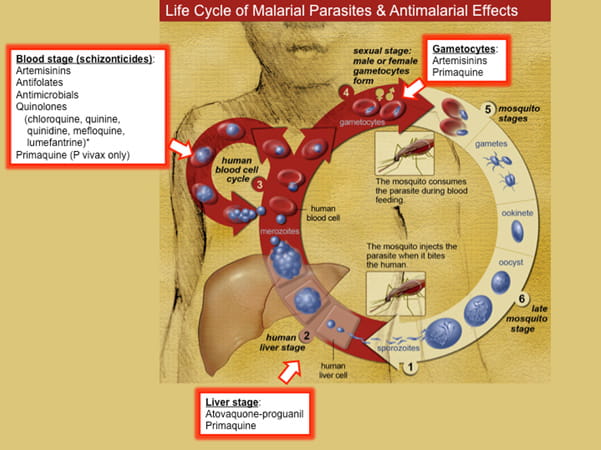 Vaccine development saw the announcement of RTS,S/AS01 (RTS,S) a malaria vaccine that has been developed through a partnership between GlaxoSmithKline Biologicals (GSK) and the PATH Malaria Vaccine Initiative (MVI), with support from the Bill & Melinda Gates Foundation and from a network of African research centres that performed the studies. However this vaccine provided 35-50% protection on a small clinical sample and further clinical and research developments are required before marketing approval can be granted as a vaccine against malaria. On 29 January 2016, WHO released a position paper on the malaria vaccine calling for further R&D studies.  iii

Unfortunately malaria diagnosis has not changed much, with diagnosis reliance still being on microscopic observation of blood smears and the most popular Rapid Diagnostic Tests (RDTs) among national malaria control programmesiv. More research and development is required to improve malaria diagnostic tools that are affordable to endemic areas which take into account environmental local conditions including electricity power cuts and subsequent storage shelf time, ease of interpretation of results by individuals and healthcare workers and minimum false positives.

One Control Method is not enough.
Great efforts have been made during the last decade to get insecticide treated bed nets (ITNs) used by people sleeping in areas where the Anopheles mosquitoes transmit malaria. The campaigns have been successful as the number of young children dying has fallen dramatically, but malaria is still as evident as before. The World Health Organisation(WHO) has more recently been advocating integrated vector management (IVM)v, although very few places have implemented a programme that involves more than a supply of bed nets.   Indeed most of the success to date has been just a combination of ITNs and indoor residual spraying (IRS) (Figure 3) made feasible by donor aid funding, especially through the President’s Malaria Initiative (PMI) USAID programme. Relying on killing mosquitoes that enter houses has inevitably led to the mosquitoes becoming resistant to the pyrethroid insecticides, repeating the situation in the 1960’s when use of DDT applied by IRS was withdrawn due to insecticide resistance.  Since 2010, insecticide resistance has been reported in 53 countriesvi. What has to be recognised is that the five Plasmodium species (falciparum, vivax, ovale, malariae, knowlesi) that cause human malaria are transmitted by more than 30 Anopheline mosquito species with diverse breeding and feeding habits, and result in different disease spectra in different population target groups and epidemiological settingsvii.

Looking back to the successful control of malaria prior to insecticides, the emphasis had always been on drainage to remove the larval breeding sites, at least close to houses, the improvement of housing by screening windows and doors to prevent access of mosquitoes into houses and sleeping under a bed net without any insecticide.  The most quoted schemes were in the Tennessee Valley, USA, the draining of the Pontine marshes in Italy and drainage in Palestine. The arrival of DDT in the 1950’s finally removed the burden of malaria in these countries.

There is now recognition that using ITNs is not going to eliminate malaria in Africa and other current endemic areas, with some arguing that the mosquitoes are biting more outdoors or earlier in the evening. Recent studies have shown that An. funestus is more susceptible to certain indoor-based insecticide interventions than An. gambiae/An. coluzzii, which in turn, is more susceptible than An. arabiensis. Thus An. Arabiensis may have a competitive advantage where it is found in sympatry with other more endophilic vectors, and potentially increase the need for outdoor-based vector interventions to deal with any residual transmission barring the way to malaria elimination.

Current thinking is that with new insecticides and using more larvicides, the vector population can be reduced.  There is also a hope that new technology will enable the release of genetically modified mosquitoes to reduce the female mosquito population that transmits the disease. Certainly with greater effort being put on the search for new insecticides, new molecules should be available within the next decade. As WHO recognises, new chemistry is only part of the picture and alternative approaches are needed, not least to tackle transmission that occurs outside the home where LLINs or IRS are not protective.

What is getting little attention is the need to improve housing to prevent access for mosquitoes and drainage in housing areas to minimise larval survival. As elsewhere in the world, people are moving to live in towns and with the rapid growth of urban areas, the quality of housing is not always improved and drainage is often very inadequate. One example of IVM has been at the Copper Mines in Zambia, where drainage within 7 km of the mines has been adopted since 2002, together with some larviciding of permanent ponds, better housing, Indoor Residual Spraying (IRS) and occasional fogging (Figure 4). 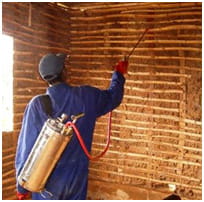 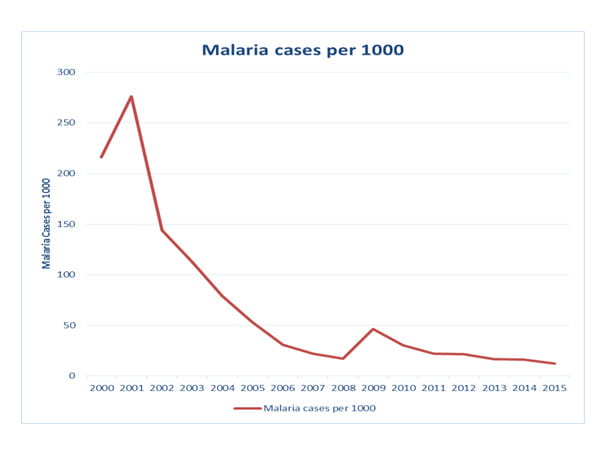 Figure 4: Decline in cases of Malaria at two copper mines in Zambia since 2001

While there has been a steady decline in cases of malaria, there are still cases and some of this may be due to mosquitoes entering the mines from beyond their control.

Although malaria has been eliminated from the USA, mosquito control is well organised as people just do not want to suffer from insect bites and other mosquito borne diseases such a West Nile fever.  The current emphasis there remains on drainage and good quality housing, but each district has its mosquito control unit, which uses both larvicides and adulticides, especially at the start of the warmer weather. In many cases the insecticides are applied aerially, a technique not used in Africa.  Some cold fogs are applied using truck mounted equipment (Figure 5), especially if monitoring indicates a need in a specific area, such as occurred with the outbreak of West Nile fever.  As many of the poor quality houses are in urban areas in Africa, the application of low dose insecticide as an area-wide cold fog applied in the evening or pre-dawn when mosquitoes are active, as a series of sequential treatments seems to be an important omission.   Such a technique requires far less labour and is not intruding into individual homes.  At the same time more emphasis must be placed on the two key factors from pre-insecticide days… good drainage and screening of houses. 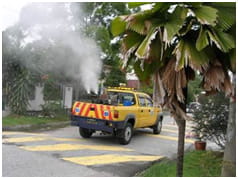 The Economic Argument
The poor health of workers due to repeated attacks of malaria leading to many days ‘off-work’ has led many commercial enterprises to realise that combatting the mosquito vectors is essential.  While Ministries of Health play their role with medication and integrated Vector management, most countries rely heavily on unsustainable aid from   ‘donor’ foreign governments and organisations. There is much poverty driven inadequate access to current national malarial programme approved drug treatments and preventive measures such as medication, insecticide treated bed nets, indoor residual spraying, mosquito traps, mosquito repellents and environmental management of breeding sites among other issues. The poverty in malaria endemic areas and exploitation of fake antimalarial products are of considerable concern, requiring greater efforts to improve the implementation of control measures and sustain efforts to eradicate the disease. Such efforts require a concerted effort from not only from drug development experts but also from vector control and environmental management experts and advocates.