No one would question the importance of insulin as a drug. First produced in the 1920s, insulin is used to control blood sugar levels in type 1 diabetes patients, who would otherwise die from their condition.1 Although nearly a century has passed since its discovery, scientists have yet to discover or develop an effective replacement for this peptide drug. This is because peptides are responsible for extremely specific molecular interactions in the body, for example, as hormones, neurotransmitters and enzymes. Today, peptide drugs are being developed to treat some of the most challenging diseases, including HIV, cancer, osteoporosis, and Alzheimer’s disease. 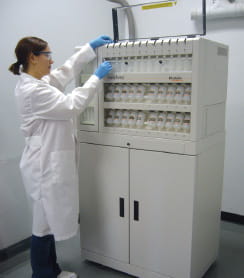 But while the potential of peptides as drugs has always been clear, their introduction onto the pharmaceutical marketplace has been varied and rocky. The first peptide drugs consisted of hormones like insulin, which were produced by direct isolation from animal sources, and injected into patients. The problem with this treatment was that impurities in the animal preparation often caused undesirable side effects at the injection site, such as pain, swelling, and even callus formation. Plus, side effects would change from batch to batch due to the presence of different impurities.1

The desire for purer formulations led to the production of peptide drugs by organic synthesis in the 1950s and 1960s. The first synthetic peptide drug, oxytocin, was isolated and synthesised by Vincent du Vigneaud in 1953, for which he was awarded the Nobel prize in chemistry in 1955.2 Oxytocin is an important peptide hormone used to induce labour in pregnant women. Unfortunately, using the methods available at the time, the synthesis of oxytocin and other small peptide drugs could take as long as one to two years, and was not a very efficient production method.3

This all changed in 1963, with the invention of solid-phase peptide synthesis (SPPS) by US biochemist and another Nobel prize-winner Bruce Merrifield. In SPPS, the peptide is manufactured on a solid resin bead, which allows reagents to be added and filtered away without the lengthy, labour-intensive purification steps in between. This significantly sped up the synthesis process and allowed it to be automated. However, even with these progressions, organic synthesis was still a prohibitively expensive manufacturing tool when large quantities of peptide were needed.

By the 1970s, a milder chemistry using Fmocprotected amino acids was developed for SPPS, and the first commercially available automated peptide synthesisers were introduced. In addition, purification procedures had progressed to a level where even animal preparations of peptide drugs could be completely purified to avoid the unwanted side effects.1