The EU commits to partner with countries on a greener and more resilient future.

With the aim of meeting the goals of the Paris Agreement, and keeping 1.5°C within reach, the European Union (EU) and Egypt are to establish a long-term partnership on renewable hydrogen, which they say will enable them to accelerate the decarbonisation of their respective energy systems.

The partners plan to facilitate and promote investments for boosting the production, storage, distribution and transport of renewable hydrogen and its derivatives. They will also boost cooperation on policy and regulatory frameworks, market assessment, research and innovation to assist the development of a hydrogen economy.

There will also be a push to facilitate access to finance and foster investment along the renewable hydrogen value chain, which includes de-risking mechanisms, cooperation with the private sector, and development of viable investment projects.

In another instance of collaboration between Europe and Africa, von der Leyen and the President of Namibia, Hage Geingob, signed a Memorandum of Understanding (MoU) establishing a strategic partnership between the EU and Namibia, which aims to ensure the development of renewable hydrogen as well as securing a sustainable raw materials supply in pursuit of the digital transition. It is said that the partnership will support Namibia in development of mining and renewable hydrogen value chains. It will also facilitate investment and funding opportunities to modernise Namibia’s industries and drive economic and social development.

Namibia has also signed a joint declaration with the European Investment Bank (EIB) to increase cooperation in support of renewable energy, including hydrogen. A loan of €500 million from the EIB, will be used for long-term, sustainable projects and investment.

Making the most of the gathering of world leaders, President von der Leyen also signed a MoU with the Prime Minister of Kazakhstan, Alikhan Smailov. The agreement is focused on the development of a secure and sustainable supply of raw and refined materials and development of renewable hydrogen and battery value chains. There are several areas of collaboration including: the introduction of new technologies and sustainable practices, and decarbonisation of the critical raw materials value chain including use of renewable energy and digitalisation.

In extending cooperation with Egypt, and reaching agreements with both Namibia and Kazakhstan, the European Union is moving to secure links for its sustainable supply of critical raw materials for the green and digital transition it is pursuing, as well as making good on pledges to assist partners in the clean energy transition. 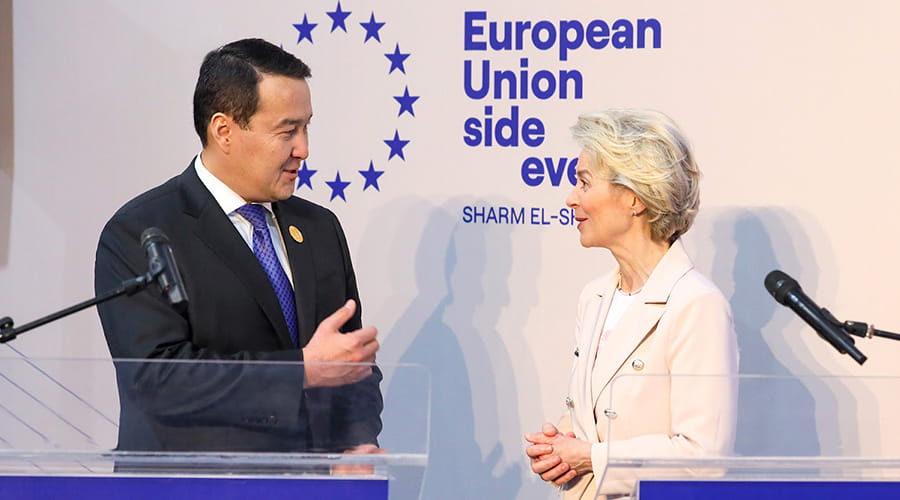 Speaking as the agreement with Namibia was signed, President von de Leyen said: ‘This is not only a huge step forward for the EU’s climate ambitions, but also an agreement beneficial to Namibia, a front-runner in the development of renewable hydrogen in Africa. It shows Europe’s commitment to work with partner countries on our shared commitments to a greener and more resilient future in line with the Global Gateway Strategy.’

The Global Gateway Strategy, which was established by the European Commission at the end of 2021, sets out to deliver sustainable and high quality projects taking into account the needs of partner countries and ensuring lasting benefits for communities.